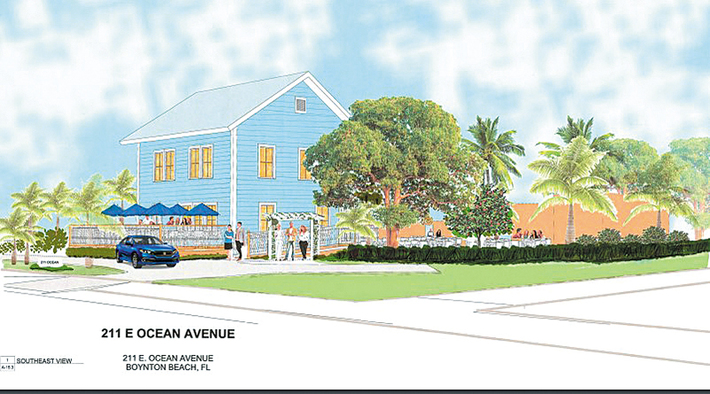 Two new food establishments and a major real estate transaction — all now in the works — could signal a new stage in the revitalization of Ocean Avenue in downtown Boynton Beach.
The city’s goal of turning the street into a South Florida destination spot could come closer to fruition because of changes planned or proposed at some of the oldest buildings on Ocean Avenue. The changes include:
• The $3.6 million sale of a trio of early city commercial buildings — including one housing the Hurricane Alley Restaurant and Raw Bar — to the Community Redevelopment Agency. The CRA would then make the properties available for a larger project on the west side of Federal Highway from Ocean Avenue to Boynton Beach Boulevard.
• The conversion of the historic Magnuson House into an indoor-outdoor restaurant. The century-old Ocean Avenue fixture has been vacant for at least 14 years. The owner of Troy’s Barbeque wants to create an “All-American dining restaurant” on the site, using 40-foot and 20-foot long corrugated shipping containers for the restaurant’s kitchen, bar and restrooms.
• The opening of a gourmet butcher, market, eatery and catering establishment in another pioneer-era building on the avenue. Nicholson Muir Meats is leasing the historic Ruth Jones Cottage and working toward a Nov. 1 opening.

Oyer buildings on the block
The CRA has until the end of the year to lock down the purchase of three buildings owned by the Oyer family that are critical to the agency’s redevelopment plans. The buildings are at 511, 515 and 529 E. Ocean Avenue.
If the CRA can’t close the deal by Dec. 31 with Harvey Oyer, who is representing his family’s properties, then Oyer will likely turn to private developers offering more money. Oyer said he’s willing to sell to the CRA for less than he might receive from a private developer because he needs a quick sale to avoid a capital gains tax hit he anticipates is coming from the federal government.
“It’s driven entirely by tax issues,” Oyer told city commissioners.
Commissioners, who also serve as the CRA board, negotiated details of the sale with Oyer at the CRA’s Sept. 14 meeting. The items include an up-to-$200,000 nonrefundable deposit if the deal falls apart, accepting the buildings “as is,” and allowing yearlong renewal leases with existing tenants that can be terminated upon 90 days’ notice.
Commissioners do not want any leases signed with new tenants, even though such leases would provide rental income to the CRA until a new project moves forward. Commissioners said they want to avoid any additional complications that might surface with new contracts that could interfere with a future redevelopment.
The commission’s position likely will prevent the Surfing Florida Museum from getting available storefront space it wanted to coincide with the Boynton Beach Haunted Pirate Fest and Mermaid Splash, which is set for Oct. 30-31 downtown. Museum officials had hoped to use the space for a pop-up exhibit depicting 100 years of surfing in Florida.
The Oyer properties are to be included in a larger development with CRA-owned properties to the north. The CRA is now accepting development proposals for the 115 N. Federal Highway project.
Oyer also requested that the Oyer Insurance sign painted on one of the buildings be salvaged for its historical value and be placed somewhere visible to the public, which the CRA agreed to do if the cost does not exceed $20,000.
“Over time, every original historic [commercial] building on your original business street has been torn down,” Oyer said. “I think it would be sad to do away with all three of those buildings and signage without the ability to save the signage.”

New interest in old house
A few blocks west on Ocean Avenue, the CRA had been stymied in its attempts to use the Magnuson House in its redevelopment plans. The building has needed costly renovations to enable it to meet code requirements for a commercial enterprise.
Restaurateur Anthony Barber thinks he has a viable alternative: Place all the commercial uses in portable shipping containers, while using the house to seat dinner guests. The revamped storage containers would be behind the house and outdoor seating would be added on patios around the building.
An addition previously placed on the rear of the house would be demolished, said Barber, who also owns Troy’s Barbeque.
City commissioners agreed to work with Barber to see if a financial agreement can be reached on the lease or sale of the CRA-owned property.
However, after Barber notified the city of his interest in the building in July, others have come forward with their own proposals for using the building. Commissioners have given them until Oct. 29 to put together more complete proposals that could be compared with Barber’s.
Two of the plans come from businesses currently in the Oyer buildings that would be displaced by a redevelopment project.
The proposals include:
• Creating a new location for Hurricane Alley. Owner Kim Kelly’s proposal said Hurricane Alley would use the main house for seating guests and office space, with construction of another building behind the house for the kitchen and restrooms, and a tiki hut bar area. The plan also would include a two-year extension of her current lease to allow Hurricane Alley to stay open during the renovations.
• Turning the property into an office and training center for Florida Technical Consultants. The company, a civil engineering firm located in one of the Oyer buildings, wants to provide on-site classes for geographic information system mapping.
• Two separate requests from adjacent property owners. Brian Fitzpatrick wants to combine the site with his property to the north, while Sami and Salam Dagher requested combining it with their land to the west. Either proposal could allow for a larger mixed-use development and both requested the Magnuson House be moved. Commissioners suggested the two property owners should present a combined proposal.
Commissioners said most of the plans lacked sufficient information for them to decide, so they gave the proponents time to submit additional details while the CRA moves forward in its discussions with Barber.
While some commissioners said they eventually see the Magnuson property as part of a larger development, they also said it was possible the development could happen around the restaurant if Barber’s establishment succeeds.
The CRA must decide if it wants to lease or sell the property.
Commissioner Christina Romelus supports selling the property to Barber, which would provide an opportunity to have a local, minority-owned business in the heart of the downtown.
“We’ve seen what Hurricane Alley has been able to do over the last 25 years. What could be able to potentially happen with the Barber family here over the next 25 years if we permit this project to move forward?” Romelus said. “This is an opportunity to make something new, make something that’s different, bring a whole different vibe and essence to our downtown. And I want to see that. That’s a legacy that I’d like to leave behind.”
Commissioner Ty Penserga said a five-year lease with renewal options may be a better idea, to make sure the restaurant can succeed before the CRA gives up control of the property. “In five years, we’ll know where you’re going, if you’re here for the long run,” he said.

Gourmet butcher on way
The former Ruth Jones Cottage looked to be heading for success after being moved several blocks east on the avenue in 2011. It was first home to the Little House Restaurant and later Chez Andrea’s Gourmet Provence. But Chez Andrea’s, a French restaurant, opened just as the pandemic arrived and was not able to make a go of it. It closed in January.
Now James Muir has come to the city from New York and signed a lease for Nicholson Muir Meats, filing his incorporation papers in July. Interior renovations for the new establishment at the cottage were ongoing in September.
Muir owned a catering service and restaurant called Artaux in Sea Cliff, New York. The restaurant, now closed, received an “excellent” rating in a 2015 New York Times review for its “creative and delicious foods.” The catering company is still in business, Muir said.
Muir lives in Boynton Beach and picked the Ruth Jones Cottage because “it is very central to everything” and has “great access to the bridge” connecting to the barrier island communities. “I thought that the specific location was great. It has a lot of character, that cottage.”
The establishment will have a butcher counter featuring wagyu beef from Australia, Japan and the United States, prepared foods and a small restaurant with fewer than 20 seats, Muir said. He plans to offer off-site and on-site catering, Saturday evening tastings and memberships that provide special pricing, products and tastings.
“We’re going to focus more on super high-end products,” Muir said. “We’ll have some retail items … a lot of prepared foods, grab-and-go salads, things like that.”
The restaurant’s operating hours are still to be determined, he said.