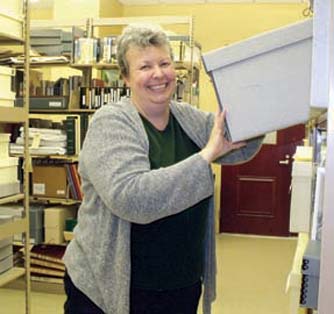 For most people, the box sitting on the table upstairs in the Boynton Beach City Library could easily be nothing more than a collection of old papers tucked inside file folders.

But to Susan Swiatosz, that carton could very well be a treasure chest packed with jewels of local history. Then again, it could be as much a historical void as Al Capone’s vault.

“You never know what you’re going to find when you open a box,” says Swiatosz, who took over last month as keeper of the Boynton Beach City Library’s historical archives. “It could be a bunch of dead bugs or it could be the most important piece of paper ever.”

A modern-day history detective of sorts who spent the last 5½ years as the archivist at the Henry Morrison Flagler Museum in Palm Beach, Swiatosz is now focusing her efforts on continuing to build the collection of papers, photographs and files that fill the shelves of the Boynton Beach City Library archives.

“I like puzzles,” she says. “In an archive you’re dealing with unique papers and materials and there’s the puzzle of figuring out how to organize what you have and how you’re going to make it accessible.”

Another of her challenges is making sure the community knows about the nuggets of historical gold that can be mined.

One way Swiatosz hopes to get the word out is by continuing the tradition of hosting exhibits like those started by her predecessor, Janet DeVries, who left in November to become an archivist at Palm Beach State College’s Harold C. Manor library.

A possible exhibit, she says, could be based on the 17 boxes of files and folders donated to the archives by the Boynton Beach Woman’s Club, which includes everything from financial records to names of those who won the club’s fashion shows over the decades.

Open to the public by appointment, the archives are often thought of as the domain of writers and researchers working on scholarly tomes. But these collections are also available to students in need of historical facts as well as residents trying to learn more about a long-lost relative.

Helping every visitor find the information they’re looking for is what’s Swiatosz’s job is all about and the first order of business is making sure she knows where everything is on those rows of shelves. It’s a task that meshes perfectly with her organizational skills.

“I love organizing things,” she said. “It’s just my thing.”

Armed with a passion for preservation, and a master’s degree in it from Colombia University, Swiatosz spent two decades helping restore old buildings in New York City before deciding to shift gears and start a second career as a librarian.

“It made me think about how short life can be,” she said. “I put my apartment up for sale and said, ‘if it sells, I’m going to library science school.’ ” And she did. Graduating from the School of Information and Library Science at the Pratt Institute in New York before taking the position at the Flagler Museum.

For Swiatosz, her training in libraries and preservation blends perfectly with her new job.

“If I could have hand-picked someone to succeed me as Boynton Beach City Library archivist, it would have been Susan Swiatosz,” DeVries said. “Like me, Susan has a love of history and a tenacity for finding the answers to obscure questions.”