The Boynton Beach fire station that serves much of Ocean Ridge will be finished in February, said Fire Chief Glenn Joseph.
Firefighters/paramedics will be able to move in the week of Feb. 22, Joseph said. 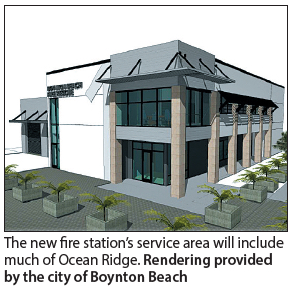 The new station will sit one block off Northeast First Street in the Town Square, and will respond to fire-rescue calls east to Ocean Ridge, west to Old Boynton Road, south to Southeast Sixth Avenue and north to the Boynton Canal.
The construction of Fire Station 1 was halted in late August by the approach of Hurricane Dorian, pushing back the scheduled opening, but it proceeded through rains in early October.
“Work was shut down a few days before the projected arrival of the hurricane,” Joseph said. “Then, it took a week to get the contractors back on the site.”
Emergency calls to the barrier island are mostly medical, Joseph said. Fire Station 4, on South Federal Highway, responds to most of the incidents in Briny Breezes and the south end of Ocean Ridge.
When finished, Fire Station 1 will have two brass plates. A 50-year-old one will commemorate when the original station was finished in 1969, listing the names of the mayor, city commissioners and city manager.
A new plate dated 2020 will go underneath, Joseph said. It also will list the names of the mayor, city commissioners and city manager.
Retired Fire Capt. Mike Smollon has parts of the fire pole from the old Fire Station 1. Smollon, who lives in the County Pocket, will donate it so that it can be displayed in the new station.
“But we have to move in first and then determine an area for the display,” Joseph said.

Town Square details
The new fire station is part of the city’s massive Town Square project that officials hope will create a downtown. The 16-acre development is a public-private partnership of the city, its Community Redevelopment Agency and the development team of E2L Real Estate Solutions.
Its boundaries are Seacrest Boulevard on the west, Boynton Beach Boulevard on the north, First Street on the east and Southeast Second Avenue on the south.
The project also includes the renovation of the city’s historic high school, a new City Center that combines the city hall and public library, the current Children’s Schoolhouse Museum, a parking garage, play areas and an amphitheater.
The high school work will be finished in November. A person was hired in September to determine rental rates for the second-floor auditorium and other rooms.
The first floor will house arts and exercise classes formerly held at the Civic Center and Madsen Center, which were demolished to make way for Town Square.
But the staff move-in date has not been determined, said Eleanor Krusell, city spokeswoman. Parking remains problematic while Town Square is an active construction zone.
In other city news, Boynton Beach will hold its second pop-up dog park from 9 a.m. to noon Nov. 23 at Oceanfront Park. The dog area likely will be on the southern half of the beach, said Wally Majors, Recreation and Parks director. No admission will be charged.