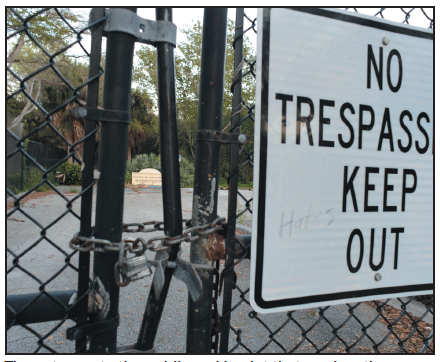 The entrance to the public parking lot that services the walkway has been locked after the city and Catholic Diocese could not agree on lease details for the parcel behind St. Mark’s Catholic Church. Jerry Lower/The Coastal Star

Boynton Beach residents and other nature lovers no longer have access to a 4.8-acre mangrove parcel that sits on the Intracoastal Waterway behind St. Mark’s Catholic Church.
The mangroves’ owner, the Catholic Diocese of Palm Beach County, and the city of Boynton Beach could not agree to new terms after the lease expired on June 30.
In mid-October, the City Commission voted 5-0 to not renew the lease. At the time, Mayor Steven Grant said he had not received any complaints since the park closed in July.
“I used to go down there once a week,” said Steve Plaisance, who lives about two blocks away from the mangrove parcel. “It was a pretty neat walk.”
When Plaisance returned for another mangrove walk this year, the parcel was locked.
For 27 years, the city had leased the land from the diocese for $10 a year. The parcel sits south of St. Mark’s and behind the Casa Costa condominiums.
The diocese wanted to increase the rent to $12,000 annually, paid in advance, to have the city repair the metal walkway and fix the restrooms, and to increase its liability insurance to $3 million.
Diocesan attorney Thomas Courtney sent the city a letter on July 22 with these terms: a one-year lease with automatic renewals unless terminated by either party with a six-month advance notice.
But the diocese did not want to enter a long-term lease and never said why, Assistant City Manager Colin Groff said Feb. 18.
“They just said that’s the way they do it when leasing their properties,” Groff said.
To fix the walkway, make the restrooms handicapped-accessible and make other upgrades would cost more than $1 million, according to city estimates.
“We can’t spend that kind of (taxpayer) money if they won’t give us a long-term lease,” Public Works Director Andrew Mack said Feb. 18.
It will take the city a while to get the permits to remove the walkway, Mack said.
The diocese sent the city a reminder letter in mid-December that it would charge the city $1,000 a month rent until the property is returned.
The diocesan real estate manager, Daniel Lewis, recently declined to comment, saying the diocese was not in control of the mangrove parcel.
All is not lost, according to Groff.
“We still own a mangrove parcel to the south,” he said, and it’s of similar size.