Boynton Beach’s two top public safety officers — the police and fire chiefs — have been elevated from interim to permanent status.
Interim City Manager Jim Stables, in announcing the appointments last month, said he hoped the promotions would bring stability to the city’s leadership team, which has been in flux since early spring. 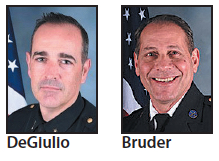 Police Chief Joseph DeGiulio had served as interim chief of the Boynton Beach Police Department since May, when acting chief Vanessa Snow left the force.
Fire Chief Hugh Bruder stepped up to serve as interim chief in April when Stables, the former fire chief, left his post to serve as interim city manager.
Both DeGiulio and Bruder have extensive leadership experience.
DeGiulio has been with the Boynton department for more than 20 years. Before becoming interim chief, he served as assistant police chief for the uniform services division.
DeGiulio brought advanced training programs to the department, including tactical first aid, fair and impartial policing and de-escalation.
He was also responsible for implementing the body camera program, the Narcan/naloxone program and tactical fitness and wellness programs.
The police chief earned a master’s degree in leadership from Palm Beach Atlantic University, and a bachelor’s degree in police studies from John Jay College of Criminal Justice in New York City.
Bruder has had more than 42 years of fire service experience. He joined the Boynton Beach Fire Rescue Department in 2020 as deputy fire chief. Since then he has reorganized the department’s administration so that more firefighters could be deployed in the field.
His other priorities have been fostering labor/management relations; improving staff morale; and helping secure grants for a new fire boat, EMS equipment and infrastructure for emergency communications.
Bruder also revamped critical incident management and peer support programs for the police and fire departments, and helped create a new community outreach program.
Bruder, an Air Force veteran, holds an associate’s degree in emergency medical services, and a bachelor of science degree in public administration/fire service management — both from American Medical Academy in Miami.
“Both of these public safety leaders have spent a lifetime nobly serving others, while qualifying and climbing the promotional ladders in their respective areas and collaborating to enhance the mental wellness of their employees,” Stables said in a prepared statement.
“These well-deserved promotions will bring further stability to our leadership team and to the overall public safety of the community.”