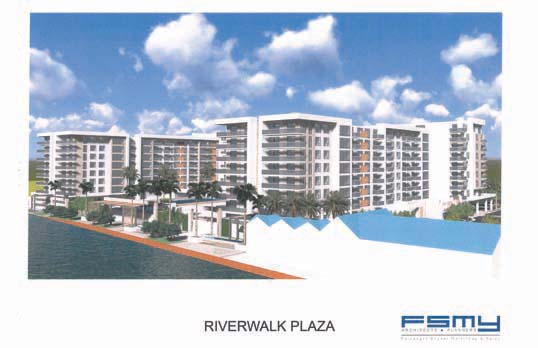 With the silhouette of the existing Prime Catch in the foreground, the developer’s plans call for 328 apartments

in a U-shaped configuration to make the most of the site’s waterway frontage.

The Riverwalk Plaza owners want to demolish the vacant Winn-Dixie building and replace it with a 10-story, U-shaped building with 328 apartments to take advantage of the Intracoastal views. The nearly 10-acre shopping center sits at the southwest corner of the waterway and Woolbright Road in Boynton Beach.
Isram Realty, based in Hallandale, will submit site plans in mid-October, said Shaul Rikman, company founder and chairman. “Everyone will be happy with what they see,” he said.
The plans end nearly 10 months of speculation about what would happen to that prime slice of real estate when Winn-Dixie announced it would close some of its grocery stores.
Rikman’s company purchased the center in March 2011 from Woolbright Development in a short sale, meaning the owner owed more money than the property was worth.
In April 2007, Woolbright paid $16 million for the shopping center, plus $2.5 million for the vacant 3.2-acre, landlocked parcel south of the center. It took out a $14.75 million mortgage on the shopping center and the vacant parcel.
Isram Realty, on the other hand, paid $9.5 million for the center and an extra $500,000 for the vacant parcel. Andrew Mack, interim planning and zoning director for Boynton Beach, said the mostly residential project fits the downtown master plan. He suggested adding some retail to the apartment building.
The owner will have to do a traffic study showing traffic generated and the impact on surrounding roads because it will seek a land use change from commercial to mixed-use, Mack said.
Luke Therien, whose family owns the nearby Prime Catch restaurant along the Intracoastal, is in discussions to do a land swap with Isram Realty.
“Part of the land we own is a quarter-acre parcel that sits south of the restaurant. They would like to gain access to it,” Therien said. “It will have to be a win-win for both parties or it won’t happen.”
Prime Catch diners now self-park in front of the Winn-Dixie building. The restaurant offers a valet service that parks vehicles south of the building.
Wendy’s and the Wells Fargo bank branch will stay where they are because they each own their parcels, Mack said. “Wendy’s will be modernized at the same time the center is redeveloped,” he said. “Wells Fargo was done at the time it bought the bank branch.”
The other building, owned by Isram, contains a Walgreens drugstore and a Jo-Ann Fabric and Craft store; it would stay and be updated, Mack said.
The newest tenant in the Winn-Dixie building, Bond en Smolders bakery and coffee shop, just opened Aug. 21. Co-owner Patty Smolders is not worried. She and her husband, Ralph Bond, have a five-year lease with an option to renew for another five years.
She hopes the owners find a place for the shop in the project or “they will have to buy us out.”