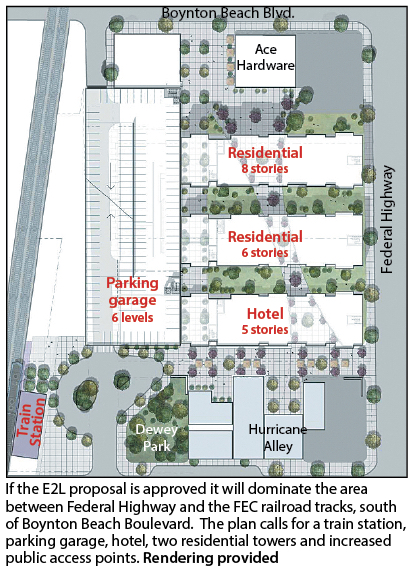 The lead developer of Boynton Beach Town Square wants to put its mark on a second city-owned property critical to downtown revitalization.
E2L Real Estate Solutions LLC would create a destination spot with walkways running through a hotel and two apartment buildings — all three providing ground level shops and restaurants — and alongside outdoor landscaped and gathering areas. The project between Federal Highway and Northeast Fourth Street would also include a parking garage and potentially a train station.
The E2L proposal — called Banyan Oasis — puts the company in competition with a separate group of developers that submitted its own ideas in August for the land immediately north of Hurricane Alley Raw Bar and Restaurant on Ocean Avenue. The city’s Community Redevelopment Agency purchased the 2.6-acre site for $3 million in 2018.
“The current situation of 2020 has taught us that outdoor areas and recreational spaces are necessary for the mental and physical health of the community. This urban development brings contemporary ideas for the design of the future,” says the E2L proposal. Company President Mark Hefferin wrote that his proposal takes into account “post-COVID‐19 considerations.”
City commissioners, who make up the city’s CRA board, have not reached consensus on how to move forward with the CRA’s 115 N. Federal Highway property. The site is several blocks east of Town Square, which includes a new City Hall and library and renovation of the Old Boynton Beach High School as a cultural center.
Commissioners discussed but took no action on the earlier proposal at the CRA’s Nov. 10 meeting and didn’t review the Banyan Oasis proposal, which had been received only a day earlier. Both proposals were unsolicited.
Commissioners could decide to work with the developers of the original proposal, consider the additional proposal or have the city come up with its own ideas for the site and put out an official request for proposals, or RFP. An RFP would invite others to propose how they would develop the site to meet the city’s goals.
“I haven’t been swayed one way or another. I’m more in neutral in all this,” Commissioner Christina Romelus said at the end of the commission’s discussion about the property.
The original proposal, submitted by a group called Ocean Avenue Residences and Shoppes LLC, has run into resistance from Hurricane Alley owner Kim Kelly, who says the downtown area doesn’t need another mixed-use development. She said the plan, developed by William Morris of Southcoast Partners and Max and Harold “Sonny” Van Arnem of Van Arnem Properties, won’t attract the people needed for downtown businesses to prosper. She started an online petition that has amassed more than 4,200 signatures opposing the plan and mixed-use developments in general.
Kelly had not reviewed the Banyan Oasis proposal yet, but she has talked with Hefferin and thinks the hotel it includes is critical to downtown’s success.
“We’re going to get more business from tourists than people that are living here,” Kelly said. “We feel for the whole downtown, that a hotel would be much more beneficial to all the businesses around here, rather than just another mixed-use, another 250 apartments.”

Kelly, concerned that business voices aren’t being heard, in November began forming the Downtown Business Coalition for a Brighter and Better Boynton Beach. She said it has been a long time since a group represented downtown business interests. Within a few days, she said, she had positive replies from about 10 businesses and she planned to hold the group’s first meeting Dec. 1.
The coalition’s meeting was scheduled so that it could take place prior to the CRA’s Dec. 8 meeting, when commissioners are expected to discuss the two proposals.

Banyan Oasis proposes 220 apartments, 34,000 square feet of retail space, a 130-room hotel and a 686-space garage, while the Ocean Avenue Residences plan calls for 229 apartments, 18,000 square feet of commercial space and a 544-space garage.
Banyan Oasis would provide 150 public parking spaces in the garage and Ocean Avenue Residences 120, but both say they could add more based on the city’s desires.
Ocean Avenue Residences estimates its project at $65 million, while Banyan Oasis pegged its development at about $107 million, including $14 million in public financing for the parking garage.
Each includes an eight-story building as its tallest structure.
The Ocean Avenue Residences proposal currently encompasses just the city-owned property, while the Banyan Oasis developers include the integration of the Davis Camalier Federal Highway property rented out to Boardwalk Italian Ice & Creamery.
Both proposals contemplate a Brightline train station if the city were to secure a future stop on the passenger rail service line. The two plans incorporate the city’s Dewey Park on Ocean Avenue into their overall designs and turn the alleyway behind Hurricane Alley into a dynamic part of their pedestrian experiences.
Commissioner Justin Katz said he is leaning toward supporting an RFP, while Mayor Steven Grant said he would be comfortable trying to work with the first proposal from Ocean Avenue Residences.
“I don’t want to just keep on doing studies and RFPs. I’d like to see what we can do with the developer on hand,” Grant said.
Commissioner Woodrow Hay disagreed.
“I don’t want to rush this because this is going to stand for the next hundred years or more,” Hay said. “I don’t want it to be said that we did anything that was shady, not that I’m suggesting that anything is shady. … Let’s get the best package that would be best for Boynton. If it takes a little bit longer, it takes a little bit longer.”
Commissioners are also interested in expanding development of the site to include other adjacent properties between Ocean Avenue and Boynton Beach Boulevard.
“We need to work with a partner to expand the CRA’s portion of the land, as the center portion excludes the valuable property along Boynton Beach Boulevard, Ocean Avenue and has a very small frontage on Federal Highway,” Grant said.
Both project teams say they are willing to pursue additional parcels.
Sonny Van Arnem told commissioners his team would issue nonbinding letters of intent to adjacent property owners to purchase parcels to increase his project’s footprint. He also said he had spoken to a representative of the Oyer family, which owns three adjacent parcels on Ocean Avenue, including Hurricane Alley. Van Arnem said he was told the two closest to Dewey Park were negotiable, but that the Hurricane Alley property would not be for sale.
“I think it’s perfect where it is and should stay where it is,” Van Arnem said of Hurricane Alley.
The Banyan Oasis proposal also would leave Hurricane Alley where it is.
Hay said other adjacent properties, which include the Ace Hardware store on Boynton Beach Boulevard, should also be considered.
“The property at the north end of [the CRA land], it would be ideal to have that,” Hay said.