Part of the library would become a City Hall addition. Across Ocean Avenue

from the proposed City Hall is the historic high school. This view is

looking to the southeast. Seacrest Boulevard is in the foreground.

City residents should soon have a walkable downtown with open spaces and tree-shaded streets as well as their beloved, historic Boynton Beach High School restored to its 1920s glamour days and in use again.
In mid-April, the Boynton Beach City Commission unanimously agreed to work with E2L Real Estate Solutions of Winter Park.
That allows the city manager to craft a public-private partnership with E2L, outlining the first phase of the $250 million deal. It will include deadlines and financing methods to pay for the public and private portions.
The E2L team wants to build apartments, assisted-living units, a hotel and three parking garages.
The first phase also will include “a guaranteed maximum price of the buildings … and possibly start of the rehab work on the old high school,” Colin Groff, an assistant city manager, told commissioners April 17.
Groff gave commissioners an ambitious schedule for the first phase, saying it could return to them for approval in June.
“I like that they are keeping the historic buildings,” said Susan Oyer, a longtime resident who sits on the city’s Historic Resources Preservation Board. “They are keeping the trees, the playground — all of the things the residents care about.”
If all goes according to the plan, residents will be able to attend charettes in the summer to have their say on the designs of the public buildings, the interior layout of the old high school, the open spaces, the amphitheater, the playgrounds, the landscaping and signs, Groff said.
He advised residents and commissioners not to think that the public buildings would look like what E2L’s architect proposed: in particular, the glass building to be City Hall.
“It looks hideous. It’s more appropriate for a newer city,” said Oyer, a fifth-generation Floridian who is a public school teacher. “Boynton needs a more appropriate look that would adapt pieces of the Addison Mizner plans.” 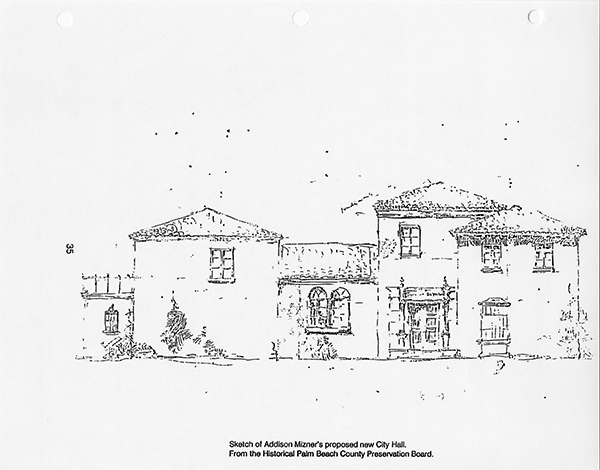 In the 1920s, architect Addison Mizner sketched out his idea for Boynton Beach City Hall.

In the 1920s, Mizner presented a rough sketch of what a two-story Boynton Beach City Hall would look like using his Mediterranean Revival style of architecture. But the city soon went bankrupt and had to sell off a piece of its oceanfront land to repay debts.
The Mizner sketch lay unused for decades until 1987, when the leader of the city’s Community Redevelopment Agency wanted to resurrect it as the plan for a new City Hall. That did not happen.
Oyer will send commissioners and Groff the Mizner sketch with her ideas on how it could be turned into a three-story building.

Team named at meeting
In late March, E2L introduced its team to the city selection committee.
The master developer is Mark Hefferin of E2L Holdings in Winter Park. Information supplied to the city says that the company has more than $1 billion in construction experience.
At the selection committee presentation, Hefferin mentioned the possibility of the hotel carrying the Guy Harvey brand. A Guy Harvey spokesman said it was too soon for the company to say yes or no to the project.
Hefferin’s team includes developer John Markey, whose JKM Developers of Boca Raton built the Cortina residential project and nearby dog park in western Boynton Beach.
“We are the hometown guys backed by the largest financial company internationally,” Markey told the selection committee. “We are the financial solution.”
Markey proposes turning the 16 acres of Town Square into a community development district with the private buildings financed by BlackRock bonds sold to investors. That structure calls for the city to make an agreement with its CRA to have the increase in taxable values of the private buildings used to make the annual bond payments to investors.
Markey said he became involved with BlackRock in 2010 when a BlackRock entity approached his firm to invest in distressed properties in Florida.
For his part of Town Square, Markey wants to build independent-living townhomes for older residents and a multistory building that offers assisted care.
The E2L team also includes architect Rick Gonzalez of West Palm Beach, who told the selection team: “I’ve been waiting 16 years to work on the high school.”
His historic restoration projects include Mar-a-Lago, President Donald Trump’s Palm Beach estate that was turned into a private club. Gonzalez recently helped design a helipad on the historic estate that can withstand the weight of a Marine One helicopter, needed after Trump was elected president.
“I’m glad Markey and Gonzalez are involved,” said Barbara Ready, chairwoman of the Historic Resources Preservation Board. “They like to listen to the people.”
A possible kink in the high school plans comes from Juan Contin, who is appealing his state court loss. He has until May 15 to file paperwork that explains the legal reason why his case should be reconsidered. Contin, an architect, sued in 2013 after the city wouldn’t let him turn the high school into an events center.
Local lawyer Michael Weiner will take the Town Square plans through the city’s development approval process as part of the E2L team.
“We need to get the people here first,” Weiner told the selection committee. “Then the sky’s the limit of what can go in here — possibly even a grocery store.”
The project’s boundaries roughly are Boynton Beach Boulevard on the north, Seacrest Boulevard on the west, Southeast Second Avenue on the south and Southeast First Street on the east.
Hefferin’s team also has former state Rep. Sharon Merchant, who owns a marketing company. “We understand that the most important thing for you is that your constituents are knowledgeable,” she told the selection committee.
Her firm will do that by having webcams on the project, putting out social media posts, producing newsletters and hosting hotlines.
Nancy Franczak-Stewart, promoter of GarlicFest, also is involved. She told the selection committee: “My events put Delray Beach on the map. I look forward to bringing that experience to you.”
E2L Solutions paid $100,000 when it was selected, to be used to evaluate its proposal. At the May 2 commission meeting, Stantec Consulting Services of Tampa was hired to help the city define the Town Square deal and provide financial analysis. The contract has a cap of $90,000.
Mayor Steven Grant said he is eager for Town Square to start.
“It’s an extremely exciting time in Boynton Beach,” he said. “The challenge will be to keep the momentum going.”