A high-rise would fill the former Bank of America land at Federal Highway and Ocean Avenue. Rendering provided

Towers of offices, rental apartments, shops, restaurants and a hotel would further fill in the Boynton Beach downtown if a proposal enthusiastically supported by the Community Redevelopment Agency and its board — over the objections of some residents — becomes a reality.
A project in one of the most prominent spots in the city — the former Bank of America land at the northeast corner of Federal Highway and Ocean Avenue — would include the new headquarters of Kanner and Pintaluga, a fast-growing personal-injury law firm that’s looking to move from Delray Beach into a larger space. The rest of the project would be developed by One Boynton LLC, a subsidiary of Washington Real Estate Partners, which has developed projects of all kinds in South Florida and Washington, D.C.
CRA officials praise the proposal’s Class A office space — it would be the first such building in the downtown — and they like that portions of the site would be publicly accessible.
They are so eager to see the project built that they’ve offered a CRA-owned, half acre of land, free of charge, to the developers. They say that the narrow strip of land isn’t practical for development on its own, anyway. It would be joined with Washington Real Estate’s three acres to the south.
Residents at April’s CRA meeting said they felt blind-sided by the project — one said the high-rises are an unfortunate addition to “The Great Wall of Boynton.” But board members pointed out that it was the first publicly held meeting on the proposal and that more public meetings would be held.
“We’re not doing it the last minute,” Mayor Jerry Taylor said. “Tonight is the first time we’re hearing about it. It’s being proposed to us this evening …. There are going to be many more meetings about it.”
The project’s site plan will have to come back to the City Commission for approval, but the project, as presented, does not require any changes to zoning and has no obvious barriers to getting a green light under city development rules — several other projects as tall, or taller, are already built.
Still, residents seemed taken aback by the level of detail already fleshed out about the proposal — such as its 50,000 square feet of office space, its 282 residential units and its calculation of a $562,004.93 boost in property taxes — and by the CRA board’s apparent support for the proposal before any public input had been given.
“This time of year when everybody on the condo association is heading home, you bring up this stuff,” said James Lynch, who lives in a condo about half a mile from the site. “Why do we always have to see big, big buildings going up?”
CRA officials reminded residents that the city’s master plan would already allow a similar project to be built, even without the offer of the narrow strip of CRA property.

Timeline questions
What city officials have been saying about the project includes some inconsistencies.
CRA executive director Vivian Brooks told The Coastal Star that Kanner and Pintaluga came to the CRA in January, asking about the CRA land.
“They were looking for our little piece” of land, she said. The land “wasn’t feasible” for their project, so “I said, ‘You need to get in touch with this guy,’ ” F. Davis Camalier, the chairman of Washington Real Estate.
And CRA documents describing the request for proposals — the way government land is offered to potential buyers — say, “They have identified 222 N. Federal Highway as one of the sites they are interested in purchasing.”
But Howard Kanner, the law firm’s founder, said it was the CRA that got the ball rolling. He said Brooks approached him about the possibility of building on the land.
“She came over and spoke to me about Boynton Beach,” Kanner said. “I had never heard about it until I heard from Vivian.” She sold him on the city’s vision for the downtown, Kanner said.
Now, he said, “Boynton Beach is our No. 1 option.”
At the April meeting, representatives of Washington Real Estate told the CRA board that the law firm would bring about 200 employees to the downtown upon move-in, and will have room to add more. In an interview, Taylor said he’s excited to have “a couple hundred attorneys” coming to the downtown to work.
Kanner, though, said in an interview that the firm has only about 125 employees — including about 25 attorneys, 25 paralegals and 75 other staff members including receptionists and researchers — working in Delray Beach. The firm would probably start with 150 employees in the Boynton Beach location, but has plans to grow quickly, Kanner said.
“I would envision in five years it could be 300 to 400” employees, he said.
The language of the request for proposals was geared all along toward a union between Kanner and Pintaluga and Washington Real Estate.
It was ostensibly open to anyone who wanted to respond, but one of the criteria for judging the responses was “opportunities to incorporate the RFP site into a larger overall site plan and redevelopment of one or more adjacent parcels for larger scale development.” The only empty piece of land next to the CRA land belongs to Washington Real Estate.
“The obvious responder would be the adjacent landowner,” Brooks said. “We don’t want to leave our little piece of land standing there. That wouldn’t make sense from a planning perspective.”
The CRA bought the land for $900,000 in 2002 for the extension of Boynton Beach Boulevard and access to Marina Village. Until recently it had been used for a weekly Green Market.  According to the Palm Beach County property appraiser, the CRA land now has a market value of $425,000.

Campaign contributions
Camalier, who owns a villa in Manalapan, donated $500 — through one of his corporate entities — to Taylor’s political campaign on Feb. 7, five days before the request for proposals was approved by the CRA board. And, through three more corporations, he donated an additional $1,500 to Taylor on March 1.
Taylor, who said publicly that he met with Camalier three times about the project before it was formally unveiled, said the donations were not geared toward generating support for the project proposal.
“No, I don’t think so at all — he’s been around for a long time,” Taylor said. Instead, he thought Camalier was hoping for Taylor to get re-elected to bring more stability to the City Commission.
“That does not entice developers when commissioners are at odds,” he said.
Taylor, after lengthy discussion at the April meeting, saved the last word for himself and asked the developers to get the whole project built twice as fast as their six-year timeline.
“I’ve been trying to develop this downtown for more than 10 years,” he said. “Be aware that we want to move on this
thing.” 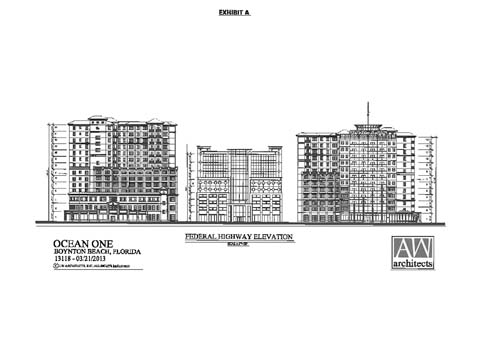 About the project
The 222 N. Federal Highway project being proposed by the Washington Real Estate Partners and the Kanner and Pintaluga law firm. All are estimates and the details are subject to change:
* 282 residential units
* 18,505 square feet of retail
* 67,452 square feet of office
* 120 hotel rooms
* 1,168 parking spaces
* Public areas: public walkways and a plaza
* Tax boost if fully developed as proposed: $562,000
* Total cost to build as proposed: $128.7 million

Phase 1: A nine-story, 50,000-square-foot office building, with 300 parking spaces, to be paid for and occupied by the Kanner and Pintaluga personal-injury law firm. This would be the first Class A office space in downtown Boynton. Proposed completion: Feb. 2015

Phase 2: A 14-story, high-density residential tower on the property’s north side, to be developed in partnership with a high-rise residential developer. Proposed completion: April 2017

Phase 3: A 13-story residential tower on the south side. Proposed completion: June 2018