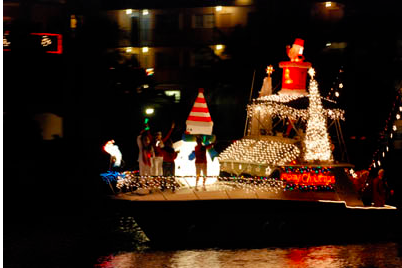 The pandemic claimed another victim when the Boynton Beach-Delray Beach holiday boat parade was canceled on Oct. 13.

“How would we allow people to come out and safely watch the boat parade,” asked Michael Simon, executive director of the Boynton Beach Community Redevelopment Agency, at its monthly board meeting.

Since Covid-19 arrived on the scene in mid-March, no large events have been held in Palm Beach County. Covid-19 is a respiratory illness that can be fatal.

The Boynton Beach CRA had allocated $14,750 to host the event with holiday-decorated boats traveling down the Intracoastal Waterway into neighboring Delray Beach.

Delray Beach has reimbursed the Boynton Beach CRA for 50% of the shared expenses related to event marketing, including T-shirts, participant prizes and the awards dinner in 2017, 2018 and 2019.

“I’m leaning toward not continuing this for now,” said CRA Vice Chairman Ty Penserga. “It’s hard to proceed without our partner.”

CRA Board Chairman Steven Grant asked whether the agency had money allocated to light up Ocean Avenue.

The city of Boynton Beach has already canceled its Holiday Parade.

Grant also asked for a holiday raffle to promote the businesses in the Boynton Beach CRA district.

The holiday boat parade is something the Boynton Beach CRA does well, Grant said. “But we don’t want to be part of a super-spreading event.”