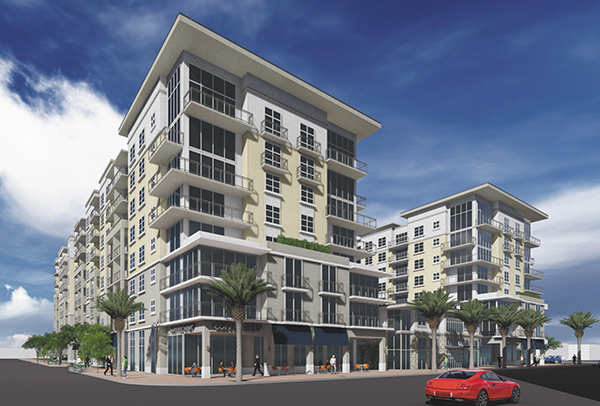 Boynton Beach commissioners, sitting as the city’s Community Redevelopment Agency board in early July, unanimously approved a subsidy worth about $4.1 million to the developer of Ocean One.
The first phase of the project will be an eight-story complex with 231 apartments on Federal Highway, just south of Boynton Beach Boulevard. The subsidy will be spread over eight years.
As a part of the subsidy approval, the developer will build 8,765 square feet of retail space on the ground floor, create 50 public parking spaces, make a diligent effort to hire city residents and contractors, hold a job fair and use green-building standards.
It took nearly two years to get to this agreement.
“It’s a large development,” said Bonnie Miskel, the developer’s attorney. “It took us that amount of time to usher through the process.”
The second phase of the project, with at least 100 hotel rooms, will come back this month for its taxpayer dollar request of about $2.8 million.
The board members wanted the hotel to be built first, but the developer asked for this to be included in the second phase. An additional 50 public parking spaces will be included.
For both phases, developer Davis Camalier is asking for additional money: 75 percent of the difference in the project’s assessed value in the first seven years after it is built and 50 percent in the last year. He paid $9 million for his 3-acre property in 2005.
The agency’s advisory board had recommended capping that taxpayer dollar amount in case the property values soar, but the cap was not part of the agreement. Instead, Mayor Steven Grant, who also is the agency chairman, asked that the agency hold back the entire taxpayer subsidy if the retail space is not filled in the first phase. He did not want to have another Casa Costa, with a mostly vacant ground-floor retail space fronting Federal Highway. Casa Costa is adjacent to the Ocean One property.
“That would be the tail wagging the dog,” Miskel said in July. “We don’t have control over the market. The developer is motivated to fill the space for the apartment tenants.”
Board member Christina Romelus said holding the developer to a performance standard is not unfair, “You are talking about taxpayer dollars.”
Miskel and agency board members compromised: No requirements of filling the retail space in the first year, 25 percent in years two and three, and then 50 percent in years four, five and six after the complex is built. If the retail space is not filled according to this plan, the agency can withhold 10 percent of the taxpayer subsidy.
“But that’s only for the first [retail] tenants,” Miskel said.
The CRA also agreed to sell a half-acre parcel, appraised at $480,000 in December 2015, for $10. City commissioners must approve the sale because it is below market value.
As part of negotiations, the Ocean One developer agreed to turn the agency-owned land into a public plaza.