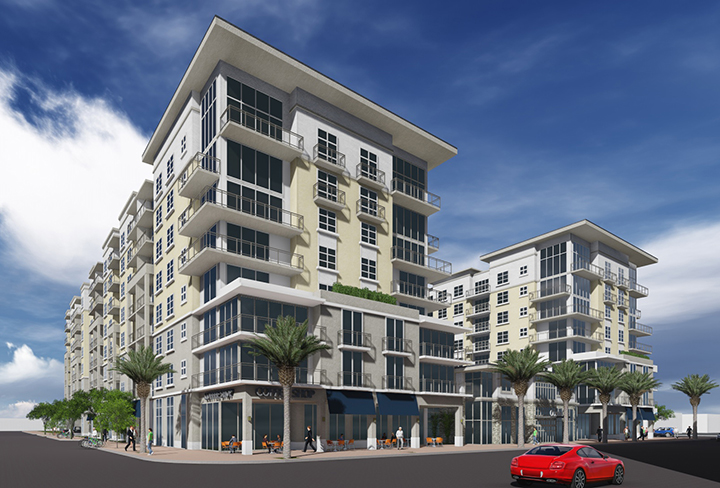 The eight-story Ocean One proposal might be joined later by a hotel and a larger, 15-story condo to the south.

In a surprise move for area waterfront residents, the Boynton Beach Community Redevelopment Agency and investor Davis Camalier are working to make an eight-story apartment complex planned for the southeast corner of Federal Highway and Boynton Beach Boulevard a reality.
The day before the agency’s March meeting, its attorney gave the go-ahead to add the Ocean One project and adjacent CRA-owned land to the agenda. Camalier’s team wants the CRA land, a .47-acre parcel recently appraised at $460,000, for $10. The board accepted his letter of intent by a 4-1 vote.
Then-Commissioner Mike Fitzpatrick objected.
“I am not in favor of doing such a deal early on; [if so], the weaker the city’s bargaining position will be,” he said. “We should not be flying off and giving something away without understanding the whole project.”
Fitzpatrick was defeated in the March 15 municipal election.
CRA Executive Director Vivian Brooks said the agency bought the parcel as part of a land deal in 2002 for $900,000. “We lost a lot of it to the improvements” of Boynton Beach Boulevard, she said. She recommends transferring the CRA property at the time Ocean One gets its construction loan. Including the CRA’s land, the the project is 1.98 acres.
Brooks told the CRA board that the Ocean One development team did not ask for other incentives. Brooks also said the developer agreement would be ready to review at the May 10 meeting.
Mayor Jerry Taylor, who also sits as the CRA chairman, revealed he had met with Camalier and his partner, Bill Morris, to discuss Ocean One. Morris also is involved in Hudson Holding’s project, Swinton Commons, in Delray Beach. Plans there call for demolishing eight houses and buildings and moving eight historic houses.
Camalier teamed with Morris, a real estate developer who built the Worthing Place apartments in Delray Beach. They have been friends for 10 years, Morris said. He described Camalier as more of a real estate investor who needed help with the development side. No other investors are involved, he said.
“The piece of [CRA] property is critical to our moving forward,” Morris said.
“Camalier bought at the height of the market that was followed by a steep market correction,” Brooks said. Values still have not returned, his attorney, Bonnie Miskel, wrote in a March 8 letter explaining why her client wants the land for nearly nothing.
Ocean One plans, submitted a few days before the CRA meeting, call for 237 apartments, varying in size from a 560-square-foot studio to a 1,600-square-foot, two-bedroom, two-bath apartment.
A six-story garage would sit behind the horseshoe-shaped complex. The garage’s first floor would have 36 spaces for visitors and guests. The remaining floors are for apartment residents and would have a security gate that can be accessed by a key fob, Morris said.
“We want to do as high-quality, upscale project as we can afford,” Morris said. Doing so would require incentives from the CRA to help offset the lower apartment rental rates in Boynton Beach, similar to what the nearby 500 Ocean apartment complex received.
The Boynton Beach submarket, east of Interstate 95, commands rental rates that are 50 cents to 70 cents a square foot lower than in Delray Beach, Morris said. As an example, he said, Worthing Place gets $2.60 a square foot, while starting rental rates at Ocean One would be $1.90 a square foot.
“It may increase, but that’s where we are starting out,” Morris said. “Without incentives, we could not finance the project and get it going.”
Camalier still owns the southern part of the former Bank of America parcel. The second phase calls for a hotel in the southwest corner of the parcel, Morris said. The CRA told him to talk with Guy Harvey Resorts as a possible hotelier when they are ready to tackle that phase.
The third phase would be a 15-story condo on the southeast, according to Morris. “It’s not as important for the hotel guests to have waterfront views as it is for the condo owners,” he said.
The new coalition of Intracoastal residents will monitor the project, said Kristine de Haseth, executive director of the Florida Coalition for Preservation, which created the Boynton Coalition for Responsible Development. The height, density, traffic and parking will be scrutinized.
Both groups promote responsible development.
“We want to see the whole picture of that site, that’s how they would get everyone to buy into it,” de Haseth said.
If the developers seek incentives in addition to the CRA’s half-acre, she said, “Citizens will want to know: What is the give-back to the city? What are we getting?”