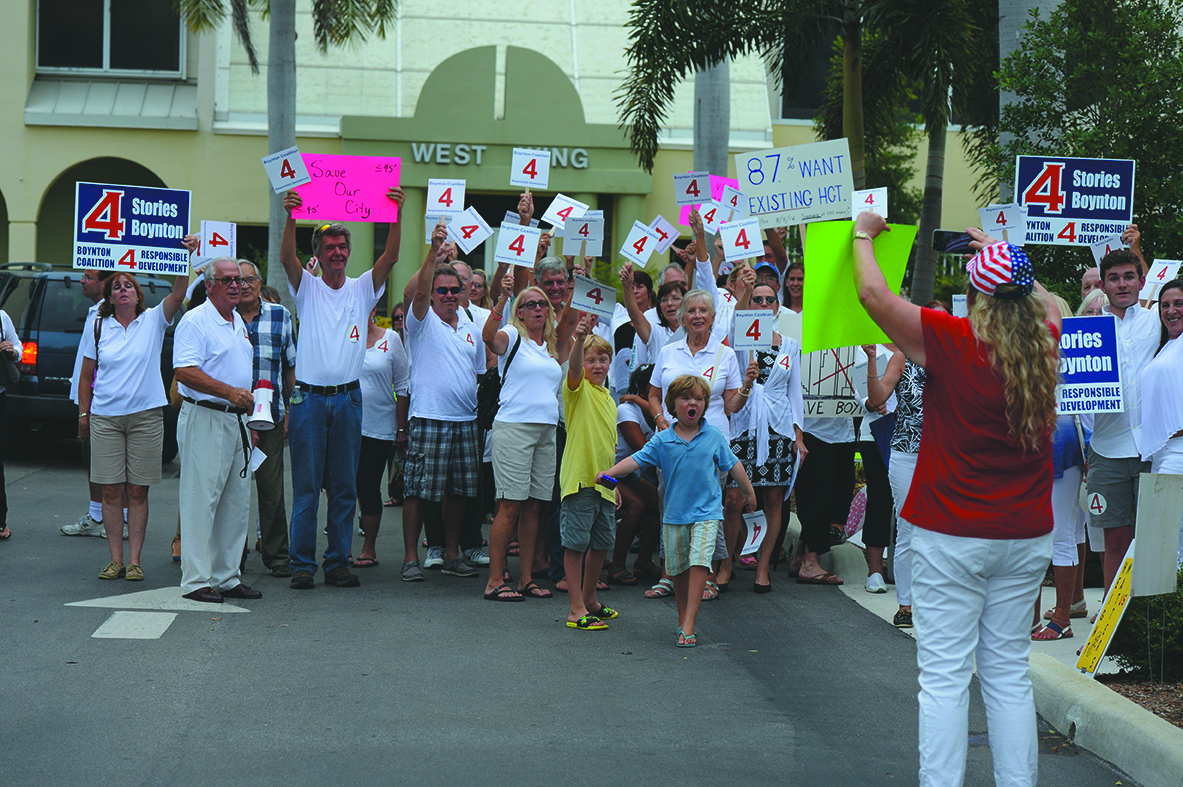 Dozens protest before the Boynton CRA meeting in opposition to the height of a project proposed for the southeast corner of Woolbright Road and Federal Highway.  Jerry Lower/The Coastal Star

More than 50 residents protested outside City Hall carrying signs that read: “Save Boynton, Stop High Rises” and “Better Not Bigger” before a meeting when building height would be discussed.
About 100 residents wore white shirts with stickers bearing the numeral 4 in red, indicating their four-story preference. They packed the Boynton Beach Commission Chambers, forcing others to stand along the sides and the back of the room.
The City Commission, sitting as the Community Redevelopment Agency board, reviewed the agency’s consolidated plans on Aug. 9.

The plans detail nine changes throughout the eastern half of the city, with the height and density increase at Woolbright Road and Federal Highway the most contentious. The changes will shape the city’s eastern half for the next 20 years.
The final vote on raising the height at the intersection to allow for 10 stories was 3-2 in favor. The vote to approve the consolidated plans was unanimous.
The plans still must be approved by the same five CRA board members sitting as the City Commission Sept. 8 and 20.
Twenty-five people spoke against increasing the height to 10 stories at Woolbright and Federal. Six people were for it, including three consultants hired by Isram Realty, which owns Riverwalk Plaza at the intersection’s southeast corner.
Isram submitted plans last year that call for demolishing the plaza and replacing it with a 10-story apartment building. The original proposed zoning and land-use plan allowed seven stories. The changes discussed Aug. 9 allowed 10 stories. A separate meeting will be held to review Riverwalk’s plans.
The developer sounds like “a bully,” resident Maureen Trufano said at the CRA meeting. She said she ran a preschool where respecting others was an important rule the children learned. She said Shaul Rikman, Isram’s owner, stood up and said he needs 10 stories to make a profit when he knew only seven stories would be allowed. “He is flaunting the rules,” she said.
Mayor Steven Grant and Commissioner Christina Romelus were on the losing side of the vote regarding the Woolbright and Federal Highway intersection.
Romelus, whose district includes Riverwalk, said she had to support her residents, even if they did not vote for her in the March election. She said her vote that night “doesn’t demean staff. It’s just not the right plan.”
Grant wanted an impartial review of the plan by the not-for-profit Treasure Coast Regional Planning Council, which provides planning and growth management services for communities in the region. Otherwise, it would look as if the city is just changing the zoning for Isram. No board member supported him.
Rikman shouted at Grant over the gist of their first meeting. Romelus asked for a short break. When the CRA meeting restarted, police officers moved from the back of the chambers to the front to maintain order.
Former CRA board member James “Buck” Buchanan urged the CRA board members to think destination and promote “the Floribbean/fishing village concept that was adopted years ago.” Buchanan was ousted during a reorganization of the board last fall after disagreeing with a city commissioner at a CRA meeting.
During the CRA meeting, two residents presented survey results in support of lower height guidelines in the CRA district. Fourth-generation Floridian Susan Oyer used the Survey Monkey program. It was online for seven days and received 545 responses. The survey had six questions that the CRA should have asked in June, she said.
The middle-school history teacher said she reached more than 7,000 residents. The overwhelming response was for lower heights, she said.
“We pay taxes here, we live here, we care about this area,” Oyer told the CRA board members. “You are supposed to represent the residents, not the developers who are here today and gone tomorrow.”
Commissioner Joe Casello questioned whether anyone could vote twice in the survey. Grant said the program allows only one vote per household, recognized by the computer’s internet protocol address.
Resident Debbie Lytle, who lives west of the interstate in Commissioner Justin Katz’s district, also had an online petition. “Regardless of where you live, [the plan] affects the whole city,” she said.
Lytle held a stack of 726 signatures for her petition that asked people to sign if they favored the lower height at the Woolbright intersection.
She planned to keep the survey online until Sept. 8 in an effort to collect 1,000 signatures.
“We like that you want to set the standards high, but don’t set the buildings high, too,” she said.
Katz voted for the height increase, saying most of his constituents are newer residents. They moved to Boynton Beach in the past 10 to 15 years and “don’t mind the height increases,” he said.
After the vote, former Mayor Jerry Taylor deviated from his usual path to leave the chambers. Instead of using the side aisle, he climbed the center stairs and gave Rikman a thumbs-up sign. Rikman’s company had donated $2,000 to Taylor’s re-election campaign last year.