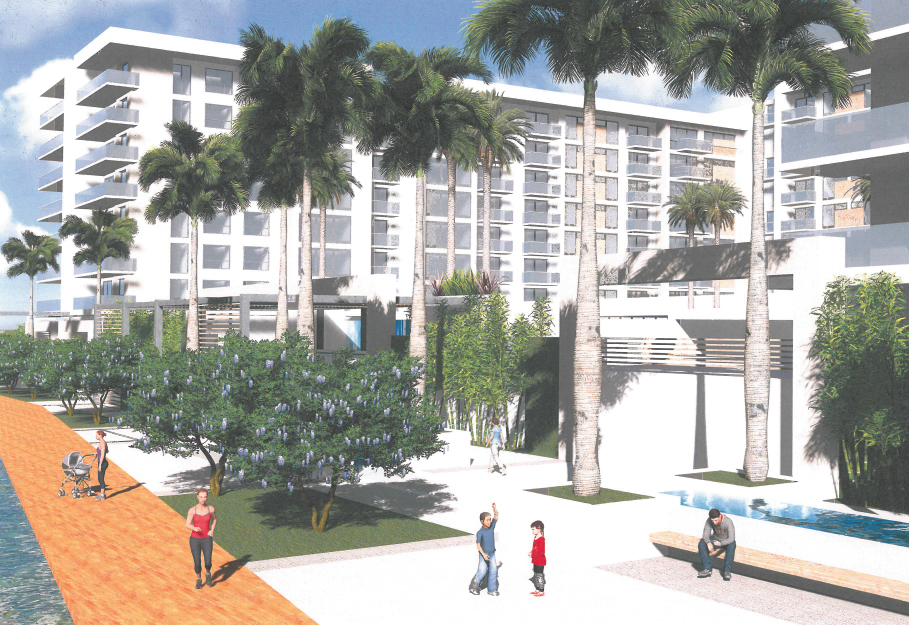 Riverwalk developers say they need 10 stories for the project to “break even.”

Boynton Beach’s Community Redevelopment Agency advisory board squeezed in an interim meeting in late July and reviewed two-thirds of the changes proposed by the city-CRA’s consolidated plans.
The most controversial — the height change from 75 to 100 feet at Woolbright Road and South Federal Highway — was approved after passionate pleas by residents and community leaders against it. Advisory board members approved six changes, five unanimously. They will review the remaining three changes in August.

The new consolidated plans cover the entire 1,650-acre CRA district and will determine the look of the city’s eastern half for the next 20 years. The plans feature complete streets with bike lanes, shade trees, enhanced lighting and widened sidewalks; clustering of taller buildings on Federal Highway; and would turn Ocean Avenue into a designated festival street.
The CRA advisory board had met previously in early July and adjourned after 11 p.m. without reviewing the entire set of plans. The board then held an interim meeting on July 21 when members reviewed six of the nine proposed changes in the consolidated plans.
Residents expressed concern about proposed planning nodes that allow extra height and density at key intersections along Federal Highway. The intersection of Woolbright and Federal was the first change discussed by the board.
At the southeast corner of that intersection, the owner of Riverwalk Plaza wants to raze the shopping center and build a 10-story apartment project. The maximum height allowed there at present is 45 feet, although the current guidelines would allow for seven stories based on the height of surrounding properties. Developers need only to propose a project in that location to get the seven-story height limit. The new consolidated plan would allow up to 100 feet in height.
CRA Executive Director Vivian Brooks referred to the plan’s height increase as a “little uptick to what was there.” The CRA wants the Woolbright and Federal Highway node to be considered a secondary development area, connecting to the downtown and with access to the interstate and the beach, she told the advisory board.
Fifteen people spoke at the advisory board meeting on that item, 10 were against the change. Five, including four associated with Riverwalk’s owner Isram Realty, were for it.
Isram attorney Michael Weiner read a section of state law governing CRAs, and repeated the word “redevelopment” in explaining the advisory board’s role.
Steven Wherry, Isram’s land-use attorney, pointed out that the compact living arrangement in apartments reduces costs of city services. The plaza now contributes $330,000 in taxes and the new project will contribute $1.4 million, he said. He did not explain how he arrived at the value of the apartment project.
Advisory board member Dr. James DeVoursney talked about the pairing of the district-wide plans and the Isram redevelopment project.

“That’s unfortunate. Citizens would look at this as spot zoning,” he said. “For the sake of transparency,” he prefers the 75-foot height limit and allowing the Riverwalk project to continue with its review through the city approval process.
He was the only advisory board member who felt that way. His six colleagues voted for the change in height.

Riverwalk owner insists
project cannot wait
Earlier in July, at a CRA board meeting, the Riverwalk property owner insisted board members decide soon.
“However, if this will be dragging on, I will withdraw my application. … We’ll keep it as a retail center,” said Shaul Rikman. His company owns the plaza where a Winn-Dixie grocery store left its space in January 2015. “We, I, will not wait any longer. You’re going to have to be big boys and make a decision.”
Rikman explained to the CRA board members why his company needs the extra height. “Financially we can’t make it at seven stories, we need 10 stories to break even,” he said. “They (city and CRA staff) said, ‘You know what, we’re working on creating nodes and hold off on it until such thing passes or not.’ ”
At that meeting, the city’s development director, Andrew Mack, said, “One of the reasons this is being expedited is because we are in a development cycle and there are projects before us. It’s not just for Riverwalk.”
The CRA advisory board was scheduled to discuss the remaining three changes on Aug. 4, when board members were expected to make recommendations about the entire plan.
The CRA board members will then meet Aug. 9 to review the advisory board recommendations and make their own to the City Commission, which meets Aug. 16. It’s an intertwined relationship with the CRA board members also sitting as city commissioners.
Although Riverwalk appears headed for the Aug. 23 Planning and Development Board agenda, Boynton Beach spokeswoman Eleanor Krusell said  there is no timeline for city approval.  “It’s on hold,” she said.