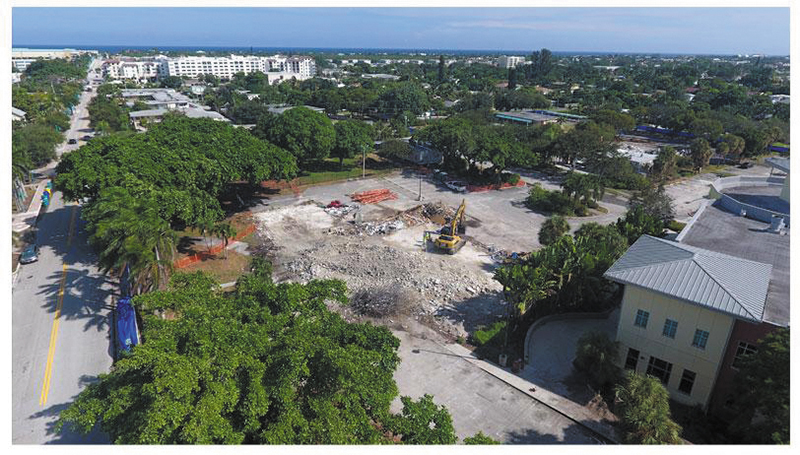 The Boynton Beach Civic Center, library and surrounding buildings were demolished in October. City Hall, police headquarters and other areas north of Ocean Avenue are scheduled to be torn down this month. Courtesy city of Boynton Beach

About a month into the Town Square project that will create a downtown for Boynton Beach, “everything is on track,” said Colin Groff, assistant city manager in charge of the project.
In October, the Civic Center, Art Center, City Library and Madsen Center buildings were demolished to make way for the 16-acre project. The area is under development by a public-private partnership among the city, its Community Redevelopment Agency and the development team of E2L Real Estate Solutions.
On the south side of Ocean Avenue, the new downtown will include a City Center that combines City Hall and the library, an amphitheater, a play area and a garage. The buildings should be finished in early 2020.
On the north side of Ocean Avenue, the existing City Hall, police headquarters and Fire Station 1 are slated to be torn down in November. The north side will have a district energy plant and a new Fire Station 1, along with a privately built hotel, retail space, offices, restaurants, apartments and a garage.
In past years, the city’s holiday tree lighting occurred in front of the Schoolhouse Children’s Museum, just east of City Hall. Because of the ongoing construction, that location is not suitable for the tree lighting ceremony because public parking is not available.
Instead, Boynton Beach Mayor Steven Grant suggested using the banyan tree in Dewey Park as the city’s “Christmas tree.” The park is three blocks east and out of the construction zone.
At the city’s October CRA meeting, board member Justin Katz joked, “It’s imperative that if an article is written about this that it says: Jewish mayor saves Christmas.”
The CRA board unanimously agreed to spend up to $25,000 to light up the banyan tree and the surrounding area after the city’s holiday parade on Dec. 1. The parade starts at 4 p.m. The banyan tree will be lit nightly through early January.
The CRA received three bids with costs ranging from $5,000 to $20,000 for the banyan tree lighting. Last year, the holiday tree lighting cost $36,000 to light up the artificial tree near the Children’s Museum.