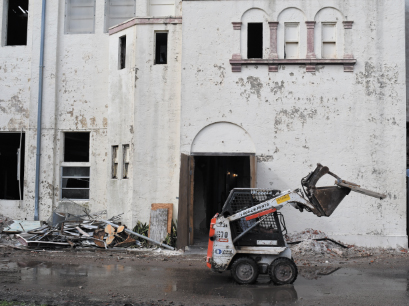 Workers have been removing the windows and doors from the old high school as they prepare to renovate the historic building.  Jerry Lower/The Coastal Star

Boynton Beach wants to zip into the 21st century by creating a bustling downtown with high-rise apartment buildings, shops, a high-tech library and a large LED screen outdoors to serve as a focal point for community gatherings.
The largest project planned, the 16.5-acre Town Square, will cost an estimated $250 million, Assistant City Manager Colin Groff said at a public meeting in early November. Town Square, whose construction is tentatively set to start next spring, sits between Boynton Beach Boulevard on the north and Southeast Second Avenue on the south.
“We want to give people a place to come together, Boynton Beach’s family room,” said Groff, who is in charge of the Town Square project.
The city picked E2L Real Estate Solutions as its partner earlier this year for Town Square. E2L consists of more than 10 real estate-related companies. The partnership will build a combined city hall/library and renovate the historic high school to house the city recreation and arts classes on the ground floor and events on the second floor.
The Schoolhouse Children’s Museum and high school will stay at their current locations on Ocean Avenue.
E2L partners also will build a new fire station just outside the project on the northeast corner of Northeast First Street and Northeast First Avenue. It will have space for a third bay, which can be used for another rescue vehicle as the city’s service population grows.
In early November, city commissioners gave a tentative OK to the plan. The police headquarters will be built on city-owned land on High Ridge Road, next to the fire-rescue headquarters. On Dec. 5, commissioners will review a guaranteed price for Town Square and decide whether to proceed.
The city’s share is now estimated at $133.8 million, up about $38.8 million since June. The extra costs can be explained, Groff said. The combined city hall/library is now planned for four stories. Instead of $14 million for a new city hall and renovated library, the combined structure will cost $26.98 million.
The change was made because the City Commission wanted to have more work-force housing in the project, he said.
The developers will build apartments at rental rates that start at $850 for a studio and rise to $1,200 for a two-bedroom, two-bath unit, Groff said.
Although at least one city commissioner wants units residents can purchase, “right now, the market wants to fund apartments,” he said. “If that changes, then the units could be converted into condos.”
The additional units translate into three more stories on the south parking garage to park the 450 extra vehicles. That change raised the garage cost by more than 71 percent to $14.2 million, according to city data.
Boynton Beach also added a district energy plant to supply power to all of the buildings in Town Square. That raised the project cost by at least $10.4 million, Groff said.
The city owns all of the land in Town Square. Boynton Beach plans to sell or lease the land it doesn’t need to its private partners to build a five-story hotel, apartment buildings and restaurants or shops in the project.
Former City Commissioner Mike Fitzpatrick suggested that the city do a long-term lease.  “Half or more of the land will go into private hands,” he said at the Nov. 1 meeting. He wants the city to do a 99-year land lease, similar to the one Boca Raton did when it created Mizner Park.
Work on the old high school started in August with $2.1 million from the city’s Community Redevelopment Agency. The city will contribute another $2 million to the total renovation cost of $10.5 million.