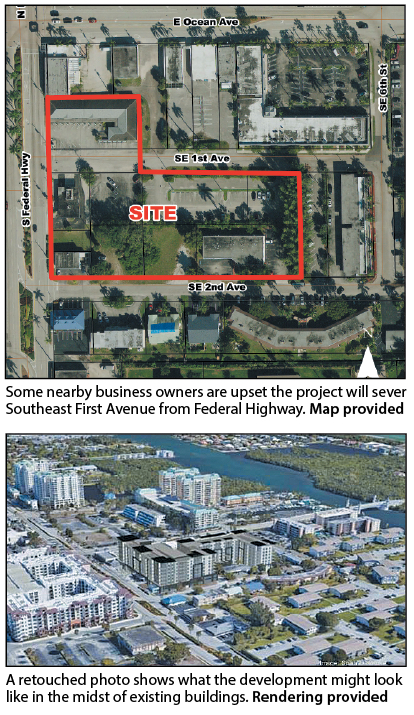 An eight-story residential and retail project has won a green light from city commissioners, despite a planning board’s earlier rejection and objections from some neighbors that it will sever part of a downtown street and worsen congestion.
With 5-0 votes Jan. 19, Boynton Beach’s commission set the stage for developers to proceed with Legacy at Boynton Beach. The plan includes 274 apartments, 12,422 square feet of retail space on the ground floor and 530 parking spaces, mostly in an enclosed garage.
It marks the latest step in a redevelopment surge downtown.
The 2.76-acre site at the northeast corner of Southeast Second Avenue and Federal Highway encompasses parcels of land obtained by an affiliate of Beachwood, Ohio-based Goldberg Cos. Inc.
One source of friction in public meetings since last fall has been that the plan permanently would close a portion of Southeast First Avenue, ending its connection to Federal Highway.
Property owners near the project, including Tony Mauro, told commissioners in a Jan. 6 meeting the closure would be a “calamity” that crimps access to neighboring businesses. Periodic traffic backups and flooding on East Ocean Avenue would make the loss of alternatives worse, while also limiting access by ambulances or other emergency vehicles, he argued.
“It’s irresponsible,” Mauro said.
Mayor Steven Grant said alternate routes are available that he has driven himself, and he dismissed the inconvenience as “negligible.”
The partial closure “was something we were asked to do,” said developer representative Bonnie Miskel.
Consulting with traffic agencies, city staff members said that for reasons of safety and traffic flow they favored closure of an outlet that puts turning vehicles close to the busy intersection of Federal Highway and Ocean Avenue.
Developers have pledged to enhance sidewalks along the remaining portion of Southeast First Avenue and improve areas where trucks can unload to support businesses.
Other owners of properties in the area voiced support for the partial road closure, saying the span was often used for parking in a way that hindered traffic moving through.
At the Jan. 19 meeting, attorney Jason Evans, representing property owners concerned about the plan, renewed what he called “vehement” objections as his clients consider options for legal challenges. He said he requested but never received traffic studies to back up the claims of developers and city staff.
“This is a taking,” Evans said. “This is something that’s not going to be taken lightly.”
Miskel disputed that, saying developers had consulted with multiple experts and met all regulatory burdens.
Grant maintained the net effect would be good for all involved.
“I believe the adjacent property owners will receive higher property values because of this development and improvements in the area,” the mayor said.
The city’s planning and development board voted 4-3 against one component of the plan in September, and 6-1 against two other pieces. Among the concerns expressed was a “rushed” timetable while many seasonal residents were not present to weigh in on traffic and density issues.
At the same time, board members acknowledged the City Commission has final say.
The project will feature a modern coastal architectural style, according to city staff reports.
“The project’s materials include simulated weathered wood planks, clear glass at the retail level, black window frames, vertically oriented windows and subtle tan tones that create a warmth to the building while maintaining clean lines,” staffers wrote.
At least 20 smaller apartments are planned to be “attainable,” Miskel said Jan. 6, meaning affordable to workers with limited incomes under rules that allow developers to put more residential units than usual in the same space. Further details of those plans were expected to be discussed at future meetings.