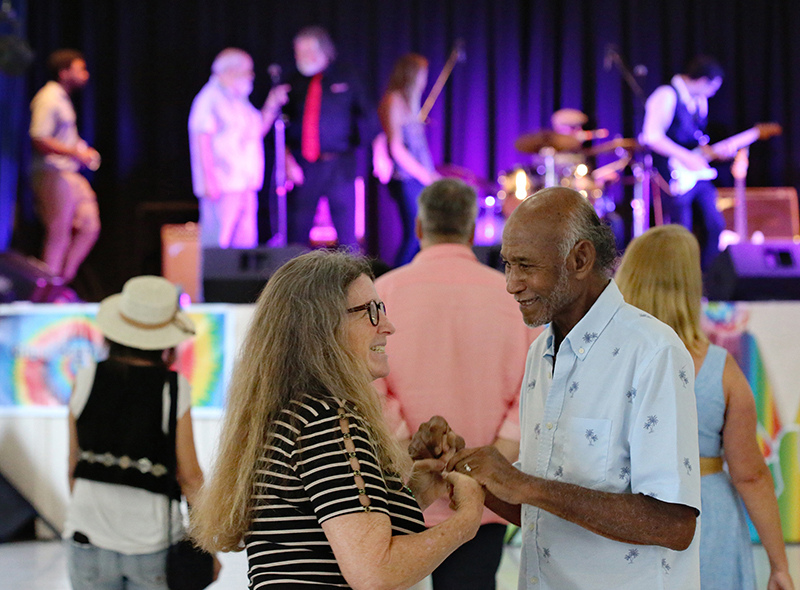 Walls go up, and walls come down, and in between lives are lived.
On Tuesday, Sept. 4, 1962, Mayor Thomas A. Summers turned a shovelful of dirt at the corner of East Ocean Avenue and Seacrest Boulevard, and a new, $100,000 Boynton Beach Civic Center was born.
The walls stood strong through 56 years of teen dances and rummage sales, pingpong and pool, Jazzercise and hurricanes, but now they’re about to come down.
On Sept. 3, the city will hand the Civic Center keys to developers, and those old walls will make way for Town Square, a $118 million, 16-acre redevelopment.
And so, for six hours on Saturday afternoon, June 16, some men and women who were young when the center was young gathered there to mourn, remember, dance a last dance — and write on the walls.

DONNIE & JEANNIE, ’69
Inside a heart, of course.
Regina Day, 66, was born in Delray Beach, and Don Day, 67, moved there when he was 6. They met at the old Seacrest High School.
“We’d come up from Delray,” Don Day said, as a trio called Three’s Company burned through Great Balls of Fire onstage.
“This was the main dance hangout,” he remembered. “The idea was to pick up the girls in the parking lot so you didn’t have to pay to come in and then take them to the Royal Castle in front of St. Mark’s School on U.S. 1.”
One night, he got in a fender bender on Ocean Avenue. “Took the gray primer off my old Ford Falcon,” he said. “I finally painted it white.”
But his future wife, Regina — known to all as Jeannie — could not be lured to Royal Castle.
“I was the good girl who came in with my cousin and danced,” Jeannie Day said. “We were real dancing machines back then. That’s why last year I had to get new knees.” 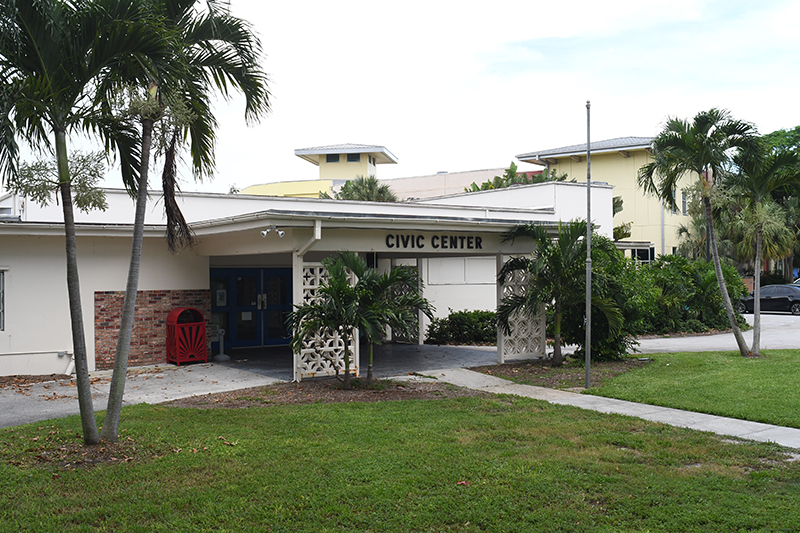 The Civic Center and the library (in background) will both be demolished to make way for the Town Square redevelopment.

Cathy Patterson, 67, was one of the organizers who decided the city should host a Last Dance at the Civic Center “so all the kids who used to hang out here could say goodbye.” She also suggested it be from noon to 6 p.m., even though those Saturday dances of the 1960s were at night.
“Nowadays, we all have to get to the early bird at the LongHorn,” she laughed.
Cathy thinks the dances cost 25 cents when she was a girl, but her husband, Jim, says 50 cents, and he should know. Jim Patterson, 72, was the city’s recreation supervisor back then and held the job for 30 years.
“It was 50 cents for Boynton Beach Youth Association members and a dollar for others,” he said.
Memories fade, but both agree they met within these walls.
“He was running the dances,” Cathy said. “I was 16 and he was 21, the adult in the room.”
You could tell Jim Patterson was the adult in the room because he wore a coat and tie.
“We didn’t have that many problems,” he recalled. “I had to watch out for a little bit of drinking, and check the bathroom for smoking. A few kids would get drunk.”
On a good night, he said, the teen dance might draw as many as 300, 400 kids.
“But we averaged about 150. We paid $70 or $80 for a band, $90 if they were real good. The big local band was The Avengers.”
Propped on an easel near the door beside a table full of Civic Center scrapbooks, a blown-up, black-and-white photograph from the old Boynton Beach News Journal has captured the five Avengers with their Beatles hair and bellbottoms in February 1969.
The Avengers’ bass player was an 18-year-old boy named Dana Carrier.
Onstage at the last dance, facing that photo from the stage, the bass player for Three’s Company was a 67-year-old man named Dana Carrier.

In a heart, of course.
Lynn Shephard and Dana Carrier met here, too, and married.
“I tried to get the original band back together for this,” he said, “but they’re all over the United States. One’s in California and one in Tennessee, one in South Georgia. I gave them four months’ notice, but …” He shrugged. 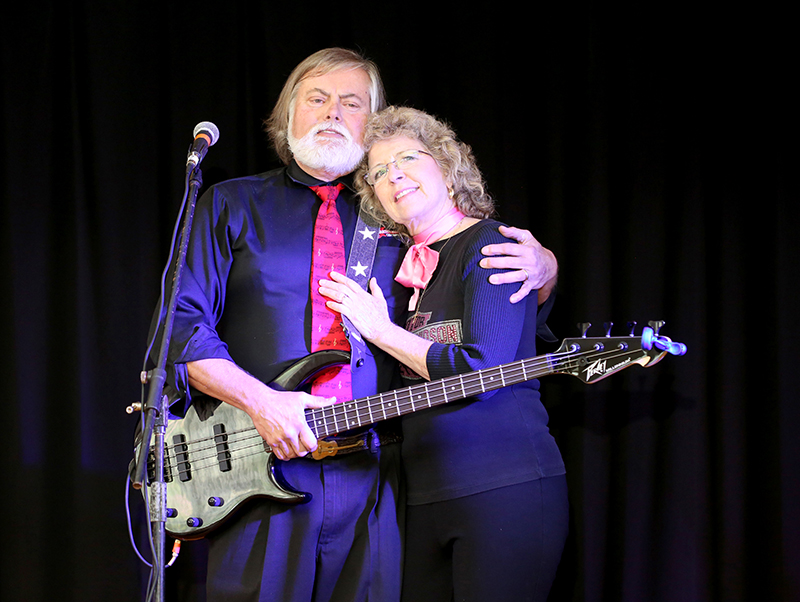 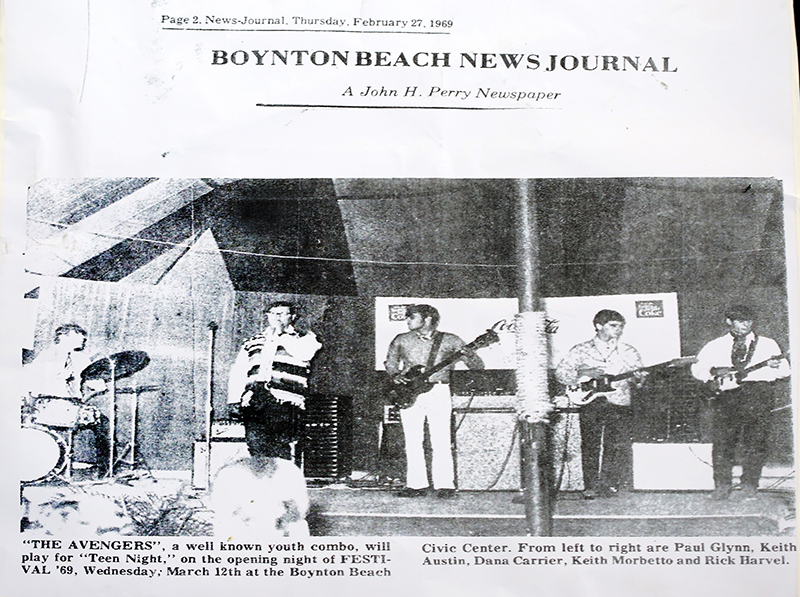 Carrier had auditioned for The Avengers to replace a departing guitarist, he recalled. The other guys told him he wasn’t good enough to play guitar, but if he wanted to be a bass player, they’d get him a bass and teach him. Garage bands were loose like that back then.
“We used to rehearse in a tin barn down where Bud’s Chicken is now,” he said.
They played the tunes most of today’s teenagers have never heard of, and they will never forget.
“We played a lot of Vanilla Fudge,” he said. “Young Rascals. Good Lovin’ was my big song, and we had a singer who had a voice like Gary Puckett, so we could do Young Girl.”
Meanwhile, Noel Cyr, 67, and his brother Duane, 65, stood against the wall, reminiscing about The Tree.
Something in Noel’s grin, and the way he spoke those two words, let you know The Tree should always be capitalized.
“This was the place to come and meet girls,” he explained, “and The Tree was this big banyan tree out in back. You’d go out there to kiss.”
They pushed through the side door, stepped out into the library parking lot and pointed.
“That’s it, right there,” Noel Cyr said, and sure enough, straight across the lot, beside Southeast First Avenue, a majestic banyan tree still stands with branches low enough to hide a multitude of teenage temptations.
“There’s probably a couple girls here today that I took out to The Tree,” Noel said.
The library wasn’t here back then, it was dark, and there were other trees around, so The Tree was really several trees.
“If you could get the girl outside, any tree was a good tree,” Duane Cyr said.
But of course the good girls wouldn’t venture back here, surely.
“Well,” he drawled, “they were good girls when they came out here, but they might not have been good girls when they went back.”
The Tree has survived, but youth doesn’t, and the teen dances didn’t, either.
“What killed the teen dances was psychedelic music,” Jim Patterson said. “I tried to keep it going. I bought six black lights, but the kids weren’t dancing to that sort of music.”
By the 1970s, he was patrolling preteen dances instead.
“We played bubble-gum music, but we didn’t have a band,” he said. “It was just records.”
And then came Jazzercise classes.

GONNA MISS THIS PLACE 197????
Monica Roundtree Cleckley, 44, a Boynton native, led her daughters, Maliha, 9, and Kirinyaga, 15, around the hall while she made a smartphone video.
“I went to dances here, and I brought my daughters for ballet and tap classes. It was a hub for things to do on a low-key street. Everybody in the community coming together.”
On Aug. 13-26, the Civic Center will be reopened to accommodate early primary voting, but this last dance would be the last real event.
Teenagers become Medicare recipients, band members move away, memories fade, time flies and walls fall.
The teen dances of the 1960s could draw 400 on a good night, but the Last Dance at the Civic Center never saw more than 60 or 70 that Saturday afternoon.
By 5:55 p.m. when the real last dance came due, there weren’t more than 25 or 30 old-timers lingering. The others had already left, for that early bird at LongHorn, perhaps, or a nap.
In the end, a young group called Bright Colors played a song called Good Times, recorded in 1979 by the rhythm and blues band Chic. Dana Carrier sang along, but only a few people danced. 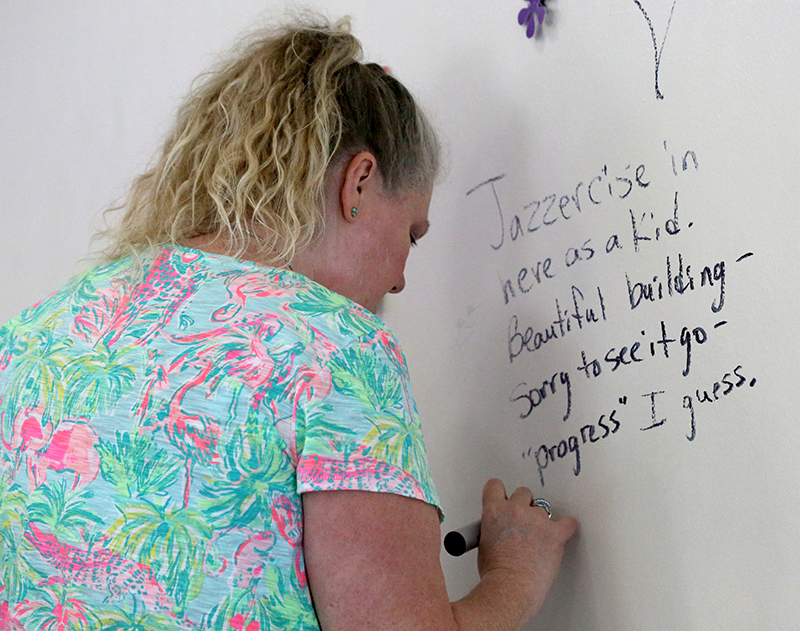 GREAT EXAMPLE OF 1960S ARCHITECTURE. WELL LOVED. GOODBYE AND GOD BLESS. SUSAN OYER.
Oyer, whose great-great-grandfather arrived in Southeast Florida in the early 1870s, stepped back to read what she’d written on the wall.
“Jazzercise in here as a kid,” she said. “Beautiful building — sorry to see it go — ‘progress’ I guess.
“How many buildings can you fight for?”