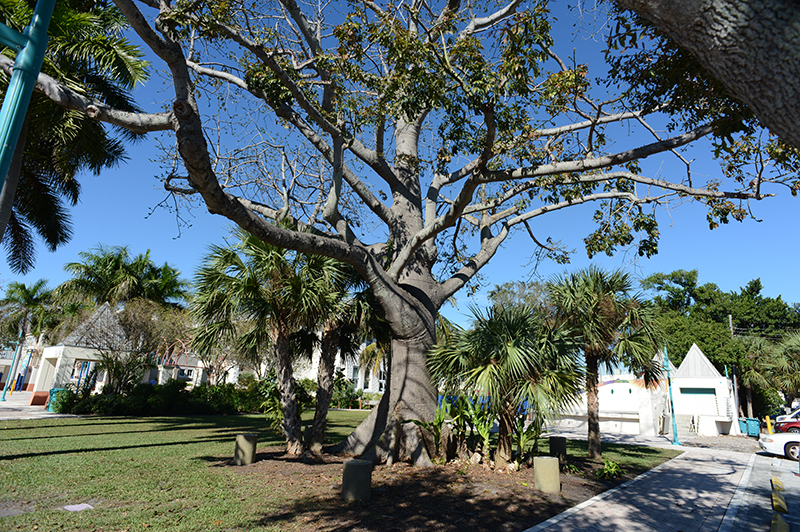 The kapok tree to be moved sits just east of the Schoolhouse Children’s Museum on Ocean Avenue. It will be sold or wind up on other city-owned land. Jerry Lower/The Coastal Star

Boynton Beach will save the kapok tree on Ocean Avenue property that it sold to the Town Square development team.
“We always planned to save that tree,” said Colin Groff, assistant city manager in charge of Town Square.
To prepare for moving, the roots of the 80-year-old kapok tree were pruned and its canopy was trimmed in mid-February, Groff said. Green Integrity’s Inc. of Deerfield Beach will move the tree.
If a buyer can’t be found in the next 60 to 90 days, then Boynton Beach will have the kapok tree moved across Ocean Avenue to city-owned property, Groff said. “The cost will not exceed $35,000 and that cost will be offset because new trees will not be required in that area,” he said. The estimated moving cost for a buyer will depend on how far the buyer wants to move the tree.
A taller kapok tree, just west of the historic high school on Ocean Avenue, will remain as part of the Town Square project, a private-public partnership between E2L Real Estate Solutions and Boynton Beach.
The 16-acre Town Square will create a downtown for Boynton Beach. The development will feature a combination City Hall and public library building, new fire station, a renovated historic high school that will have arts and rec classes on the first floor and banquets on the second floor, amphitheater, playground, downtown energy plant and parking garage.
The development team plans to construct apartment buildings, a hotel, retail and restaurant space, and parking garages on land it bought from the city.
The private kapok tree sits just east of the Schoolhouse Children’s Museum on Ocean Avenue. Not a Florida native, the kapok tree has withstood hurricanes while providing shade and shelter to those who gathered below it.
“As an historian, I support saving this vestige from the past,” said Janet DeVries Naughton, archivist and webmaster for the Boynton Beach Historical Society.
“Obviously, it’s not the same as having the tree in its time-honored and familiar place, and that saddens me.”
Even so, she recognizes that life involves change.
“The tree and her magnificence have been documented and frozen in time through photographs,” DeVries said. “That’s why it’s important to chronicle history. … What came before fades away, unless we share it through written, oral or visual preservation.”