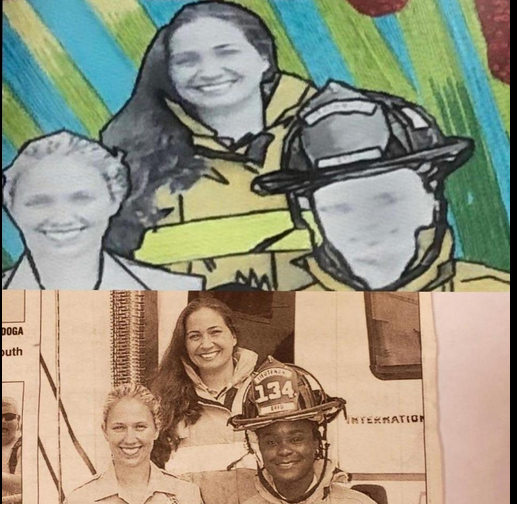 Photographs of firefighters were used as the base for a mural named 'Community Heartbeat' by Boca Raton artist Lynn Doyal. In the mural sample above it can be seen how the face of Deputy Fire Chief Latosha Clemons was obscured. In a different panel (below), images of both Clemons and former Fire Chief Glenn Joseph were removed and replaced with images of white people. Image provided.

Latosha Clemons, a Boynton Beach native, will receive $100,000 to settle discrimination claims against the city after her face was whitewashed from a mural honoring the history of the city's fire department.

“We will not be erased,” said Commissioner Christina Romelus, who is Black, when voting for the two settlements on Oct. 19.

A retired deputy fire chief, Clemons, will receive $80,000 to settle her lawsuit, filed in April, and $20,000 to settle a federal Equal Employment Opportunity Commission discrimination complaint against Boynton Beach.

“No amount of money can make up for what was done,” Romelus said.

Clemons face was restored after all the people in the mural were contacted about having their likeness displayed in the windows of the new fire station.

Clemons was not the only Black fire leader whose face was whitewashed in the mural.

Ex-Fire Chief Glenn Joseph’s face also was altered. As the city’s second Black fire chief, he declined to have his face restored, saying he had only been with the Boynton Beach Fire Rescue Department a few years.

Clemons, though, served the city for nearly 24 years before retiring in 2020. She grew up near where the new fire station opened in June 2020. She wanted her face restored in the mural to be a role model for young Black girls.

The public arts manager at the time was let go three days after the altered mural was discovered. The fire chief at the time was demoted initially, then decided to leave that position.