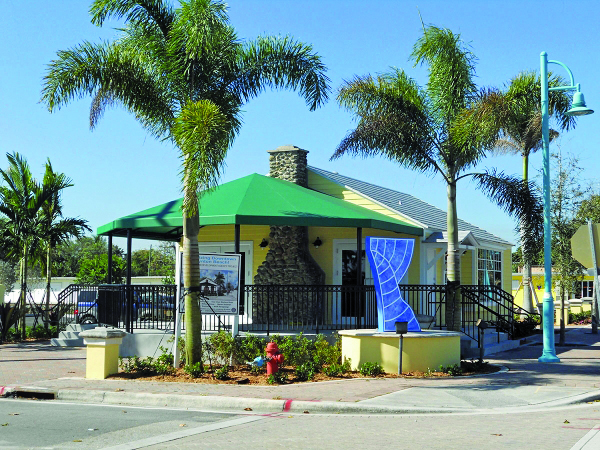 The Little House may reopen as a tapas restaurant.

Ocean Ridge Commissioner Richard Lucibella wants to buy the Little House in Boynton Beach and turn it into a tapas eatery.
He and a partner, Barbara Ceuleers, put $335,000 into an escrow account for the historic home and plan to rent it to Lisa Mercado, whom he has known for 30 years. Mercado owns The Living Room restaurant on Congress Avenue in Boynton Beach.
“It’s not so much a business investment as it is a community investment,” he said.
In the backup material provided to the city Community Redevelopment Agency, which owns the historic home also called the Ruth Jones Cottage, he wrote a letter to the CRA. He explained his interest as, “a clear understanding of the importance of this property to serve as a ‘seed’ anchor in rejuvenating this area of Ocean Avenue and a demonstrated respect for the value of our historic buildings.”
In short, they want to participate in the revitalization of Ocean Avenue, “not just for the neighborhood, but as a Palm Beach destination location,” according to the backup material.
The CRA has been burned before by two restaurateurs on that property: one who couldn’t make a go of a restaurant at that location, and the other who was undercapitalized but had a persuasive personality.
That’s why the CRA insisted on verifiable financial information this time.
But Lucibella and Ceuleers didn’t want “to reveal details of our personal wealth in a venue that becomes public information.”
Instead they paid in cash and provided contacts and phone numbers for SunTrust Bank’s Private Wealth Management Group to ensure both had enough money to cover the purchase price and the cost of operating a small business.
Lucibella hired Russ Bornstein, senior vice president of CBRE, to represent him before the CRA on Aug. 11. Mercado also was there to explain her restaurant concept for the Little House. She would use the Living Room as a commissary with most of the prep work taking place there for the finger foods she would serve at the Little House. She also would serve wine and beer.
In addition, she would feature a nightly special that would be prepared at the Living Room and heated at the Little House.
Lucibella has supported Mercado in the past by lending money to secure a liquor license for the Red Lion Restaurant in Boynton Beach and with a small loan when she was starting the Living Room. He said both loans were repaid.
Bruce Kaplan of Local Development Co. wanted both the Little House, at 480 Ocean Ave., and the Oscar Magnuson House, at 211 Ocean Ave.
But the CRA board didn’t want to sell both to the same developer as it had agreed to do earlier this year. The board members offered him the Oscar Magnuson House for $255,000, its appraised value, plus another $200,000 grant for build-out.
The house would have to be rezoned into a commercial use property. Tom Carney, former Delray Beach mayor and Delray Beach CRA member, represented Kaplan to the board. Carney called Kaplan’s failure to return in April “a confusion. … But he was committed to this and we’re back.”
Kaplan also apologized to the CRA board members for the “missed communication. I didn’t realize we were still in the running. I thought that the contract had been awarded to someone else.”
He plans to turn the home into an upscale Italian restaurant. Kaplan’s company made a 10 percent deposit on the house.
The CRA rehired Tom Prakas in July as its restaurant broker for these two properties. He will receive 5 percent of the purchase price.
Both properties have a 10-year reverter agreement that says in the first 10 years, if the house doesn’t become a restaurant or turns into an unapproved CRA use, that the CRA has the first option to buy the house at market value.