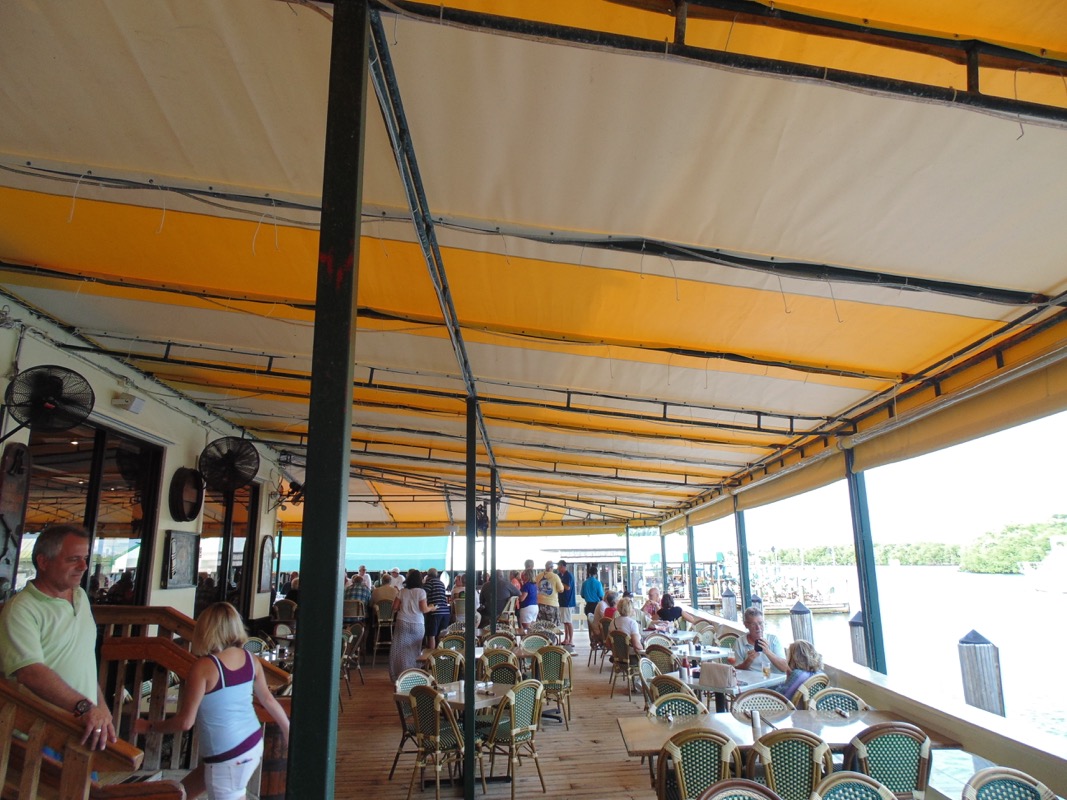 Banana Boat co-owner Luke Therien, left, inspects the massive 3,000- square-foot awning his crew took down before the storm and put back up the morning after. Steven J. Smith/The Coastal Star

BOYNTON BEACH — Local business owners breathed a collective sigh of relief in the wake of Hurricane Matthew’s too-close-for-comfort visit to the area.

Cindy Shi, manager of a massage salon in Ocean Plaza at 640 E. Ocean Ave., was taking down the plywood that protected her windows on Friday, the day after the storm passed. She said her business suffered no damage.

“I was closed [Thursday] and [Friday], and I will open up for business [Saturday],” Shi said. “All of my clients knew the hurricane was coming, so they rescheduled their appointments for the weekend after.”

Most of Shi’s neighbors in Ocean Plaza remained boarded up except for Café Frankie’s Restaurant, which was open for business Friday and looking to lure locals who were slowly emerging from their homes after the storm, said owner Anthony Calicchio.

“We boarded up the windows and I was expecting to go through a few days without electricity,” Calicchio said. “I was also planning on selling pizzas to everyone while they had no electricity. We did a lot of preparation for that, but no one lost electricity, so no one ordered pizzas and I lost some money there.”

Calicchio added business was “still a little slow” while area residents busied themselves taking down their storm shutters.

“We’ll be back to normal soon,” he said.

Eddie Olsen, captain and mate of the Sea Mist III, a charter fishing boat docked at 700 Casa Loma Blvd. in Boynton Beach, said he left nothing to chance in getting ready for Matthew.

“We definitely prepared properly,” Olsen said. “We tied the boat up as well as we could and hoped for the best. Our prayers were answered. Everything worked out great.”

Olsen added some storm surge came in over the sea wall and flooded the adjoining parking lot for a while, but there was no damage to report.

“We dodged a bullet,” he said.

Luke Therien, co-owner with his brother, Gilles, of Banana Boat Restaurant at 739 E. Ocean Ave., said bitter experience taught them to take down the enormous 3,000-square-foot awning that covers their outside bar and restaurant area.

“Our family has owned this restaurant for 38 years and we’ve been through every hurricane since 1978 — Andrew, Jeanne, Frances, and Wilma,” Therien said. “That awning crashed down on us during Wilma in 2005 and we had to have the whole thing replaced. We even installed some support posts afterward. It’s like a circus tent. We didn’t want to make the same mistake twice, so when we heard about Matthew’s 130-140 mph winds, we decided we had to take this thing down. It took about 15 guys to take it down before the hurricane and another 15 guys to put it back up again the day after.”

Therien added the restaurant sustained no damage except for a palm frond that fell in the parking lot.

“We’re very thankful for that,” he said. “We’ve got a nice crowd here right now and we’re expecting more later. We’re a lot luckier than a lot of people to the north.”