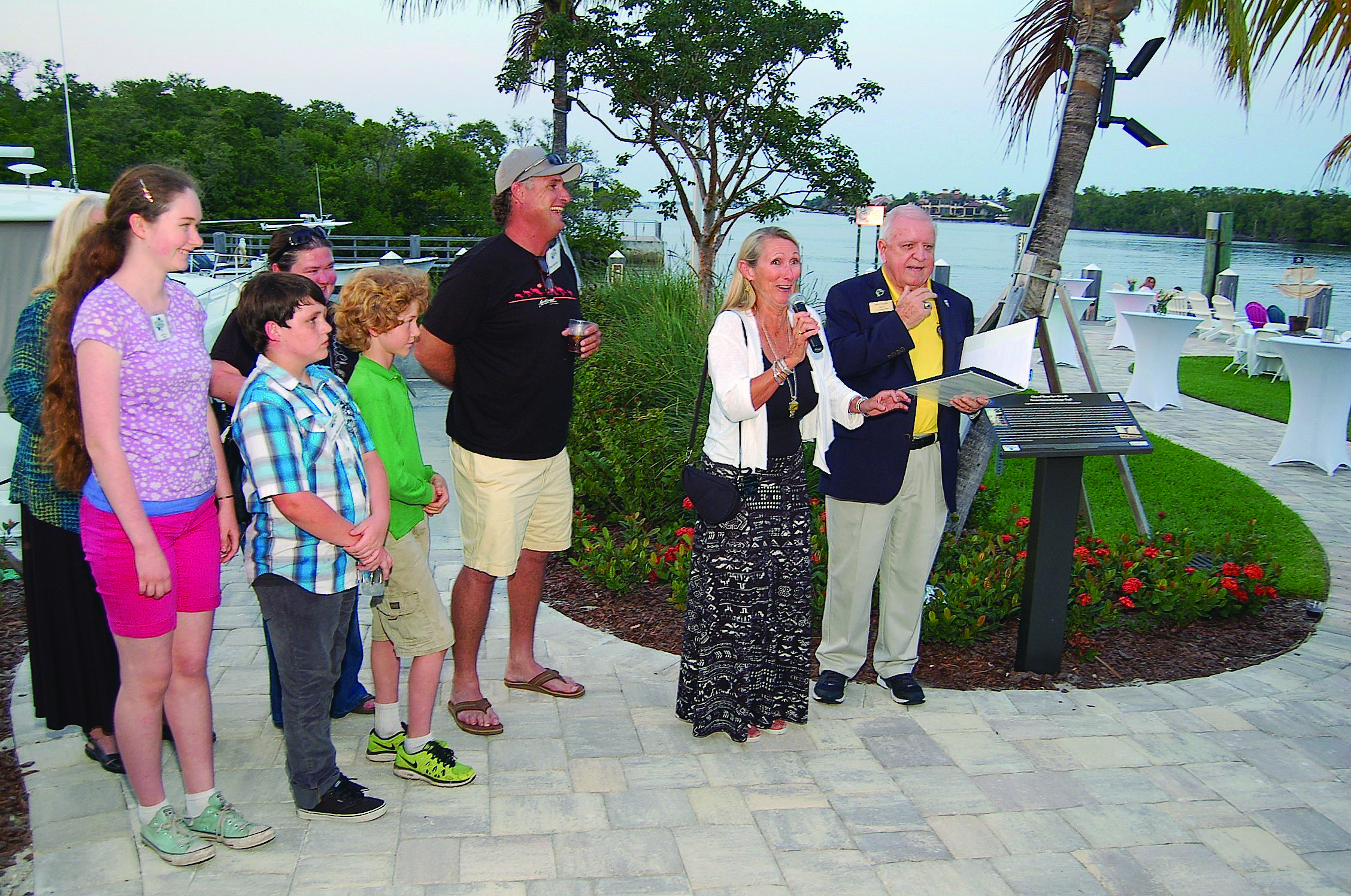 a boat captain and co-founder of the Sea Mist fishing company, during a March 18 ceremony.

Standing with Taylor are Hall’s daughter, Judi Garnsey Andrews, Capt. Burt Garnsey and other members of the Garnsey family. 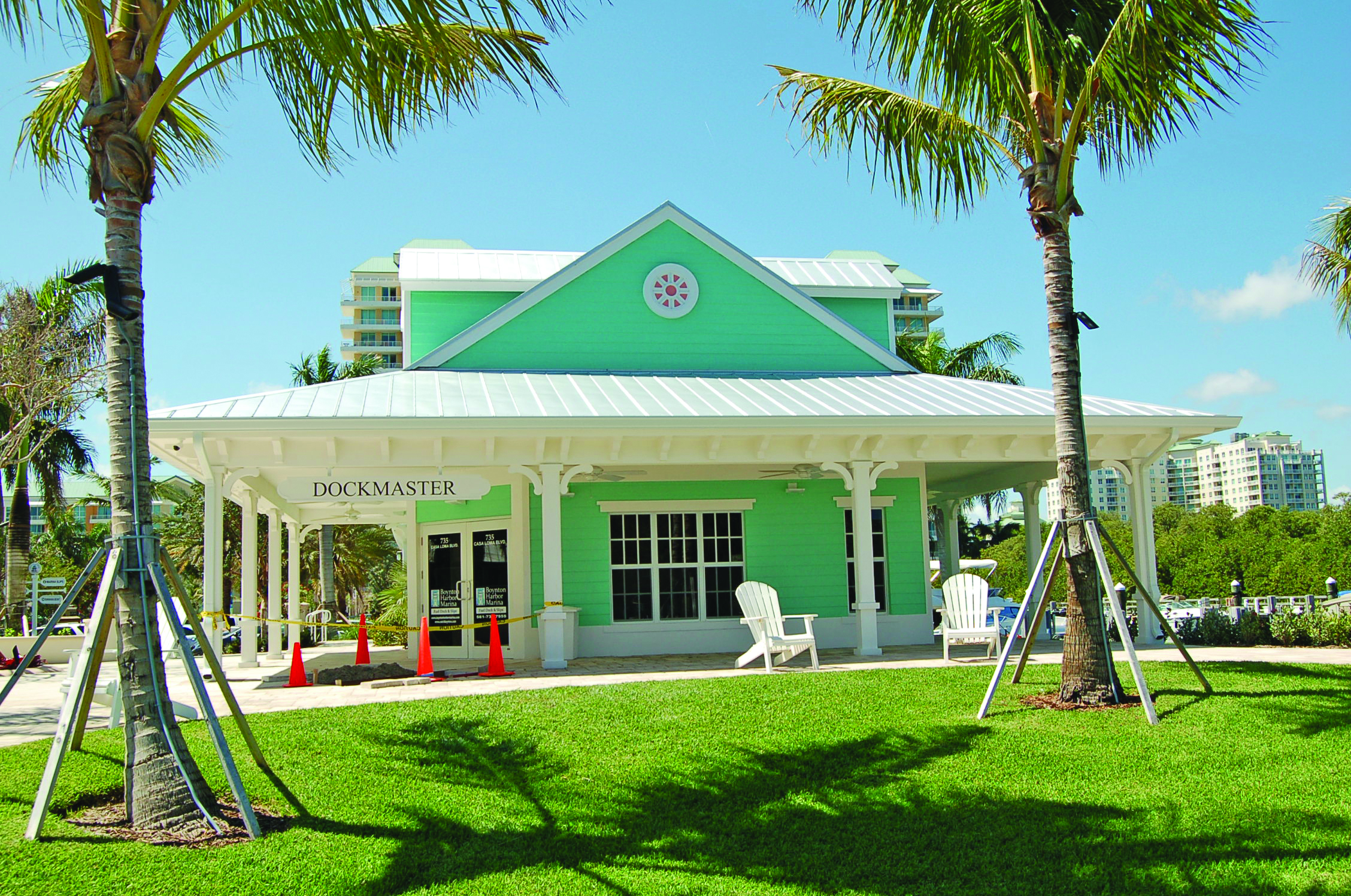 The view from the fuel docks at Boynton Harbor Marina shows the new harbormaster building,

which includes restrooms, a ship’s store and a dockmaster’s office.

Boynton Beach city officials joined County Commissioner Steven Abrams and invited guests on March 18 to dedicate the Harbormaster building — an island-style building that houses the dockmaster’s office, a ship’s store and public restrooms at Boynton Harbor Marina.
The $1.6 million building, completed in December, marks another phase in the renovation of the marina, which was purchased by the city’s Community Redevelopment Agency in 2006.
“The boaters love it,” Dockmaster Brian Smith said. “Business is starting to pick up now that they know we’re here.”
With about 1,500 square feet of space, the sea-foam-colored Harbormaster building with white trim and a metal roof is surrounded by paver bricks and new landscaping. It stands in stark contrast to what used to occupy the property beside the fuel docks: a metal shipping container that served as a shelter for the dockmaster.
New fuel pumps, to be installed later this spring, will complete the renovation and allow the city marina to supply fuel to larger boats, Smith said.
“It’s first-class,” Capt. Bill McKissock of the Dolphin Sun dive boat said of the new building. “My customers are asking me to pick them up at the fuel docks.”
Vivian Brooks, executive director of the CRA, said the next phase of marina redevelopment will create open space and a landscaped promenade parallel to the marina’s boat slips.
Plans call for tearing down a two-story building near the Sea Mist III boat docks, but doing so will require permission of Palm Beach County commissioners because the county gave the CRA $2 million from a waterfront bond issue with the stipulation that renovations would not “materially alter” the marina.
Also on March 18, the CRA dedicated a commemorative Downtown Heritage Trail plaque (located on the east side of the Harbormaster building) to the memory of Janet Hall, one of the first female boat captains in South Florida and co-founder of the Sea Mist drift fishing business that still operates at the marina.
Hall died Sept. 16 at her home in Ocean Ridge. She was 96.
The pioneering lady boat captain began her love affair with the ocean working as a “mermaid” for glass-bottom boat tour operators in Fort Lauderdale.
After diving one day, she decided she would rather operate the boat than dive below it. The Coast Guard issued her captain’s license in 1940, family members said.
Hall and her late husband, Wendall Hall, purchased what is now Boynton Harbor Marina in the 1950s and named it Sea Mist Marina.
“My mom had an unusual love of the ocean, and she wanted to do whatever she could to bring tourists to Florida,” her daughter, Judi Andrews, said during the dedication ceremony.
The commemorative plaque honoring the Halls is the 10th historical plaque on the city’s Downtown Heritage Trail.
Additional photographs and information about the Halls and their work on the water around Boynton Beach can be obtained by scanning the QR code on the right-hand side of the Heritage Trail plaque with a smartphone app