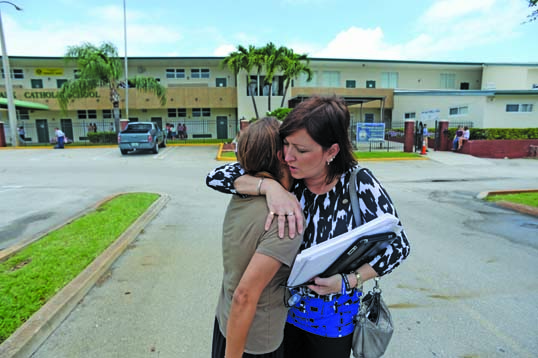 Ann Marie Chiste gives one of the teachers a goodbye hug. Not only did she attend St. Mark, so did her three children. Jerry Lower/The Coastal Star

Word that St. Mark Catholic School was closing came one day after the last of Candy Killian’s five children completed their primary education there.
“A lot of people tell me I’m lucky because my last child graduated, but I don’t feel lucky,” Killian told the audience one week later at a Mass for the east Boynton Beach school. “I feel a huge sense of loss, like a family member has passed away.”
The 44 percent drop in enrollment that forced the sudden closing left parents, students and teachers confused and upset.
But together they focused on words from the Bible at the May 31 Mass to accept their loss.
“To everything there is a season, a time to be born, a time to die, a time to plant and a time to sow,” Ann Marie Chiste read from Ecclesiastes.
Chiste, her brother and a dozen cousins were students in the 1960s through the 1980s. Then, her own three children received their K-8 education at St. Mark in the 1990s.
“I am sad. I am disappointed,” Chiste said at the Mass. “Yet negative feelings would serve no useful purpose, and I will try to push them from my heart.
“Instead, I chose to be thankful for having had St. Mark School in my life for over four decades,” she said. “We move forward as we must and cherish the memories that were made here.”
Killian also encouraged parents to remember the Catholic education that their children received.
“St. Mark School and parish has been our home, an extension of our family,” she said.
“St. Mark has taught, nurtured, loved and raised my children in our holy Catholic faith. They’ve been given an excellent education, they’ve been taught to love, to serve and to honor God — not just for one hour a week, but by the lives they lead.”
Factors that prompted the school to close weren’t discussed at the Mass.
But the Diocese of Palm Beach said the parents of 60 former St. Mark students had enrolled their children at the new Franklin Academy that will open on South Military Trail in Boynton Beach this fall.
Franklin Academy said many families were attracted by single-gender classrooms in which boys and girls are taught separately.
“Girls learn differently from boys,” spokesman Scott Szitken said. “We do it for academic reasons, but parents also like it from a social standpoint because it reduces distractions, particularly in middle school.”
Franklin Academy expects more than 1,000 students for its first year. Only 126 students enrolled for next year at St. Mark, which had 225 students during the 2012-13 school year.
St. Mark Principal Kelly Ruiz was frustrated, saying the charter school hired away five of her teachers before St. Mark was forced to close.
“Pop-up schools are a novelty,” Ruiz said. “We need to get back to the roots of our faith. Any society that removes God as its leader has chaos and no compassion. I will go down fighting for my faith.”
Some St. Mark families also were attracted away by the newly rebuilt Galaxy Elementary School. Public and charter schools are tuition-free, compared with the $6,000 a year that St. Mark charged.
Changing demographics also played a role to explain in the departure of students.
“Some families don’t live near the school anymore,” diocese spokeswoman Dianne Laubert said. “They moved west.”
But the reasons that St. Mark School closed weren’t the focus of the Mass, where students gave the offertory petitions.
“For all of us, as members of the St. Mark family, may we treasure the past with fondness and good memories, and build a future based on faith, hope and love,” third-grader Samantha Shortley prayed.
The diocese is helping the remaining 126 students transfer to other Catholic schools. Eighth-graders will remain together in a classroom at Pope John Paul II High School in Boca Raton.
Sixth-grader Kyle Felter gave the prayer for the departing St. Mark students:
“May we show that we value the academic knowledge we received here at St. Mark and give testament to the education we received by studying hard at our new schools, exhibiting exemplary behavior, and making our parents and teachers proud,” he prayed.