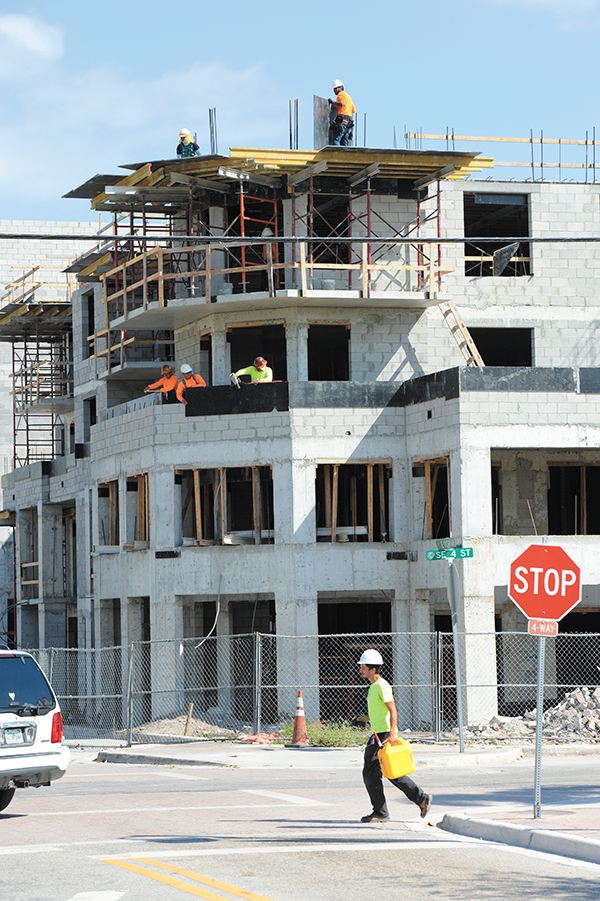 Work continues on the site of the planned 500 Ocean complex,

including the corner of Southeast Fourth Street and East Ocean Avenue.

The 500 Ocean apartment developers received a five-month extension to Dec. 31 to complete the luxury rental complex that sits at the Ocean Avenue and Federal Highway intersection in Boynton Beach.
LeCesse Development Corp., one of the project’s partners, sought approval from the city’s Community Redevelopment Agency because the developers will receive taxpayer subsidies after the apartment complex is finished. The CRA will give the developers a total of $4.4 million spread over 10 years.
In a Feb. 8 letter to the CRA, a LeCesse representative said the development team needed the extra time because of three problems: a shortage of skilled construction labor, unforeseen off-site underground conditions for utility placement, and complex coordination among the staff of the general contractor, architects and the city.
500 Ocean was supposed to be finished by now. The CRA is hoping the six-story building will jump-start the downtown.
Earlier in the Feb. 14 meeting, resident Susan Oyer, whose family owns commercial buildings across Ocean Avenue from the apartment construction project, brought in some pieces of construction debris. She said she found them while cleaning the property two days before.
The items she found were a 2-foot length of rebar and a 1-foot piece of wood, about 3 inches wide, with two nails sticking out from it.
“The 500 Ocean doesn’t secure its site,” Oyer said. “You can go in there and take any kind of construction materials you want. Guards are nowhere to be found.”
Oyer, a middle-school teacher, theorized that “someone was obviously looking to create mischief” with the wood and nails “because you don’t put that out there on the pavers without the intention of damaging someone’s tires.”
Vice Mayor Mack McCray said he was in favor of giving the extension, “but I want something in return: Better care of the construction site.”
John Flynn, acquisitions director for LeCesse, promised he would do better. “We do have a third-party general contractor,” he said. “As soon as I walk out of the building, I will be on the phone to him.”
Mayor Steven Grant asked for a celebration when it’s complete.
Flynn agreed.
When finished, 500 Ocean will have 341 luxury rental apartments in one- to three-bedroom units. It also will have 20,000 square feet of retail on the ground floor. It will offer tenant amenities that include a clubhouse, fitness center, theater room, bowling center, cyber café/game room, summer kitchen and a pool. A separate garage will have 664 parking spaces. None of the parking has been allocated for public use.