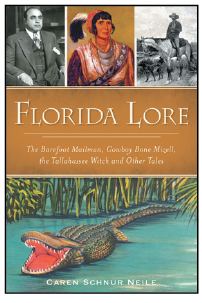 “I was 7 years old when I wrote my first little book,’’ said Neile, whose latest book, Florida Lore, tells the tales of some of Florida’s most famous, infamous and off-the-beaten-path characters and places.

Among them: Ma Barker, the 1930s leader of the Barker-Karpis Gang, who was killed in a gun battle with the FBI in 1935 in Ocklawaha; Elizabeth Budd Graham (the Tallahassee Witch); Ponce Inlet fishing legend “Big Man’’ Jess Linzy; “Cracker Cowboy’’ Bone Mizell; and a young man named William Powell who grew up to become the great Seminole warrior Chief Osceola.

In the 167-page book, Neile writes with the eye (and pen) of a master storyteller — which she is. The Boca Raton resident holds a doctorate in comparative studies from Florida Atlantic University, where she has taught storytelling studies since 1991.

She is also the former chairwoman of the National Storytelling Network and co-hosts The Public Storyteller, a weekly segment on South Florida public radio WLRN.

None of the stories in Florida Lore is original. As Neile points out in the introduction, she focuses on retelling stories originally passed down orally as folktales, legends, myths and urban legends. Each of those is captured in the book — from James “Acrefoot’’ Johnson (The Barefoot Mailman) to the Florida Skunk Ape to pirate Jose Gaspar.

“Mostly I wanted to collect what people were saying in our communities and about our heroes, scoundrels and places,’’ Neile said. “Florida is so much more than concrete and strip malls. How can you not know the ghost stories of your environment? Or the famous criminals in your environment?’’

Indeed. In Florida Lore, Neile takes readers to places such as Desert Inn and Restaurant in Yeehaw Junction, and the Seminole Inn in Indiantown, a favorite spot of the Duke and Duchess of Windsor.

Neile also tells the stories of some of Florida’s most colorful citizens whom readers might not know, including Grayce McCoy, the raucous real estate lady of Sebring; and Laura Upthegrove, the self-proclaimed “Queen of the Everglades’’ who was obsessed with the life (and crimes) of “Swamp Bandit’’ gangster John Ashley.

The stories, Neile said, “are the real Florida because that’s what people share.’’

And Florida Lore certainly is worth sharing.