“If you can't fly then run, if you can't run then walk, if you can't walk then crawl, but whatever you do you have to keep moving forward.”
— Martin Luther King Jr.

True to Dr. King’s words, Lee DiPietro knows only one direction — forward. It’s what’s guided her through more than 30 years of racing — and winning — some of the world’s most grueling events, from marathons to ironman triathlons.
Whether it’s running along A1A near her home in Ocean Ridge, along the rugged shoreline in her family’s summer home in Newport, R.I., or doing the ironman race in Hawaii, DiPietro knows only head-on forward motion, even if it means pushing her lean, 6-foot frame against the wind.

And, as DiPietro explains in her book Against the Wind, against the odds.
In the 267-page book (her first), published by Skyhorse Publishing, DiPietro details her love of running, but more important, her love of family, and how each helped sustain her through her husband Lee’s battle with cancer and at the same time, her eldest son Tim’s rehabilitation from an off-road vehicle accident that nearly cost him his legs and his life.
The book is available on Amazon.com and at Barnes & Noble, as well as at Gulf Stream Pharmacy and the Boynton Beach Postal Center on East Woolbright Road. 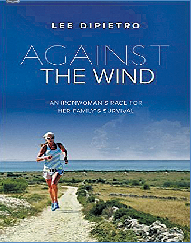 Against the Wind is an inspiring story of one woman’s determination to hold herself and her family together during a time — from 2010 through much of 2011 — that threatened to crumble them. DiPietro tells much of the story through emails she sent and received during those tough times. For a first-time author, DiPietro is a terrific storyteller.
“As the emails began to spread and be forwarded to family and friends, people kept writing me back saying I should write a book because (the emails) were so touching and beautiful,’’ said DiPietro, who won the women’s division of the 2008 Palm Beach Marathon at the age of 50.
“They thought it would just help people know that you can face so many things and get through it.’’
Most of those people don’t have the same refuge that DiPietro has in her running, but the message, she said, is still the same.
“Running is where I go for my strength,’’ DiPietro said. “But whether it’s running, writing or something else, find whatever you can to keep motivating you to put one foot in front of the other. You can find a place to find your inner strength. You can’t look back and ask why something happened. There always is something in your life that you can find, you just have to find it.’
Even if it means running against the wind.