James Gardner has been to Africa 27 times since 1968. The trophies mounted on the wall and the cases of African masks and artifacts in the den of his Ocean Ridge home reflect those treks to the Dark Continent. Gardner’s voice — deep and rustic — reflects his respect for Africa, its people, animals and diverse cultures.
“We’ve been so embroiled in the Middle East, we’ve kind of left Africa to itself,’’ Gardner said. 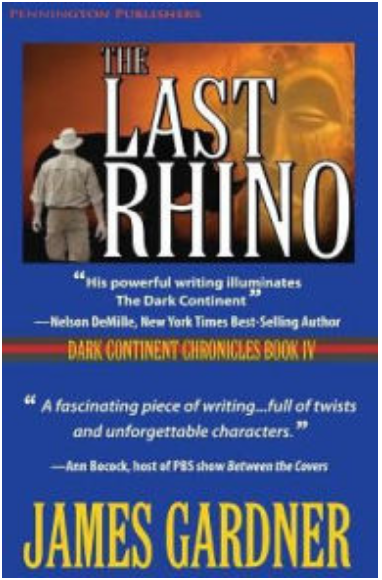 That means mass murders, animal extinctions, civil wars and unabashed government corruption that have been around since the European explorers in the 19th century. It’s the background in which we hear Gardner’s literary voice — bold and unflinching — in his latest novel, The Last Rhino, the fourth in his Dark Continent Chronicles.
“What I try to do with all my books, I take the problems of Africa and weave them into a thriller,” Gardner said.
In The Last Rhino we find hero Rigby Croxford searching for the killer of his wife, Helen, and his plans to avenge her death. Along the way, Croxford encounters ruthless poachers, a barbaric despot, Bushmen and an ex-lover who seeks his help (with a twist) in finding her daughter, who disappeared in Africa.
It’s a terrific tale — fast-paced and surprising — that further enhances Croxford as a great literary character and Gardner as a great adventure author in the mold of his friend, West Palm Beach resident and mega-selling author James Patterson.
Gardner’s prose in The Last Rhino captures the African landscape with the same detail as that of a National Geographic photographer. It’s clear that Gardner, an accomplished outdoorsman and wildlife conservationist, knows the African landscape and is as comfortable in Croxford’s fictional skin as his own.
It should be noted that while Croxford is a fictional character, he isn’t pure fiction. Gardner admits Croxford is a compilation of characters he’s met in nearly 50 years of African adventures.
“He’s the kind of guy you’d want to be in a foxhole with,” said Gardner, 73. “The Last Rhino is kind of a metaphor for him.”
To read The Last Rhino (available at Amazon.com) is to read more than just a great adventure story. The Last Rhino, perhaps even better than Gardner’s previous books in the series — The Lion Killer, The Zambezi Vendetta and The Honeyguide — reveals his love and compassion for a continent and its inhabitants (human and animal) that the Western world largely has exploited and tossed aside.
Only the Chinese — much to Gardner’s chagrin, if not downright anger — seem interested in Africa these days, and not for healthy reasons.
“There are a million Chinese living in Africa now,” Gardner said. “I think China has aspirations to annex Africa. They need the natural resources. Africa has all the minerals — gold, diamonds, coal.”
Gardner spent this past September in Africa.
“To me it’s like the last inland frontier,’’ Gardner said. “There are so many things that I love about it.’’
And Gardner’s readers will surely love The Last Rhino.