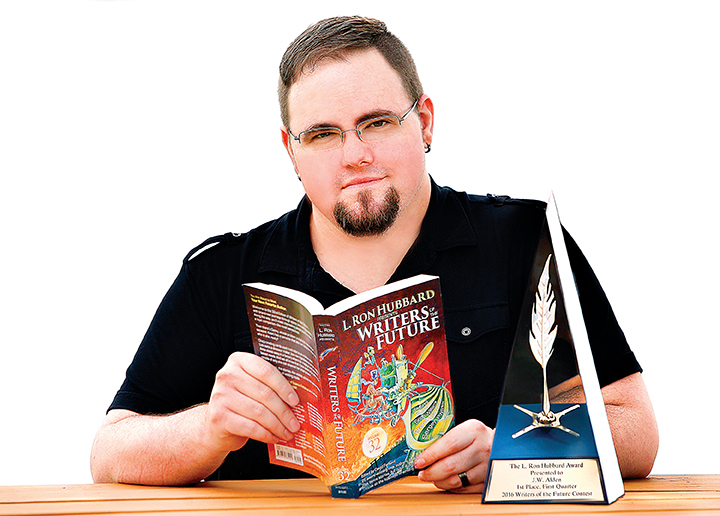 J.W. Alden of Hypoluxo got $1,000, a trophy and inclusion of his short story in L. Ron Hubbard Presents Writers of the Future. Tim Stepien/The Coastal Star

For 10 long years, J.W. Alden worked the graveyard shift at one of those mammoth retail warehouses. Maybe Costco, maybe Sam’s Club, he’d rather not say.
He was the guy who spent his nights driving the forklift, stacking giant pallets of bottled water and toilet paper over the aisles.
He got home about 6 a.m. His wife, Allison Goff, left for work at 8. During the day, he tried to write science fiction stories.
And then one morning she looked at him and asked, “James, when are you going to just be a writer? Why don’t you just quit and write full-time?”
For his wife, it wasn’t a tough call.
“He was a gray version of himself,” she remembers, “unhappy, stuck in the grind with no time to be creative.”
As the director of member and visitor services at the Flagler Museum in Palm Beach, she made a decent salary. She was climbing, happy in her career, but her husband clearly wasn’t.
“I wanted us both to achieve our goals and couldn’t stand to bear witness to him wasting his talent or his time,” she said.
That was three years ago.
In April, the Hypoluxo resident was flown to Los Angeles, put up in a fancy hotel for a week and given a check for $1,000 and a trophy for his story, The Sun Falls Apart, at the 32nd L. Ron Hubbard Writers of the Future awards.
“The only thing I had to pay for was my food,” he said. “It was a very cool experience walking down Hollywood Boulevard to the writers workshop every morning.”
Founded in 1983 by Hubbard, the prolific sci-fi writer and founder of Scientology, the award celebrates only a dozen writers out of thousands of submissions. Alden spent the week learning from such science fiction luminaries as Orson Scott Card, Tim Powers and Larry Niven, and came home with a copy of L. Ron Hubbard Presents Writers of the Future, Vol. 32, containing his work.
The Sun Falls Apart is the story of Caleb, a boy who has never seen the sun. Raised behind boarded windows and a fortified door, his only hope of freedom is by passing strange tests his parents give him and for which he must use a power he doesn’t understand.
“I’ve been writing off and on since I was a kid,” Alden said, “but my love of science fiction has changed over the years. As a kid, it was all about the sense of wonder and possibility, space travel and magic. Now I see science fiction and fantasy also have the potential for metaphor and allegory. You’re not confined to reality, so you can make a statement without being obvious.”
After stepping off the forklift in 2013, Alden was accepted almost immediately into the six-week Odyssey Writing Workshop at St. Anselm College in Manchester, N.H. Then he came home and turned the family condo’s spare bedroom into a writing cave.
“OK,” he told himself, “I want to see how far I can go and make this dream a reality.”
The dream is still more dream than reality, but it’s gotten more real. He’s sold 10 stories, about five to professional markets, and always been paid.
“I’ve never sunk to the unpaid level to get published,” he said, “even if I’m only paid a penny a word.”
Having a husband who sits home conjuring fantasy worlds after she heads off to work is fine with his wife.
“I wanted him to focus on his writing so I could see a different version of him,” Goff said, “one with a genuine passion and perseverance. Neither of us has looked back once.”
At the awards ceremony April 10, Alden thanked his wife.
“I can’t communicate in words how vital she is to my growth as a writer,” he said, “and a person.”
Now, with published stories and a recognized writing award, his next challenge is to find an agent and boldly go where so many struggling writers have gone before — a first novel.
“I do have an idea for a novel,” he said. “I’m a little nervous about it but also excited. It feels a little like reaching into the unknown.”
For more information, visit www.AuthorAlden.com and www.writersofthefuture.com.