It’s surprising whom you’ll find in a cemetery. Janet DeVries and Ginger Pedersen, for example, found such well-known West Palm Beachers as Burt Reynolds, Larry the Cable Guy, Ottis Anderson and Lois Frankel. OK, so none of these four has yet gone to the other side, but each is featured in DeVries’ and Pedersen’s new book Legendary Locals of West Palm Beach.
The authors — DeVries lives in Lantana and Pedersen in Boynton Beach — created the Historic Moonlight Cemetery Tours of Woodlawn Cemetery in West Palm Beach, which meant researching many of the city’s early pioneers through today athletes, actors, politicians and society leaders. 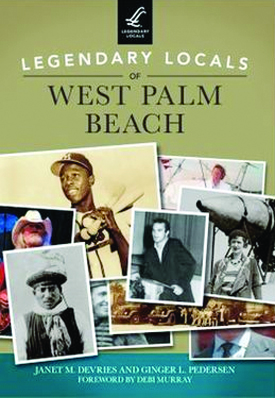 “They all have interesting stories,’’ said Pedersen.
You can read about their stories in Legendary Locals of West Palm Beach, part of Arcadia Books’ Legendary Locals series, which focuses on the famous and not-so famous residents of towns and cities. The book is available at Hand’s Office and Art Supply in Delray Beach, the 1916 Courthouse in West Palm Beach, the Palm Beach County Historical Society and Amazon.com.
Legendary Locals of West Palm Beach is the first book to focus specifically on the men and women who made major contributions to the city. The book is not the duo’s first foray into Palm Beach County history. The pair collaborated on The Deweys and the South Florida Frontier in 2012.
Their latest collaboration, published this past November, is about “people who are the fabric of our life,’’ said DeVries, whose previous books include Sport Fishing in Palm Beach County and Delray Beach (Postcard History: Fla.).
In Legendary Local, DeVries and Pedersen weave together an informative 127-page book complete with pictures and narrative that details the lives and legacies of not only people with the names of Mizner, Ecclestone and Kravis, but of those whose stories and contributions deserve telling.
That’s really where DeVries and Pedersen shine — telling readers about people such as Marion E. Gruber, who in 1896 founded the Gruber Hardware and Furniture Store; Augusta Savage, an African-American  woman who sculpted the famed Lift Every Voice and Sing sculpture for the 1939 World’s Fair; Voda Adkins, the “Dixie Witch’’ who was once a concert pianist; Lena M.T. Clarke, the city’s first postmistress who was later tried for murder in Orlando and found not guilty by reason of insanity; and Grace Morrison, who learned to fly in 1932 and was the first president of the Palm Beach County Airport Commission that was instrumental in building the West Palm Beach airport.
“You don’t want to tell a story that everyone knows, Pedersen said. “You want to find those individuals who people maybe didn’t know and tell those stories.’’
DeVries and Pedersen tell those stories well.

The authors will appear at 6:30 p.m. Jan. 18 at the Boynton Woman’s Club, 1010 S. Federal Highway.  They also are booked at the Society of Four Arts in Palm Beach and Palm Beach State College Lake Worth in March and April.