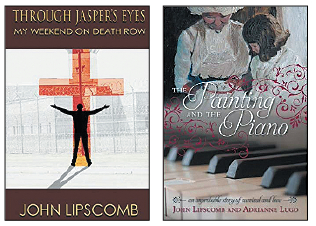 More than a decade removed, John Lipscomb could still hear the prison doors slam shut and the haunting “swoosh’’ of the airlock; still smell the unholy mix of disinfectant on the dining room floor and barely edible food.

Above all, Lipscomb could still heard Jasper’s words: “Man, you got the saddest story I ever heard.’’

Those were powerful words, considering that Jasper was on Death Row at Missouri’s Potosi Correctional Center.

A nondescript, small Missouri town, Potosi is far removed from Lipscomb’s upper-crust childhood in the posh St. Louis suburb of Ladue. But as he interacted with inmates, Lipscomb knew his decisions and actions made early in his adult life could have landed him in Potosi as one of them.

Instead, he was there as a stranger to spread the gospel through the Catholic Church’s Residents Encounter Christ program.

“I drove home drunk a thousand nights,’’ said Lipscomb, who now lives with his wife, Adrianne Lugo, in Ocean Ridge.

The pair collaborated on Lipscomb’s first book, The Painting and The Piano, which chronicles each of their battles with addiction.

In his second book, Through Jasper’s Eyes: My Weekend on Death Row, Lipscomb details his 2006 visit to the prison and his opening up to inmates about multiple DUIs, lost marriages, lost children, lost businesses and lost houses.

“This is what addiction does to you,’’ Lipscomb tells them, knowing that to a man, he was telling them what each already knew.

When he finished, he was approached by Jasper (a fictitious name), who had tears streaming down his face.

Lipscomb, who has been sober for nearly 20 years, used Jasper’s words as the inspiration for his 190-page book, published by Electio.

“I think I got more out if it (than the inmates), but it’s hard to say,’’ Lipscomb said. “You can see the guys get a lot out of it when you’re there through the smiles on their faces. It’s just about one human being helping another.’’

And it’s about some powerful words.