Unlike most artists of the Renaissance, Michelangelo Merisi da Caravaggio was famous during his lifetime. It was a brief, tumultuous life. Born in Milan, Italy, in 1571, Caravaggio — the father of Baroque art — died in poverty and mystery in 1610 in Porto Ercole, Italy.
Now, more than 400 years after he was found on a beach and died in a hospital run by monks, part-time Delray Beach resident Diana Nicosia weaves a tale in the same vein as The Da Vinci Code in her first novel.
Nicosia, an accomplished and well-known painter with studios in Boston and Delray Beach, used her knowledge of Italy and Italian art history as well as her eye for detail and research to produce a great piece of storytelling that’s part art history, part travelogue and part historical fiction. 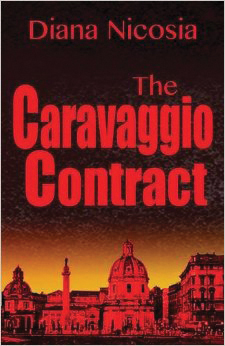 The Caravaggio Contract (Merrimack Media) is available on Amazon.com for $17.95. It’s a sweeping story that involves a Rome antiques dealer, two Caravaggio paintings missing since the artist’s death, murder and Italian crime syndicates.
“I’ve lived in all the places I write about — Naples, Capri, Rome,” said Nicosia, whose paintings of Italian landscapes have been shown at galleries worldwide.
Nicosia’s former home in Ansedonia, in southern Tuscany, was just above the beach where Caravaggio’s body was found, so she has a personal relationship with his history and the area.
“The land where he walked, I’ve walked,” said Nicosia, who began writing the self-published book more than eight years ago when the recession forced the closing of galleries that displayed her art. “It was like participating in my own funeral. I thought, is this the end of my career?’ ”
It turned out not to be the end of her art career, but the seedling of her writing career. Nicosia answered an ad in an art club newsletter that was searching for writers.
“I told them I hadn’t done any creative writing since college, but they accepted me,” Nicosia said.
One day when Nicosia was painting in the Vatican Gardens — a rare treat for artists —she began talking to priests who were visiting on a day trip. The conversation naturally turned to Caravaggio and his mysterious demise near Nicosia’s residence.
“They said, ‘You don’t know the story?’ So they told me the story.’’
What the priests told Nicosia became the inspiration for The Caravaggio Contract.
“It was fun to have that premise and fun to see how the story unwound,” Nicosia said. “It’s been a steep learning curve, but I’ve really enjoyed it.”