The Upshaw family from Boca Raton — (l-r) Nichole, Harper, 7, Blake, 4, and Donnie — walks through Wildflower Park on the west side of the Intracoastal Waterway north of Palmetto Park Road.

Wildflower Park’s first official visitors had nothing but smiles as they explored the city’s new gateway between downtown and the beach.
“This is a wonderful, momentous day that I’m so excited we are all cheering together,” Mayor Scott Singer said as he kicked off a little-publicized ribbon-cutting on Oct. 22.
“It’s here — finally,” said Dennis Frisch, chairman of the city’s advisory Parks and Recreation Board.
The 2.3-acre park features a wide promenade on the west side of the Intracoastal Waterway just north of Palmetto Park Road. It’s named after a nightclub that used to be on the property. The city bought the parcel for $7.5 million in 2009.
Two years later the City Council sought ideas for what to do with the property and received proposals from restaurateurs, retailers and a developer, who all wanted a commercial presence.
Council members also heard from Jose Barrera, a recent architecture graduate from Florida Atlantic University.
“I’m proposing a park, because it’s what I want … and I think it’s the right thing to do,” Barrera told them. “You actually want a waterfront park also; you just don’t know it yet.”
He attended the opening with his wife and children, ages 8 months and 3 years, in tow.
“At that time I had no idea that 11 years later that vision would come to fruition,” Barrera said. 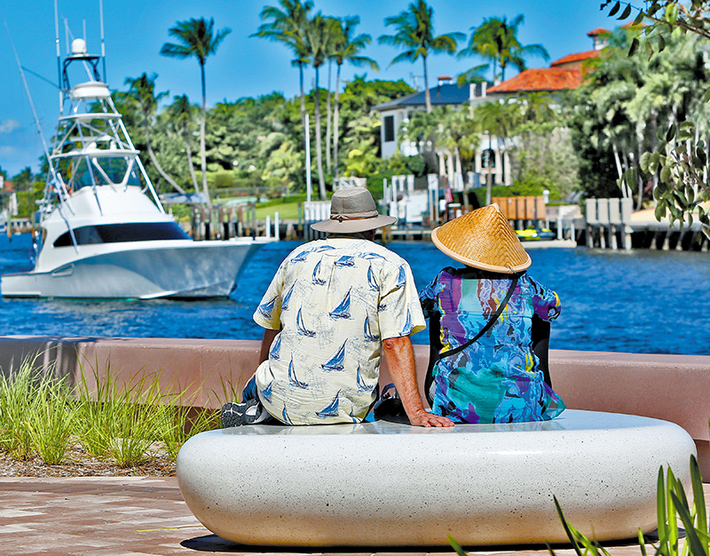 Domingo Barrera and Eva Chiang watch boats pass by at the park. They are the parents of architect Jose Barrera, one of the first to envision the space as a park. Photos by Tim Stepien/The Coastal Star

Also instrumental in making the parcel a park was Deputy Mayor Andrea O’Rourke, then president of the Golden Triangle Neighborhood Association, who backed a referendum to determine Wildflower’s fate.
“This park was overwhelmingly voted on by the people of the city of Boca Raton. To me this epitomizes perfect urban planning. We now have an oasis for respite in our downtown,” she said.
Singer, as a council member in 2016, hosted his own visioning session to gauge public sentiment, with attendees ranking 95 images of parks. The overwhelmingly most popular feature was a wide promenade that could connect the Wildflower parcel to Silver Palm Park on the south side of the bridge.
The new park also sports shade structures, a covered pavilion, picnic tables, large sculptures, an event lawn, play areas and a splash pad. The pavilion’s water fountain came courtesy of a $5,000 gift from the Rotary Club Downtown Boca Raton.
“To the children here today, I look forward to the day, including my children, I look forward to the day when you bring your kids here,” Singer said.
Together, improvements on the Wildflower site and Silver Palm Park cost $9.3 million. Blake Upshaw gets a lift from Harper Upshaw as they play on a new sculpture at Wildflower Park. Another visitor takes in the scenery. Photos by Tim Stepien/The Coastal Star

Officials chose a low-key opening so the Wildflower’s 51-space parking lot would not be overwhelmed. Two spaces are reserved for charging electric cars.
James Hendrey, also an early supporter of making the property a park, said it turned out to be “quite the centerpiece for the city” and met the overall goal of many people.
“We get to hear kids laughing and families having fun,” he said.
Still to come are finishing touches where the promenade passes under the Intracoastal bridge.
“There’s going to be beautiful lights. There’ll be beautiful color-painted columns there,” O’Rourke said. 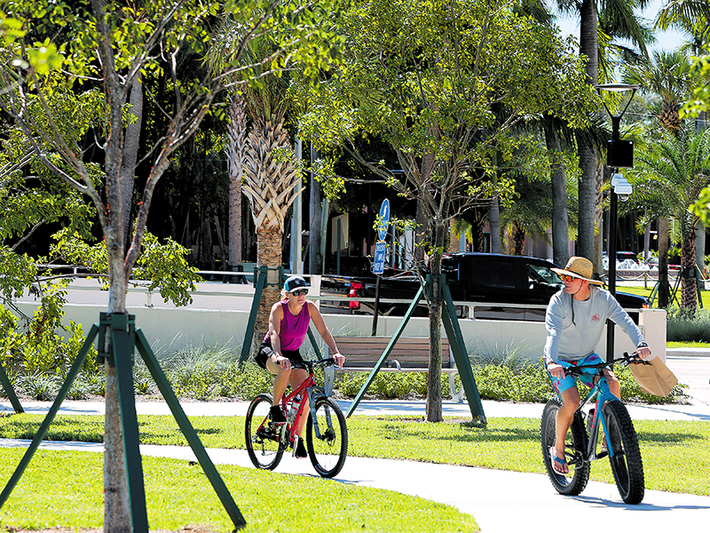 Suzanne Perkins and John Berger ride their bikes through the newly built Wildflower Park in Boca Raton after eating lunch in Mizner Park.