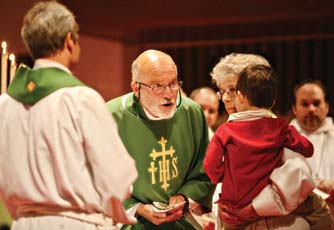 The Rev. Craig Burlington and the Rev. Nancy McCarthy baptize
Deven Martin Nayak at St. Gregory’s Episcopal Church.
It was the last baptism the retiring McCarthy performed there. 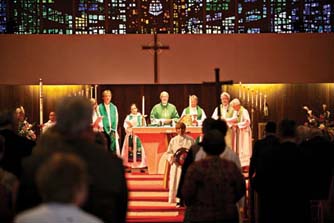 The large sanctuary with stained glass windows was built in 1966.

The idea for St. Gregory’s came one Sunday morning in 1953 when the mayor of Boca Raton and his wife were driving to their Episcopal church in Delray Beach.
Harold and Rubie Turner wondered whether Boca Raton had enough Episcopalians to form their own church.
“We had no money, no property and no building, but a lot of faith,” Mrs. Turner wrote.
Six decades later, St. Gregory’s Episcopal Church has 1,200 members. The spirited church near downtown Boca is known for its vibrant outreach missions and traditional worship services.
Other religious faiths helped St. Gregory’s get started. That spirit of interfaith cooperation continues as the church celebrates its 60th anniversary.
A Catholic carpenter donated a portable altar for the first worship services that were held at the Lion’s Club in 1953.
But the Lion’s Club hosted Saturday night dances, leaving the Episcopalians with stale smoke and beer cans to clean up on Sunday mornings before church. A member of the Bible Conference Church then donated temporary space at an apartment building that he owned.
“A Jewish man gave us property for our first church,” said the Rev. Andrew Sherman, the senior priest who delights in telling the interfaith story.
A.S. Weisman promised Harold Turner that he would give the Episcopalians two prime downtown lots if they were able to build a church in two years. St. Gregory’s answered the challenge.
“We haven’t forgotten that we exist through the gifts of other religious traditions,” Sherman said. “What motivated them to be so generous?
“They recognized that having spiritual faith in a downtown location was good for the community,” he said.
The original church building on Mizner Boulevard a block north of Palmetto Park Road was a single room with an altar on one end and a kitchen on the other. The larger sanctuary with glorious stained glass windows that replaced it was built in 1966.
“A lot of people thought it cost too much money. We didn’t have a large congregation at the time,” recalled Peggy McCall, 89, the church member with the most time in the congregation. “But we really began to grow once they built the new building.”
The congregation spent $500,000 for an Austin pipe organ in 1994. A parish hall and classrooms were added in 1998.
St. Gregory’s today is unique in several ways.
While most Protestant churches offer the alternative of a contemporary worship service, services at St. Gregory’s are strictly traditional. Five retired priests join the congregation’s two full-time priests to lead the worship that’s rich in liturgy.
“We’re really the only Protestant mainline church that’s committed to vibrant traditional services,” Sherman said. “It’s still part of our basic DNA as a congregation.”
St. Gregory’s built a school for 275 children in Haiti. But its leadership role in helping the less fortunate in Boca Raton is equally ambitious.
“I love all that we have so many outreach programs,” said the Rev. Nancy McCarthy, who joined the congregation in 1964 and later became a priest. “We are seen as a church that responds to community needs.”
In addition to feeding the poor, St. Gregory’s houses homeless families with children in a house on its campus. Two other Protestant congregations and two Jewish congregations also take turns helping families there through the interfaith Family Promise ministry.
Sherman and a Jewish rabbi formed the Boca Raton Interfaith Clergy Association.
St. Gregory’s became the location for interfaith dialogue on such topics as Middle Eastern affairs and the environment. The lecture series rivals the church’s concert series for popularity in the community.
“I’d like to think St. Gregory’s now sees itself as a leader in the community,” Sherman said.
“We’re aware that we are positioned in the heart of downtown,” he said. “With that geographic position comes a calling and a responsibility.” 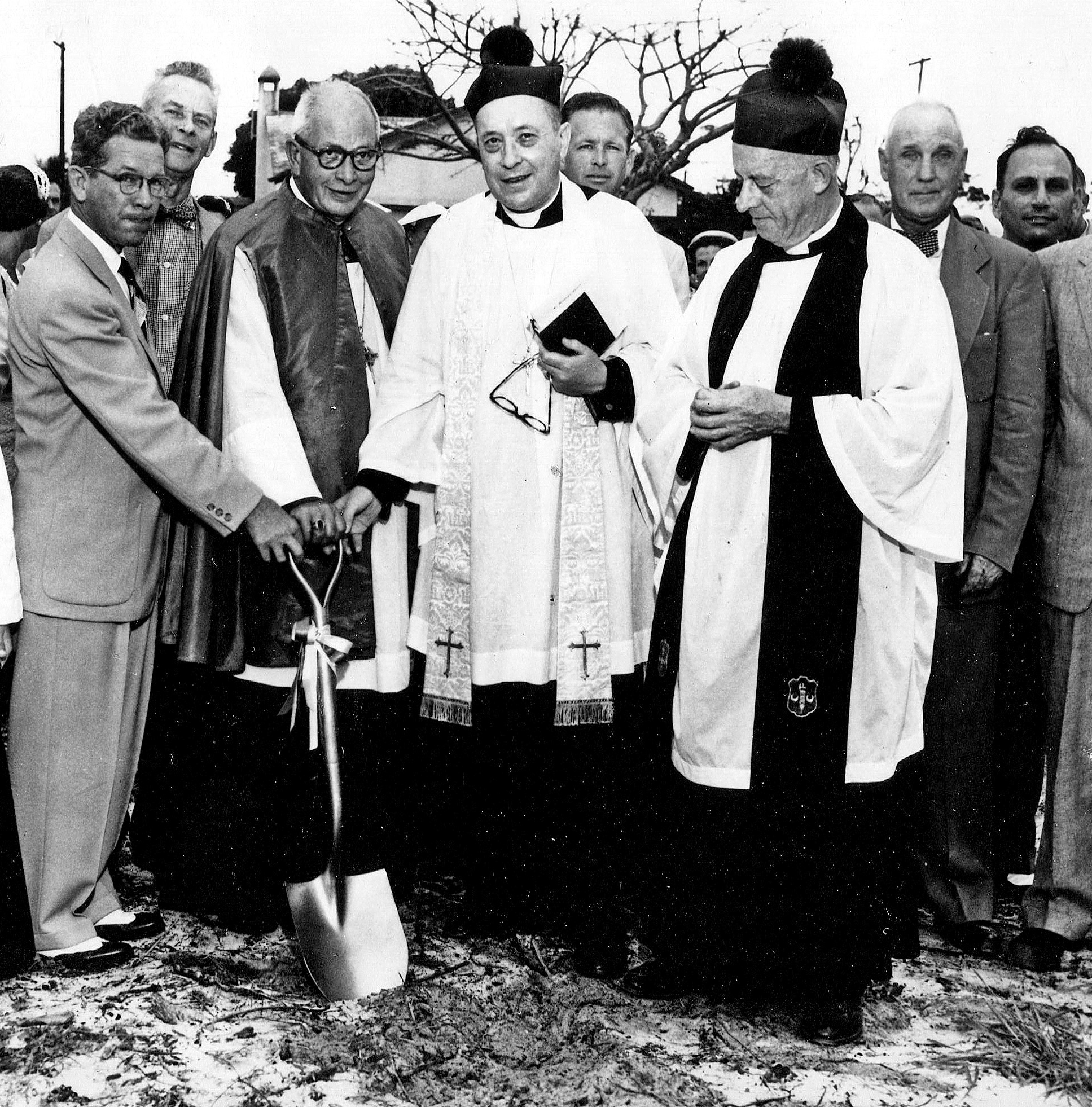 ABOVE: Holding the shovel during the 1956 groundbreaking for St. Gregory’s are (from left) Boca Raton Mayor Harold Turner, Bishop Louttit and the Rev. Earle Closson, church vicar.  To the far right in back is A.S. Weisman, who donated the land. Photo provided