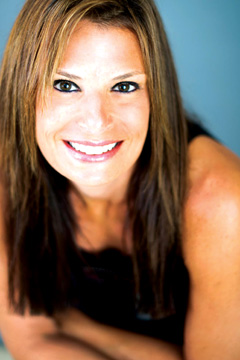 Stephanie Robin has survived Stage 4 breast cancer and
is currently undergoing treatment for cancer in her lungs. Photo provided.

By sheer definition, Stephanie Robin is the living embodiment of a survivor, but she still hesitates to include that bold word in her day-to-day vocabulary.

She is understandably tentative, after spending the past seven years battling metastatic breast cancer. But this 43-year-old warrior is sure of one thing.

“I am thriving,” said Robin, of Boca Raton.

At 36, Robin was diagnosed with Stage 4 breast cancer, had a bilateral mastectomy, hysterectomy and underwent chemotherapy treatments.

Now, her cancer has metastasized to her lungs and she is part of a cancer drug trial at Sloan Kettering Memorial Hospital in New York City.

She says her cancer is 90 percent smaller now than when she started the trial and she hopes — tentatively, of course — that she is starting to see the light at the end of a very long tunnel.

“I am quite hopeful that this is my wonder drug,” she said.

Robin’s mother was diagnosed with breast cancer twice, but genetic testing wasn’t as prevalent then as it is now. At the time, Robin had no idea that testing was available to determine if she carried the breast cancer gene — BRCA 1 and 2.

Once she had the test, she learned that she does indeed have the gene, and Robin has turned that bit of information into a tool of protection and, she hopes, prevention, for other women.

She and a friend, Elizabeth Weprin of  Delray Beach, started with a simple idea of helping raise awareness about early detection and genetic testing. It has morphed into the series of nonprofit concerts called Think Pink Rocks, which is held every year at the Centre for the Arts at Mizner Park.

A fitness enthusiast, certified CrossFit trainer and mother of two young children, Robin believes her active lifestyle also helps her cope with the debilitating side effects of cancer treatments, as well as the emotional fallout of dealing with a cancer diagnosis.

“I really do have the attitude that I can handle anything that comes my way,” she said.

The other half of the battle is gathering as much information as possible and knowing your options.