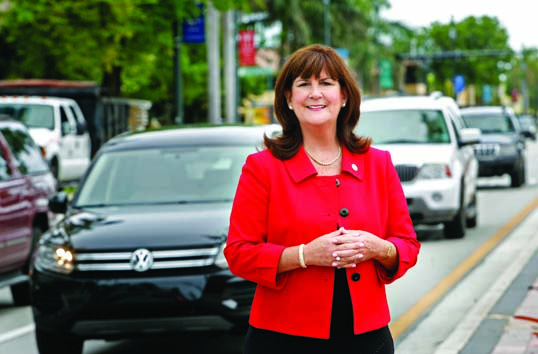 Susan Haynie was elected in March.

It’s more than poetic irony to suggest that Susan Haynie took the road less traveled to get to the Boca Raton mayor’s office. For four decades, Haynie has devoted her professional life to making all of South Florida’s roads less traveled.
Most mayors in Palm Beach County got to their office through careers as lawyers, small-business operators or political activists.
Haynie is the outlier in her peer group. After graduating from Lynn University, she started working for Boca Raton as a traffic engineer in the 1970s and, in one way or another, has been looking to solve transportation problems ever since.
When Boca Raton voters elected her in March, they got a hybrid — a mayor who is part politician and part traffic engineer. Haynie already has shown signs of being adept at both.

“I’ve always had an interest and a natural curiosity in transit,” she says. “It’s always intrigued me.”
That curiosity has taken Haynie on a long ride through the state’s circuit of planning and transportation groups and boards. You name the acronym and she’s probably done the time: She currently chairs the Palm Beach County Metropolitan Planning Organization and sits on the board of the Florida Metropolitan Planning Organization.
How many mayors have been selected “Woman Transportation Leader of the Year” by  South Florida Women in Transportation? Haynie won it last year.
Connections mean as much in politics as they do in transportation. Last month, the county’s MPO approved $8.5 million in federal money to supplement $10 million the state has set aside to build a second Tri-Rail station in Boca Raton near Military Trail and Glades Road — an important win for the city.
Haynie declines invitations to credit her influence as MPO chairwoman for getting Boca Raton the money. But for others, the connection is obvious.
“She’s tremendous,” says state Sen. Maria Sachs, D-Delray Beach. “She knows how to get things done. Her expertise is especially tuned to finding solutions for these public transit problems, and people in Tallahassee know that. I personally like her and I certainly respect her background.”
Bill Hager served with Haynie on the Boca City Council for seven years before winning a seat in the state House.
“I am a big fan of hers,” says Rep. Hager, R-Boca Raton. “She is a true public servant. She’s got no dog in the hunt. Mayor Haynie understands the traffic stuff, but she also understands how these regional traffic planning facilities work.”
Haynie deflects the flattery but is willing to allow that when she talks about transit issues, the right people will listen, and that can bring good things to the city.
“My expertise and involvement in transportation planning benefits Boca Raton by allowing me the opportunity to address our mobility challenges with resources from county, state and federal levels,” she says. “Having a second Tri-Rail station serving the Town Center mall area is critical to advancing our planning mobility initiative.”
Haynie believes the second station can be as effective as the city’s other stop on Yamato Road at giving commuters alternatives to cars. Passengers who get off the train at the Yamato station have four choices besides driving: They can walk to nearby businesses and offices; they can take a Palm Tran bus; they can hop on a connector shuttle to get downtown; or they can ride a bike, perhaps pedaling on the El Rio Trail that runs 9.1 miles along the edge the Florida Atlantic University campus.
“If you give people choices,” Haynie says, “they’re going to take them.”
She believes the proposed site for the new station has potential to appeal to a wide variety of commuters — even tourists who will spend time and money at the mall.
“The area is currently a destination for both workers and shoppers,” Haynie says. “This station is critical to advancing our initiative. It will provide easy access to transit, removing cars from the roads and improving mobility in our community.”
Before getting the Tri-Rail money for Boca Raton, Haynie and the City Council turned some heads when they turned down close to $50 million in state and county funds for expansion projects on Palmetto Park Road and Federal Highway.
When was the last time a municipality said no to money for new infrastructure?
What’s more, the city has told the county it does not want a half-dozen other projects that were scheduled to take place during the next 25 years. Some cynics have accused Boca Raton of not building roads for xenophobic reasons: to discourage out-of-towners from commuting through the city.
If you don’t build it, maybe they won’t come.
Haynie finds the suggestion amusing. But being selective about road projects is at her philosophical core.
“We don’t want to add more wide roads to the city,” she says. “It doesn’t make sense to see a mom pushing a stroller across eight lanes of traffic. We want Boca to be a walkable city.”
When she began her career as a city traffic engineer, Boca Raton’s population was half the 89,000 it is today, and the prevailing wisdom was that South Florida could build enough roads to satisfy its rapid growth. Today, Haynie and others at the forefront of a more progressive era in urban planning believe that new construction isn’t the answer.
“You can’t solve congestion problems with asphalt,” she says. “Technology has to be part of the solution.”
The city is using adaptive traffic signals to help relieve congestion on some of its busiest roads and intersections. Think of them as smart stoplights with sensors that are capable of measuring traffic demand in real time, and then adjusting the timing of signals to keep vehicles moving in the direction that’s needed.
“We will have to change our culture,” says Sen. Sachs. “We have become a lot like California, driving wherever we want to go. That can’t last. We will have to get people out of their cars and get them to accept that there are other ways to get around. We need leaders who know what it takes to move people from one side of the city to another, and Susan certainly knows how to do that.”
After only a few months in office, the mayor has gotten the culture change moving in Boca Raton.
“Transportation issues are about more than building wider roads,” Haynie says. “Today they’re quality-of-life issues. We need to take innovative approaches to deal with them.”