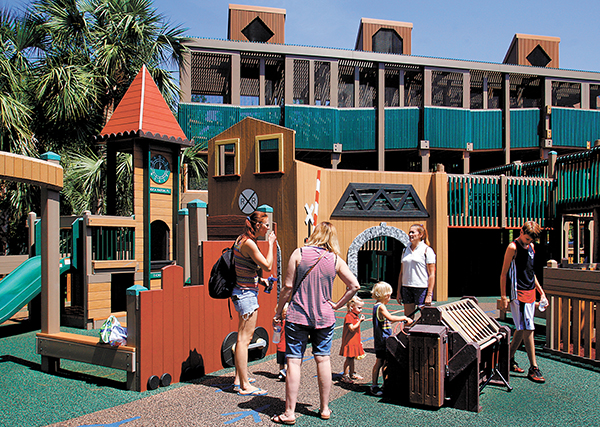 Families enjoy the Children’s Science Playground at Sugar Sand Park in Boca Raton on May 26.

The playground had more than 54,000 visitors in April.

The construction crew refurbishing the Children’s Science Playground at Sugar Sand Park ran up a $540,000 bill for extra work in the six weeks before the facility opened.
The bill, presented at the May 22 meeting of the Greater Boca Raton Beach and Park District board, came after district commissioners paid an additional $439,000 on Feb. 21 thinking it was the last bill for the project. The playground reopened March 25.
“I’m a little bit surprised to have a change order on top of all the change orders, all the things that changed before. … I’m just baffled by the whole thing,” Commissioner Craig Ehrnst said.
“Isn’t there something that can be put in [a contract] that protects us from overages over like 20 percent of the cost of the project?” Commissioner Erin Wright asked.
The district had expected to pay $2.1 million renovating the playground, which was built mostly by community volunteers more than 20 years ago. Instead, the final tab is closer to $3.2 million.
Arthur Koski, the district’s executive director, attributed the overrun to the fact that commissioners hired a structural engineer as a “special inspector” to monitor the work since building the park facility was far different from building a house.
“He made changes or directives on the day of opening. He saw things that needed to be correct,” Koski said.
As an example, the inspector required the near-last-minute addition of 600 extra bolts, bracing and screening to the multilevel structure for safety.
“We had to be safe, and the special inspector was putting his reputation on the line,” Koski said.
Also, the original structure was built without obtaining a building permit and some things were in unusual places.
“There was a huge electrical service box that was discovered when they were laying out the parking-lot sidewalks … underneath some grass and mulch, and that was the service for the whole park. That had to be relocated,” said Mike Fichera, the district’s contract administrator.
Still, commissioners were upset, in part to hear about the extra work long after the playground’s grand reopening.
“This expense, it’s a very tough pill to swallow, especially since the playground’s been open now for two months approximately and we’re just hearing about it,” District Vice Chairman Steve Engel said. “From the time the first shovel was turned, there have been discoveries — discoveries of bad posts, discoveries of bad bolts and so on down the line.”
The 50 percent cost overrun comes at a delicate time for the district, which is negotiating to buy the now-closed Ocean Breeze golf course in the north end of the city for $24 million. Critics of the deal say the price is too high. Mayor Susan Haynie has asked for more financial details.  Fichera assured beach and park commissioners he had gone through every item on NuJak Construction’s change order to ensure they were not being asked to pay for anything twice.
“I went through every one of the receipts,” Fichera said.
Commissioners paid the bill at a May 30 meeting after questioning Clifford Moore, vice president of Broward County-based NuJak.
“Everything that was submitted after that [February change order] was above and beyond what we were asked to do,” Moore said.
Engineer Claudio Lapilli, the special inspector, told commissioners that next time, they should “bring the bulldozers first, with a brand-new design you can fully understand, complete with all the nuts, every bolt accounted for.”
The playground, which features hands-on, scientific experiences such as a space station, a giant head and DNA-coded walkways, is turning out to be wildly popular. More than 54,000 people visited it during April, its first full month of being opened.
All levels of the now all-inclusive playground are designed to accommodate wheelchairs and baby strollers; the ground is covered with a rubberized mat instead of the mulch it had before.
The structure was closed in June 2015 for safety concerns. Construction did not begin until March 2016 after district commissioners threw out a first round of bids, saying they were too high. A planned reopening in mid-November was pushed back several times as NuJak encountered unforeseen conditions.