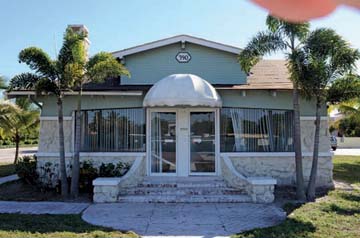 Built in the 1920s, The historic Luff House is one of the few remaining bungalows

that used coral rocks for the foundation, chimney and face.

The immediate prospects of the Luff House, a historic home without a historic designation, appear as hazy today as they did when businessman James Batmasian purchased the home in September.
Mary Csar, executive director of the Boca Raton Historical Society, said the two-story, 2,492-square-foot Luff House — named for pioneer residents Theodore and Harriet Luff — was built in the 1920s in a Florida interpretation of the bungalow style, employing coral rock on the porches and chimneys. Csar said the structure, at 390 E. Palmetto Park Road, is  “a rare survivor” in Florida and is unique to Boca Raton.
“That coral rock was very common to houses in the 1920s, but there are hardly any left now,” Csar said. “It was a lovely home. It has been painted since, but it was a kind of tan color, quite beautiful and fairly large for an early house.”
According to the Palm Beach County Property Appraiser’s website, the property’s market value was set at $854,723 for the 2014 tax year. Batmasian is a Boca Raton real estate mogul and philanthropist who owns much property in downtown Boca, including Royal Palm Plaza. The website of his company, Investments Limited, says it “has become a cornerstone of the community and actively supports the numerous organizations that make South Florida a wonderful place in which to live, work and play.”
Phone calls to Batmasian and his acquisitions manager Armen Batmasian were not returned, and Tim Setterlund, marketing manager for Investments Limited, declined to comment for this story.
“I believe Mr. Batmasian is willing to let somebody lease the house, but they would have to do the interior improvements,” Csar said. “The site is zoned commercial, so its value is a commercial one. Our hope is a tenant will lease the house and use it for the time being. Our overall hope is that someone will come along and move it somewhere else, off the property.”
That would be a costly venture. Csar said a former owner looked into moving the house to a different location, but a suitable plan was never put into place. Developer Greg Talbott offered the home to the Historical Society if it would pay the moving costs.
A 2006 bid revealed just a three-block move to the east to Silver Palm Park, along with accompanying foundation costs, would come to about $137,000.
“Today it could go into the hundreds of thousands of dollars,” Csar said. “And it depends on where you would move it. Finding a spot of land would be challenging and the farther away you move it the more expensive it is, because Florida Power & Light would have to take down light poles and move power lines. You have to pave the way, so to speak, and that would be the expensive part.”
Csar said the Historical Society does not have sufficient funds to take on the expense of moving the Luff House. Instead, she sees its role as “an information source” to the public in the hopes that someone might step forward to save the house.
“We want people to know the house is historic and does have value to both the history of Boca Raton and South Florida,” she said. “I don’t know what the Batmasians think about moving it right now. I don’t think Mr. Batmasian’s long term plan is to keep it.”