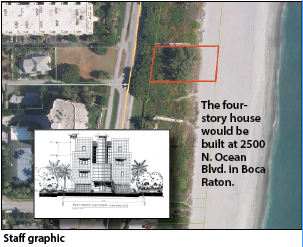 after OK catches some off-guard

The state’s environmental agency has issued a “notice to proceed” on construction of a controversial beachside mega-mansion, but Boca Raton officials say the owner of the undersized lot has more hurdles to cross.
“You are hereby granted final authorization to proceed with construction” of a four-story, single-family dwelling at 2500 N. Ocean Blvd., according to the notice issued Oct. 18 by the Department of Environmental Protection.
The entire lot, located on the ocean between Spanish River Park and Ocean Strand, is east of the state’s Coastal Construction Control Line, which calls for stricter scrutiny of proposed projects.
But the landowner, Natural Lands LLC, still must pass review by the city’s Environmental Advisory Board and obtain a Coastal Construction Control Line variance and a building permit from Boca Raton, Deputy City Manager George Brown told the City Council on Nov. 22.
Brown said the city was surprised that the DEP issued the permit without receiving a letter directly from Boca Raton stating that the proposal does not conflict with city zoning codes. The DEP confirmed that “although it is not their usual practice, they accepted a copy of [a city resolution] for the lot width variance, instead of a letter,” Brown said in a memo.
The state agency’s files show the resolution was sent to Natural Lands with a cover letter in June from city zoning officer John Harbilas, who called it his “response to a request for a zoning confirmation letter.”
“The subject property satisfies the minimum requirements of the [multifamily zoning] district, including the minimum lot size requirements, and also the minimum setback requirements,” Harbilas wrote the landowner. Natural Lands forwarded the letter to the DEP.
The City Council in December 2015 reversed a Zoning Board of Adjustment decision that prohibited construction of the 10,432-square-foot house. The zoning board had declined to approve variances for property width and front-yard setbacks.
Furious residents complained that the structure would change the face of the beach, disorient nesting sea turtles and set a precedent for even more development.
Council members defended their decision, claiming the city would likely face litigation because more than a dozen similar variances had been approved before. Natural Lands had dropped its request for a front-yard setback, moving the proposed home almost 15 feet closer to the ocean. Approved in a resolution was an 11.5-foot variance from the minimum lot width of 100 feet.
At the Greater Boca Raton Beach and Park District’s Nov. 14 meeting, Al Zucaro, of citizen watchdog group Boca Watch, said residents were “misled” by the City Council, who told them the proposal “had many steps to go before any reality might be attached to it.”
“All the other side had to do to get that permit was to demonstrate that the city of Boca Raton had granted the zoning approval. And the variance did that,” Zucaro said.
Department of Environmental Protection spokeswoman Dee Ann Miller said the CCCL is “a line of regulation, not prohibition” and “should not be confused with setback lines or lines of prohibition which are established through comprehensive plans and local zoning laws.
“That being said,” Miller continued, “as part of the permitting process an applicant is required to submit written evidence from the local government stating the proposed activity does not conflict with local setback requirements or zoning codes — which the applicant did.”
The DEP permit, which is posted at the site, expires Oct. 7, 2019. Natural Lands contacted the city Nov. 4 to begin the Environmental Advisory Board review, Brown said. The item will be scheduled for an advisory board meeting once the landowner resolves questions from city staff, he said.