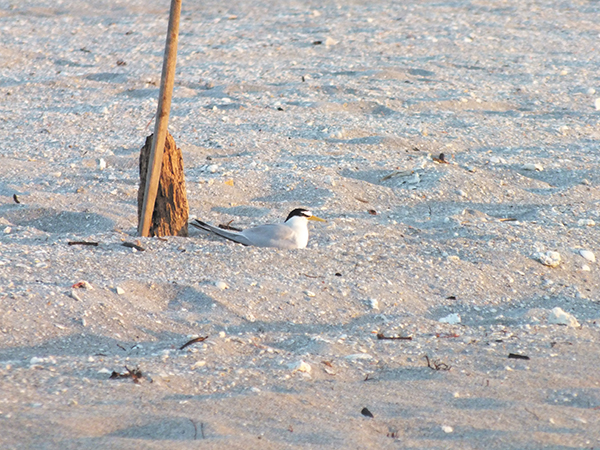 A least tern sits on eggs on the beach in Boca Raton. 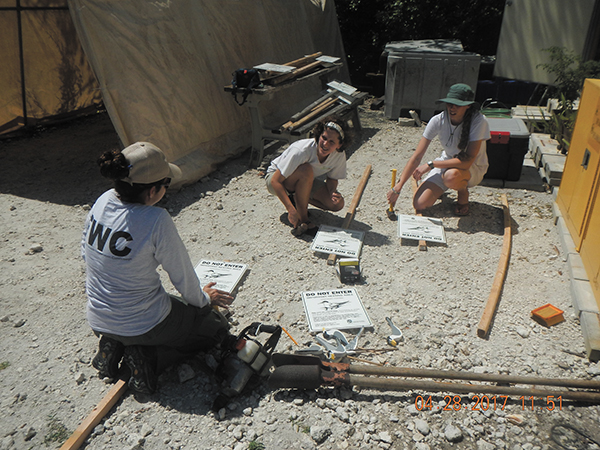 make signs for a perimeter fence to deter beachgoers from walking on the nest. 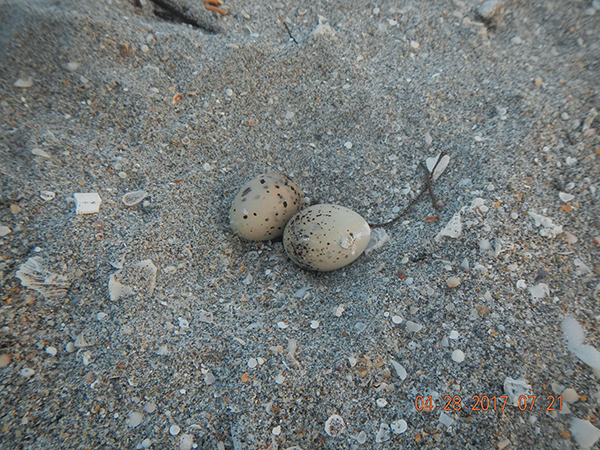 The dappled color of the eggs is a good match for the sand on the beach.

There was a glimmer of hope when a wildlife biologist spotted the first confirmed least tern nest in 25 years on Boca Raton’s beach in late April.
The small, fish-eating shore bird, listed on Florida’s threatened species list, has had a rough go of it of late, with its nesting habitat along the shoreline disappearing due to development.
So when two eggs appeared in the nest on the south end of Spanish River Park, biologists and others cordoned off the area to protect it from beachgoers who might inadvertently disturb it. They even put out a few decoy terns to encourage other pairs to nest.
But then last month, the saga of Boca’s least terns took, well, a turn for the worse when an early morning inspection found an empty nest.
The prime suspect in the egg thievery is a crow.
“Those crows, they’re pretty smart,” said David Anderson, sea-turtle conservation coordinator at the Gumbo Limbo Nature Center.
Anderson, who monitors sea turtle nests, came across the least tern nest while noticing a bit of tern activity.
He also witnessed one member of the nesting pair of small yellow-beaked birds with black caps fighting off a crow while its mate sat on the nest.
Anderson said the prognosis for the nest, little more than a small divot in the sand, was poor from the start because of the abundance of predators, including foxes and raccoons, as well other animals.
Soon after the eggs vanished, Anderson and others noticed the small colony of least terns moving south to just north of the Boca Inlet. By late last month, the terns were gone from the beach.
There may, however, be a happy ending to the story of the Boca Raton least terns, since these smart little birds have adapted to a loss of habitat by nesting on flat, gravel-covered rooftops common in South Florida.
“The colony is gone from the beach but it could have moved to a rooftop in the area,” said Natasha Warraich, an assistant regional biologist for the Florida Fish and Wildlife Conservation Commission, who was called in to cordon off the beach nest and help protect the nesting pair.
For the terns, the rooftops may be a safe haven from small mammals and most human disturbances. They may also be a defense again rising sea levels and frequent strong storms.
Anderson hopes that members of the least tern colony in Boca — one of the few remaining beach-nesting colonies in Florida — will return next year as they make their way from South America, where they migrate from our winters.
In addition to the one in Boca Raton, least tern beach-nesting colonies have been spotted on Snook Island and Grassy Flats in the Lake Worth Lagoon, and on the shores of Palm Beach.
“The last five years, we’ve seen a significant increase in tern activity,” Anderson said.