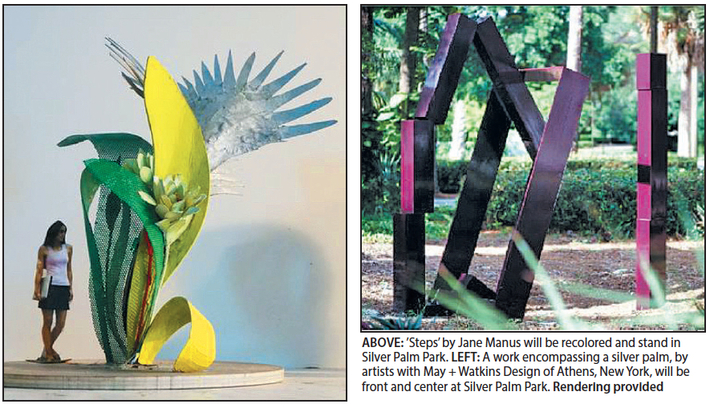 With construction of Silver Palm Park in the downtown finally underway and work at the adjacent Wildflower Park slated to start soon, the parks’ art components have been selected.
Two sculptures will be loaned to the city by the Boca Raton Museum of Art and will be placed along the waterfront in each park. The artists are Jane Manus of West Palm Beach and Jeff Whyman of Delray Beach. 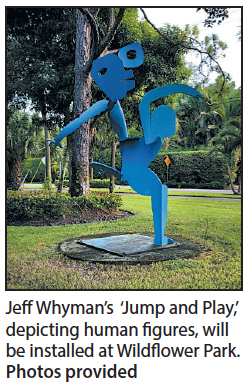 The city is commissioning two other works by artists with May + Watkins Design of Athens, New York, that will be located at the corners of each park closest to the intersection of Palmetto Park Road and Fifth Avenue. They will be similar and are intended to thematically connect the two parks while representing nature and the coast.
The aluminum works, both over 10 feet tall, depict leaves and flowers in pastel shades of green, yellow and blue with accents of bright coral. The one destined for Silver Palm Park will incorporate that tree. Both will be illuminated, Jennifer Bistyga, the city’s coastal program manager, told the council on Nov. 22.
Other art that doubles as an interactive play area will be located in Wildflower Park. Children will be able to climb on it to play and explore.
Council members were thrilled by what they saw and gave city staff the go-ahead to finalize agreements with the museum and May + Watkins Design that likely will be approved in December.
The cost of the May + Watkins pieces will be finalized by then. The approved budget for art at the two parks, which total 6.4 acres, is $125,000.
“I love the idea of having flowers and trees being the signature pieces at these two parks,” said council member Andy Thomson.
“I am very pleased,” said council member Monica Mayotte.
“Yes, yes, yes. As quickly as you can,” Deputy Mayor Andrea O’Rourke said about finalizing the agreements.
Museum of Art Executive Director Irvin Lippman offered to loan the city four sculptures one year ago. Council members liked some of the artwork, including the pieces by Manus and Whyman, but gave poor reviews to others, even after Lippman returned to the council offering additional choices.
Even so, they thanked Lippman for his generosity.
While council members weren’t quite sure what they wanted, they indicated the art should reflect the waterfront and nature.
O’Rourke and Mayotte suggested works that inspired “selfie moments” and were “Instagram-able.”