In an age when the word “hero” is used to describe sports figures, celebrities and various unremarkable achievers, the stories of real heroes — people who put themselves at risk to save others — become more meaningful.

Consider the stories of Boca Raton Police Officer Jimmy Jalil, Police Sgt. Shannon Wendlick and park maintenance supervisor David Hill. Their acts of spontaneous bravery in the face of personal risk won them Heroism Awards from the Safety Council of Palm Beach County. The council honored the trio and other heroes at its 14th Annual Safety Awards luncheon March 10. 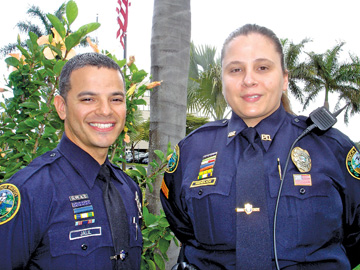 When Boca Raton police officer Jimmy Jalil arrived at the scene of an accident on I-95 last December, two men were trying to extricate a woman from a crushed car. The woman was trapped in the front seat, pinned by wreckage, and the front of the car was on fire.

After trying in vain to break a rear window with his police baton, Jalil grabbed his weapon and fired two rounds into the window at a downward angle away from the passenger. With flames climbing higher, he cleared the broken glass away with his baton, and then pulled the woman up over the front seat and out the rear window to safety.

“I tried to work as fast as possible. It only took a minute, but it seemed like forever,” Jalil said.

He credits the SWAT team training he received last year for enabling him to take quick, decisive action.

Police Sergeant Shannon Wendlick was on routine patrol in the Boca Riviera neighborhood one night last July. She watched as a suspicious car pulled into a home’s driveway.

“I was thinking, ‘I might have a group of kids breaking into cars here,’ ” Wendlick said. “But for everything to break loose as quickly as it did, I wasn’t expecting that.”

What “broke loose” was an attempt on Wendlick’s life. As she approached the vehicle on foot, the driver threw the car into reverse and tried to run her over. A passenger aimed a handgun at her. She fired at the vehicle. The driver crashed into a tree and fled on foot.

Wendlick took the car’s two other occupants into custody while advising police dispatchers about the incident and the fugitive driver.

“That was the closest call I’ve ever had,” said Wendlick, a 17-year veteran of the Boca police force. “Afterward, when I thought about the severity of what could have happened, it was pretty frightening.”

Her two captives later confessed they were planning a home invasion robbery.

But that’s not the end of the story.

Palm Beach County Sheriff’s investigators subsequently tied the weapons, ammunition and masks found inside the car to a double murder at a West Palm Beach Circle K and to the murder of a 17-year-old girl outside a nightclub in Lake Worth. Boca Raton park maintenance supervisor David Hill was walking toward a Boca Raton wildlife preserve he oversees just north of Dixie Highway last May when he was jolted by the horrifying sight and sound of a triple-rollover car crash. He’d never used the emergency button on his two-way radio before, but he did then, informing the 911 dispatcher of the accident as he raced to the scene.

“I thought for sure when I got over there, I’d see dead bodies,” Hill said.

Instead, he found a hysterical grandmother and her 2-year-old granddaughter, still strapped into their seats and dangling sideways in a damaged, overturned van. Assisted by another bystander, Hill crawled through the back of the van over broken glass and debris to un-trap the toddler from her car seat. Then he cut the woman’s seat belt and got her out, too. He comforted the pair until police and fire-rescue personnel arrived.

Does Hill consider himself a hero? “Not at all,” he said. “There were two other people who helped out. Besides, I hope anybody would do the same for me in a similar situation.