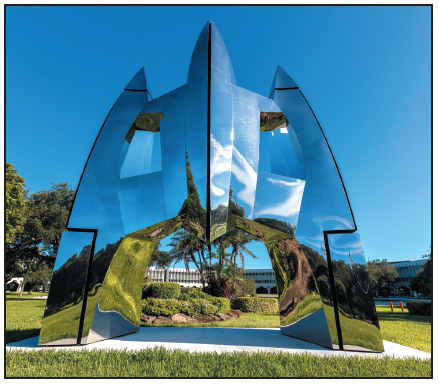 The Hubert Phipps sculpture rises from the grounds at the Boca Raton Innovation Campus. Photo provided by Jacek Gancarz

Jutting up from the green grass with the blue sky and Marcel Breuer’s iconic IBM building as backdrop, Virginia artist Hubert Phipps’ monumental stainless steel sculpture, Rocket, brings a touch of majesty to the Boca Raton Innovation Campus.
The 30-foot sculpture is part of an Art in Public Places initiative facilitated by Irvin Lippman, executive director of the Boca Raton Museum of Art, in partnership with commercial real estate company CP Group, which owns the campus.
“It’s the perfect opportunity to showcase Phipps’ art with Breuer’s architecture. There’s a synergy between the two — it’s meant to be,” Lippman said during the sculpture’s unveiling ceremony on the campus lawn Sept. 20.

Weighing in at 9.8 tons, with more than 7,000 square feet of stainless steel, the highly polished sculpture reflects the ambient colors of the sky and lawn, nearby trees and lake as well as visitors, and with its imposing aura makes its presence known.
Fabricated in Hangzhou, China, at the Tany Foundry, the large-scale sculpture took more than two years to construct and was shipped from China to New Orleans and then trucked to South Florida.
Juxtaposed in front of Breuer’s 1969 building where the personal computer was invented, the rocket mirrors Breuer’s concrete buttresses that similarly appear to lift the building from the ground.
Installing the sculpture as a major public art initiative is not the end of the story.
Lippman has future plans, including making Rocket the centerpiece of a full-scale indoor and outdoor art museum on the BRIC campus. His emphasis is to extend art outside of the museum’s walls and create a gallery showcasing works by Dorothy Gillespie, another Virginia artist.
Phipps, a pilot with a lifelong fascination with aviation, science fiction and futurism, remembers watching the moon landing in 1969 when he was 10. Also ingrained in his memory are recollections of hearing the rocket engines taking off from the Pratt & Whitney facility in Indiantown when he was a child.
“I am honored to have my artwork selected for this public art initiative by the Boca Raton Museum of Art,” said Phipps, who experiments with various forms and materials, including steel, bronze, wood, composites, plaster, glass and marble.
His works are featured in the permanent collections of major museums, institutions and private collectors, including the Boca Raton Museum of Art.
“My inspiration comes from all the amazing things we do as a human race as far as pushing the envelope and reaching for the stars,” he said.
“With all the things going on in the aerospace world today, this couldn’t have worked out better.”