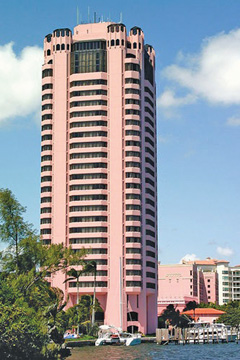 In 1967, Arvida tears down part of the original
Cloister to build the tower. It is the tallest structure
between Tallahassee and Miami at the time.

1925:  Palm Beach architect Addison Mizner arrives in Boca Raton.  He and his Development Corp. hope to build Mediterranean-style structures for commercial and residential use on a 1,600-acre tract of land. Their plans include a never-built Ritz-Carlton on the beach.

1926: In a hurry to bring customers for his development to Boca Raton, Mizner opens a smaller hotel, the Cloister Inn. It’s under Ritz-Carlton management on the shore of Lake Boca Raton.  The opening sparks a promotional buildup that ultimately changes Boca Raton from a sleepy village into a resort community.

The inn has Spanish-Mediterranean, Moorish and Gothic influences. It is characterized by hidden gardens, barrel-tile roofs, archways, ornate columns, finials, intricate mosaics, fountains and beamed ceilings of ornate pecky cypress. The per room building cost was $10,000.

1928-1930: Geist enlarges the Cloister Inn and creates the private Boca Raton Club, a golf club.  He builds the Cabana Club, south of the inlet, offering 200 private beach cabanas, informal dining rooms and card lounges. Famed architects Schultze & Weaver, who also designed the Biltmore Hotel in Coral Gables and The Breakers in Palm Beach, were the architects for the project that opened in January1930.

1942: The U.S. enters WWII. Boca Raton’s airport and coastal locale make it ideal for an Army airbase. The U.S. government acquires 5,860 acres from more than 100 property owners to construct it.

Meanwhile, the Army takes over the Boca Raton Club for offices, classrooms and officers’ barracks while it builds the air station, the country’s only radar training school.

1945: The property reopens as the Boca Raton Hotel & Club.

About 1950: The hotel is painted pink for the first time. In Mizner’s time, the club appears to have been white and cream-colored.  It apparently was Schine’s wife, Hildegarde, who liked the deep dusty rose color. The current color is much pinker than the 1950s color.

1956: Arthur Vining Davis, founder of the Aluminum Co. of America, purchases the Boca Raton Hotel & Club. He creates Arvida Development Corp., an acronym of his name.

1967: Arvida tears down the southeastern wing of the original Cloister Inn to build the 27-floor tower that holds 257 rooms and a restaurant on top. When built, it is the tallest structure between Tallahassee and Miami.

1968: Arvida opens the Great Hall, a convention center, which incorporates the structure of the Schultze  & Weaver-designed outdoor swimming pool with its four corner towers.

1980: The Boca Beach Club on the beach replaces the old Cabana Club, which is demolished. The new club costs $20 million and features a half-mile of private beach, two swimming pools, 214 rooms (including eight suites) and two restaurants.

1983: The Boca Raton Hotel & Club is sold to Boca Raton Hotel and Club Limited Partnership with VMS Realty Corp., a Chicago-based real estate developer, installed as the general partner for the limited partnership.

1986: The property becomes known as the Boca Raton Resort & Club, and acquires the Boca Country Club about seven miles away.

1996: The Boca Raton Resort & Club completes a $165 million recapitalization. The resort renovates guest rooms and suites in the Cloister and Tower. Construction begins on the Mizner Center, a $40 million meeting and catering facility.

2004: An affiliate of the Blackstone Group, a private investment banking firm, purchases BRI in December for $1.25 billion.

2005: The name of BRI is changed to LXR Luxury Resorts.

2005-2006: Refurbishment of the resort begins, including renovation of the main lobby, redesign of guest rooms and the addition of the Old Homestead Steak House (well known to New Yorkers). The new décor includes a light beige and white ceiling in the lobby, slate and stone floors and white leather furniture.

2007-2008: The opening of Cielo Restaurant at the top of the Tower, the debut of the Palm Court, the addition of Morimoto’s Sushi Bar by chef Masaharu Morimoto of Iron Chef fame, Serendipity Restaurant and the redesign of the Family Room.

2009: The 212-room Boca Beach Club reopens following a $120 million renovation that coincides with the completion of a total of more than $220 million in renovations at the Resort & Club.