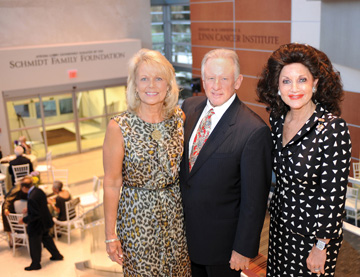 The Marcus Neuroscience Institute, scheduled to open in 2014, got a hefty cash boost in mid-April, when Barbara and Dick Schmidt and the Schmidt Family Foundation gave the Boca Raton Regional Hospital Foundation a $5 million gift for the project.

The neuroscience institute will serve as a state-of-the-art center of care for neurologic and neurosurgical patients.

The institute was established with a recently announced $25 million gift from Boca Raton residents Billi and Bernie Marcus and the Marcus Foundation.

The Schmidt gift will be used to build a 52,000-square-foot addition to the hospital, which will house the Marcus Neuroscience Institute, and be named the Schmidt Family Pavilion. It will contain a 22-bed Neuro Intensive Care and Step-Down unit, two dedicated operating rooms equipped with intraoperative MRI and the latest technology.

“We believe the Marcus Neuroscience Institute is the most important new development in health care in South Florida,” said Dick Schmidt, who has just completed his tenure as two-term chairman of the hospital board of trustees. “It will serve as a destination for expert neurological care from the finest physicians and clinicians coupled with the most advanced technology. The Marcus Neuroscience Institute will transform the lives of many patients suffering from memory and movement disorders, as well as other neurological conditions.”

The Schmidts announced the gift at the Foundation’s Philanthropy Guild Reception, which recognizes the hospital’s most generous donors.

The Schmidt family has a multi-generational legacy of support for Boca Raton Regional Hospital. Dick Schmidt’s parents, Charles and Dorothy Schmidt, were early contributors to the effort to build the hospital in the 1960s. He and his wife, Barbara, and the Schmidt Family Foundation have also given several philanthropic gifts to the Lynn Cancer Institute.