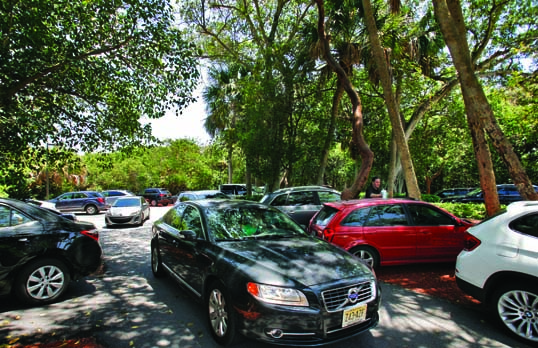 Finding a parking space at Gumbo Limbo can be a challange.

Expanded ocean views on Red Reef Park Executive Golf Course, safer pedestrian crossing on A1A at Red Reef Park, and increased revenue for Gumbo Limbo Nature Center are just some of the improvements that may be in the works in the near future.
The Boca Raton Beach and Park District selected Miller Legg engineering, landscape and architecture consulting firm, to upgrade the park, golf course and adjacent nature center, all on A1A about 1 mile north of Palmetto Park Road.
The contract for the work should be finalized by mid-June, said district acting director Art Koski.
A master plan will be written after getting input from the public, district commissioners and the city, said Mike Kroll, Miller Legg vice president.
The company has no firm directives for improvements, which could include anything from a restaurant at the golf course to parking meters at Gumbo Limbo.
“Everything is on the table,” Kroll said. “We will be looking at existing parking, revenues generated from parking, the safety aspect of crossing A1A and many other possibilities including improvements at the golf course.”
The nine-hole Red Reef Executive Golf Course stretches across A1A from the Intracoastal Waterway to the ocean, but houses obscure most of the water views on the Intracoastal side and trees and shrubs block views of the ocean.
Promoted as an ocean course, golfers are often disappointed when they don’t see the water except for several glimpses through the trees and shrubs.
“One of the things we want to do is to really embrace the oceanfront existence of the golf course,” he said. “That’s a unique element. Most courses on the ocean are private and not easily accessible. If you enhance the golf experience, you’re making it a more unique golf experience. All those things will be discussed. This is a great opportunity.”
Golf course architect Harry Bowers of Signature Design, who worked on the redesign of the 18-hole Palm Beach Par 3 Golf Course, is on Miller Legg’s team and will be involved in the Red Reef course project, Kroll said.
The Palm Beach course, 19 miles north of the Red Reef course on A1A, has views of the ocean and Intracoastal from every hole. Players often describe it as a “mini Pebble Beach,” and Golf Digest magazine called it “one of the best par 3’s you can play anywhere.”
The Red Reef course has limitations that the Palm Beach course doesn’t, said Kroll.
“We’re dealing with very different conditions at Red Reef. It’s not conducive to people playing championship golf, but it has a great clientele of junior and senior golfers.”
Would he be in favor of a restaurant on the course? “If the district said we should, we would,” he said.
The new restaurant on the Palm Beach course pays the city $150,000 a year in rent.
Meanwhile the Red Reef course loses a quarter of a million tax dollars a year, and has a dwindling number of players.
The time frame for the master plan is probably six to nine months, Kroll said, “depending on the amount of public involvement.”
“We have presented some ideas and opportunities,” he said. “Some of the other things we want to address is the safety aspect of crossing A1A. We would work with DOT and make it safer within the park itself. Gumbo Limbo relies on donations and admittance fees. We will look at opportunities for generating more revenue.”
And he wants to enhance the natural environment of the park, course and nature center.
“While I was there, a 500-pound leatherback was on the beach. That’s a fantastic resource. We want to retain animal habitats and integrate recreation along with natural resources. We’ve done that at other coastal parks,” he said.
Miller Legg’s projects have included Calypso Cove Water Park in Boca, Jensen Beach Riverwalk, Plantation Preserve and Golf Club, Rosemont Community Park in Orlando, Royal Palm Yacht and Country Club, and Sandy Ridge Sanctuary in Coral Springs.
Resort clients include the Four Seasons at Emerald Bay Resort in Great Exuma, Bahamas; Royal Palm Resort in Curacao; Sugar Bay Plantation Resort in St. Thomas, U.S. Virgin Islands; and La Hacienda Resort in Egypt.
Established in 1965, the company has offices in Fort Lauderdale, Miami, Port St. Lucie, Winter Park, Saudi Arabia and Dubai.