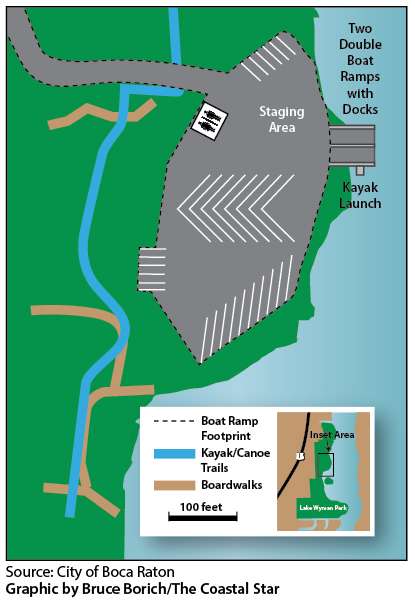 The city plans to triple its number of boat launches in the Intracoastal Waterway by the end of 2019.
City Council members told Jennifer Bistyga, Boca Raton’s coastal program manager, to pursue building two double boat ramps in central Rutherford Park along with one or two kayak launch areas, a restroom and 38 parking spaces for park visitors and boaters with trailers.
They also said they want an elevated access bridge so kayaks and canoes have room beneath to navigate.
“It’s exciting to see this [plan] finally get off dead-center,” Mayor Susan Haynie said.
Bistyga estimated the four new boat ramps would cost $1.5 million, with Boca Raton and the Florida Inland Navigation District each contributing half. The city will pay perhaps an additional $1 million for the elevated bridge.
Bistyga also will apply for permits to revive a 2011 plan to renovate Rutherford and Lake Wyman parks, but with a difference. Council members liked her idea of creating a coastal hammock habitat instead of a submerged seagrass basin that Golden Harbour neighbors just south of the park opposed.
Lenore Wachtel, who lives in the neighborhood, applauded the plan.
“The more activity we get there, the less homeless there will be,” she said.
The council made its decision at an Oct. 11 workshop. Bistyga also presented an option for four boat ramps at the northern end of Rutherford Park, but that location was close to residents and would allow only 24 parking spots, council members said.
The four new boat ramps would augment the city’s double boat ramp at Silver Palm Park, which quickly fills to capacity on holidays and weekends. Boaters there pay $20 a day or $55 a year to launch vessels and park trailers.
The Rutherford boat ramps will destroy .31 acres of mangroves and .09 acres of seagrass, which can be offset by other parts of the proposal, Bistyga said.
The new plan may be bad news for the owner of 7.4 vacant acres at 3822 S. Ocean Blvd. in Highland Beach, just south of the Toscana condominium towers. Golden City Highland Beach LLC had offered up to $1 million to plant and maintain mangroves where the boat ramps will be to obtain mitigation credits from the state for a construction project. Bistyga said she would update the developer as the plan progresses.
At a Nov. 1 meeting of the Federation of Boca Raton Homeowner Associations, Bistyga assured the Golden Harbour neighbors that the area closest to them would become an upland coastal hammock.
“We would not be doing any submerging,” she said.