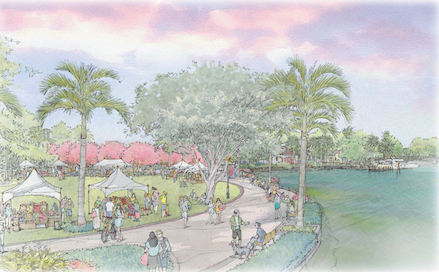 The Wildflower parcel would be transformed into an urban oasis with flowering trees if Boca Raton adopts the master plan. EDSA Inc. via City of Boca Raton

If the city does nothing else with its parks, it should turn its Wildflower parcel into a park, combine it with neighboring Silver Palm Park and create a “destination waterfront park” downtown, its consultant says.

EDSA Inc., charged with developing a comprehensive plan for all of Boca Raton’s waterfront parks, was asked after its work began to also examine the city-owned Wildflower site.

“We found out … that that property is pretty crucial,” EDSA’s Kona Gray said at a Dec. 11 City Council workshop.

Gray showed two concepts for the site, at the northwest corner of the Palmetto Park Road bridge over the Intracoastal Waterway. One had slightly more parking spaces but a smaller event lawn.

Participants at a public outreach meeting in July preferred a blended approach, choosing a larger event lawn, a boardwalk connected to Silver Palm Park and suggesting additions such as a stop for a water taxi, Gray reported.

“What you have right now is a major opportunity to take advantage of this gateway at Fifth [Avenue] and East Palmetto Park. It’s pretty tremendous,” Gray said.

EDSA was not asked at first to look at both the Wildflower site and Silver Palm Park.

“But as master planners when you look at something holistically, you’ve got to kind of understand really how all the pieces come together,” Gray said. “This is a bigger vision, this is a long-term vision.”

Gray said the city’s first step toward creating a destination park would be to enhance the Wildflower entrance with a “magical entry drive with colorful flowering trees.” A “green” parking lot would transform to be a “parking lot when we need it and become park when we need it.”

The planners also thought Wildflower should have a playground, a play area and a splash pad. “My nieces live right up the street from here, so I’m here every weekend with them, and you’ve got to get them out because they’re very active and they want playgrounds,” Gray said.

He urged the City Council to purchase the vacant lot at the northeast corner of Palmetto Park and Fifth, which would allow people on foot to make their way “seamlessly” into the site.

The park could be used for an arts festival, farmers market and other events, Gray said. Eventually a boardwalk under the Intracoastal bridge and over the water would link the Wildflower and Silver Palm parks together.

“We’re designers, we’re landscape architects, but what we do is we facilitate action,” Gray said.

Changes at Spanish River Park include a new lookout tower and enhancements for playgrounds, the tunnels under A1A and a little-known boat dock on the Intracoastal.

Red Reef Park would get an enhanced entrance and pavilion and have its boardwalk extended.

“At South Beach people really wanted to be on the beach. This is all about beach activities,” Gray said.

“Right now it’s just a little bit tired. It’s nice, but it could be a lot nicer.”

Palmetto Dune Park would get a dog park, a drop-off area and a launch for non-motorized boats.

Mayor Susan Haynie thanked Gray for his work. “You really captured what our community wants out of these waterfront parks,” she said.

Gray will return in about a month with economists’ projections on what his big-picture concepts might cost.

“I keep saying this over and over again to all of our clients, if you don’t start you’ll never finish,” Gray said. “So let’s get started.”