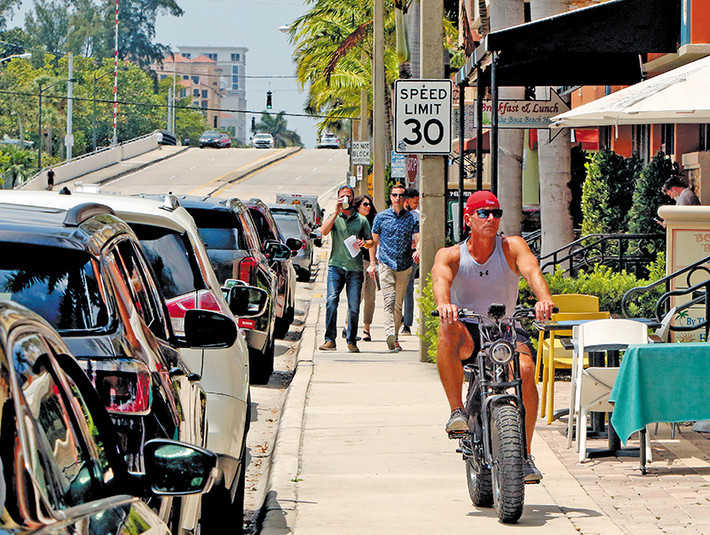 Call for upgrade gets council’s ear

City Council members are being pressed to improve the safety and appearance of Palmetto Park Road, one of the city’s major streets and a gateway to the downtown from the beach.
Beachside residents who live near the intersection of Palmetto Park Road and State Road A1A, and members of the Planning and Zoning Board have advanced ideas for changes that council members will discuss at their May 12-14 goal-setting sessions.
The focus of beachside residents is the section of the road from the Intracoastal Waterway to A1A. The planning board is looking at the span from A1A through downtown to Fourth Avenue two blocks west of City Hall.
Both agree on the need for traffic-calming devices, bicycle lanes, more trees, better walkability and safety improvements.
“It is the grand gateway to our beaches, but not welcoming,” Katie Barr MacDougall, president of the Riviera Civic Association, told the council on Feb. 22 about the eastern section of the road.
In her presentation, MacDougall cited safety problems caused by the absence of crosswalks. She proposed installing them at Olive Way and Wavecrest Way. The city recently added four crosswalks between Federal Highway and the Intracoastal Waterway.
The lack of bicycle lanes creates a big safety issue involving cyclists who use the sidewalks instead of competing with cars on the road.
The narrow sidewalks are another issue, a problem worsened by the recent installation of FPL poles on the south side of the road that eat into sidewalk space. “Walkability is a huge issue,” MacDougall said.
Beachside residents also want to reduce parking on both sides of the road, but MacDougall recognized that would be difficult because there is too little parking to meet demand. 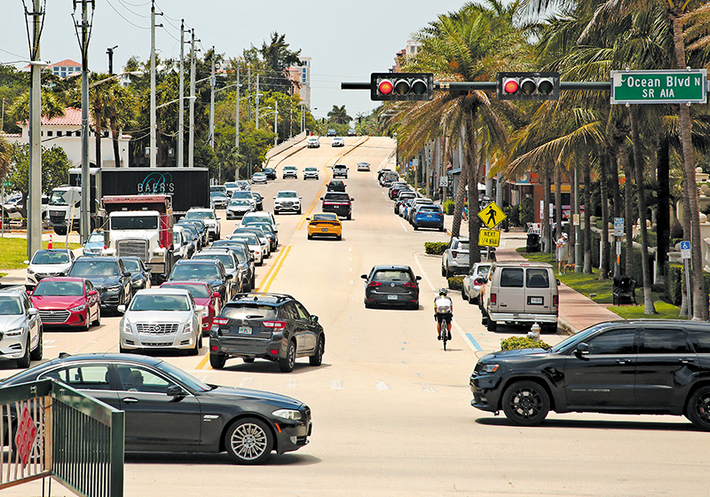 But even if the city wants to act on these matters, the county would have to agree to any changes because that section of the road is under county jurisdiction.
Council member Andy Thomson said he would talk with the county’s Transportation Planning Agency about possible joint funding of a planning study for the road and to figure out a way to pay for improvements.
The city planning board first broached road problems on Dec. 3 and followed up with a Jan. 7 memo to City Council members suggesting updating the road design to include bicycle lanes, enhanced landscaping, more shade for pedestrians, and possible elimination of some on-street parking spaces and reduction of travel lanes from four to two.
“The whole street needs a makeover … to bring it into current times,” said board member Larry Cellon.
Speaking of the need for bicycle lanes, he said, “This is horrible. Boca Raton has higher standards than that. It is dangerous.”
In response, the City Council asked board members for more details on what changes they proposed.
Brandon Schaad, the city’s development services director, suggested that board members take a crack at redesigning the road themselves, using a software tool.
“You caught me by surprise,” Chair Arnold Sevell replied at the board’s March 18 meeting.
“I question the capabilities of this board to lay out streets and redesign Palmetto Park Road.”
The actual redesign would be done by an urban planning consultant, Schaad said. But the board’s conceptual design would help the City Council better understand what the board had in mind.
After mulling this for a bit, the board agreed to give it a go. “Can we see your design first?” Cellon quipped to Schaad.
Cellon jumped into the task with alacrity, presenting his concepts at the board’s April 15 meeting.
His plan’s emphasis was on slowing traffic, adding bike lanes, improving walkability and adding shade trees.
He proposed two westbound lanes and eliminating one eastbound lane. The lanes would be narrowed slightly to slow traffic. The other eastbound lane would be replaced by a center lane reserved for emergency vehicles that could double as an evacuation lane in the event of hurricanes.
One unanswered question was whether fire-rescue personnel would think the emergency lane actually is a good idea.
Four-foot-wide raised bike lanes would flank both sides of the street, and sidewalks would be 10 feet wide. Shade trees would be planted on both sides of the emergency lane, and would be incorporated into the sidewalks.
“It’s a great concept,” said board member Joe Panella. “The emergency lane is cool.”
But he cautioned that Palmetto Park Road should be considered as three sections, divided by Federal Highway and the Intracoastal. One conceptual drawing will not solve the different issues along the three sections of roadway, he said.
Panella also proposed recommending that the council hire an urban planning consultant soon so that planning moves quickly and avoids a “12-year design project.”