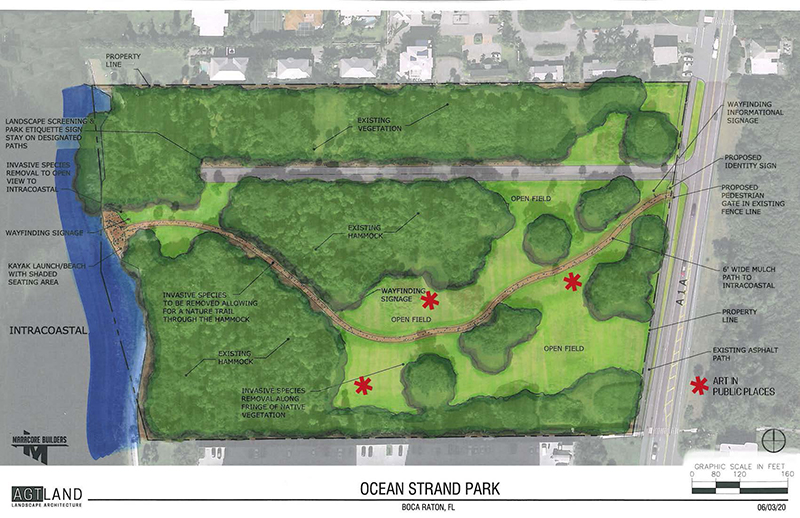 A new gate at the entrance to Ocean Strand will give pedestrians access to a 6-foot-wide mulch trail leading to the Intracoastal. Bicyclists can coast down the park’s old asphalt road. The current gate will continue to keep cars out. Kayakers can paddle in from the west. Rendering provided

Ocean Strand, which will soon open to pedestrians and bicyclists as a minimal park, is an acre larger than commonly thought. And its price tag was almost $1.3 million more.
News outlets including The Coastal Star have routinely reported with various rounding that Ocean Strand’s 15.2 acres cost $11.88 million.
But those are just the numbers from the original 1994 purchase. To straighten Ocean Strand’s northern boundary, the district in December 1999 bought the home of William Veit, at 937 Ocean Strand, for $475,000, property records show. Ocean Strand was also the name of the street that runs through the tract.
Eight months later the district agreed to pay Veit’s neighbor, Electa Pace, almost $800,000 for two parcels that made up her home at 955 Ocean Strand. The settlement came after she sued the district claiming it was letting the surrounding land deteriorate in an effort to make her property less desirable.
It was Pace’s tireless lobbying of city and district officials that led to the purchase of Ocean Strand in the first place. She started her campaign after a developer announced plans to build 79 condominiums and six beachfront homes on the site.
“It’s the ultimate irony,” attorney Robert Sweetapple, who represented Pace in the dispute, told the Sun-Sentinel newspaper at the time.
The differing figures for Ocean Strand’s acreage came to light after the Beach & Park
District in June filed a declaration of restrictive covenants with Palm Beach County stating, “Any and all future uses of the Property shall be limited to open space, which shall include parks and recreation uses.”
Accompanying the declaration was a sketch of Ocean Strand with the former Pace and Veit parcels labeled “not included.”
District attorney Jacob Horowitz, who drafted the declaration, could not immediately say whether he would need to amend the document.
“Please allow us to review. We will follow up further shortly,” Horowitz said in an Aug. 26 email.
Meanwhile, a team from Maracore Builders and AGTLand Landscape Architecture was on-site surveying the coming park in late August.
Maracore, the only bidder for the $100,000 project, plans to clear exotic Brazilian pepper trees from about one-fifth of the 13.2 acres west of State Road A1A and install a pedestrian gate at the entrance opening to a mulch trail that meanders across Ocean Strand and connects to a new kayak beach on the Intracoastal Waterway. Two picnic tables with benches will also be installed.
“It’s more of a destination point” rather than a launch site, Carol Perez of AGTLand said of the kayak area.
The gate keeping A1A traffic out of Ocean Strand will remain. The beach portion of Ocean Strand will also be off-limits.
While the plan shows three spots where public artworks could go, none will be installed at this time.
Beach & Park District Commissioner Robert Rollins and Maracore President Nate Custodio both mentioned having heard “rumors” of a Native American burial ground in Ocean Strand while reviewing the construction plans at an Aug. 11 meeting.
But the district’s settlement with Pace seems to memorialize the existence of Indian artifacts there:
“The parties further agree that Plaintiff’s dog ‘J.J.’ is buried in an archeological midden located on the North side of the property. Defendants shall not disturb this marked grave during construction,” it reads.
The district plans to open Ocean Strand by year’s end.Ú